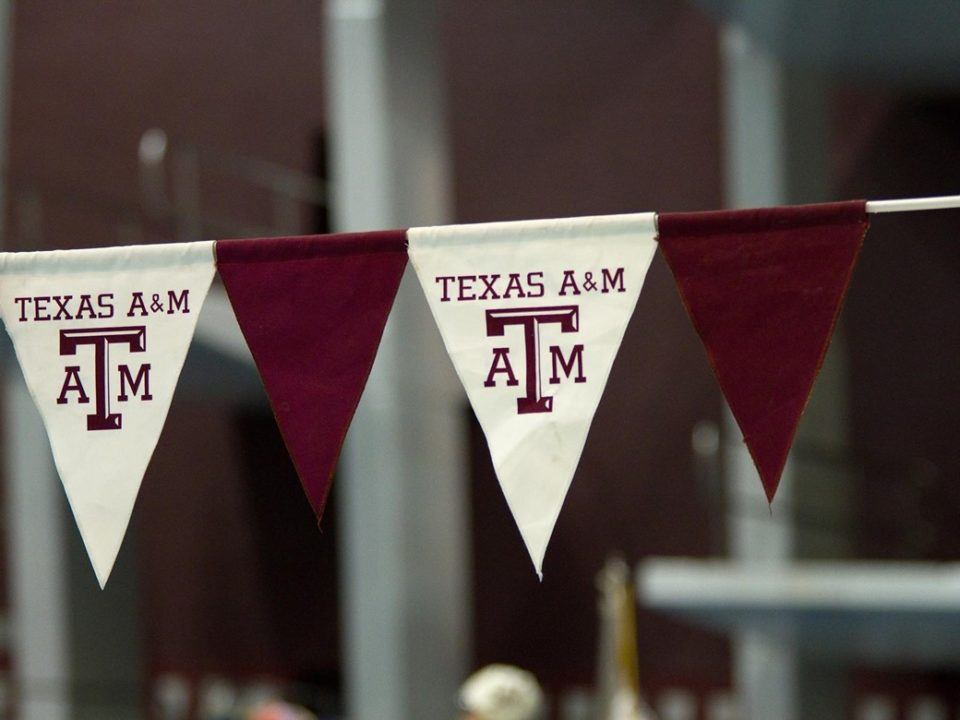 Texas A&M head women’s swimming and diving coach Steve Bultman announced seven standout swimmers have signed with the Aggies and will join the team for the 2017-18 season.

“I’m very pleased with this signing class – both swimming and diving,” Bultman said. “I think this group is capable of filling some events that we needed to take care of. They are all talented and been very well-coached, but I think their best swimming is ahead of them. I’ve watched a number of these girls from Texas swim for a few years and I’m excited to see how their futures will unfold at Texas A&M.”

Belousova was No. 8 recruit in the nation by CollegeSwimming.com and No. 16 nationally by SwimSwam.com. Originally from Russia, Belousova trains with the Nation’s Capital Swim Club in Bethesda, Maryland. She was the silver medalist in the 200-meter IM at the 2016 Russian national championships and won the gold in the 50-meter breaststroke at the 2014 Russian nationals. She helped the Russian national team to a bronze medal in the 400-meter medley relay at the 2013 FINA World Championships.

“Texas A&M has great academics and the best coaches in the world,” Belousova said.

Eisenmann earned first-place finishes in the 100 and 200 butterfly at the 2016 Futures Championships and has been a member of multiple summer and winter junior national teams. A three-time Texas state qualifier, Eisenmann has been a state finalist five times – three times in the 100 fly and twice in the 100 back. She owns Lewisville High School records in the 50/100/200/500 free, the 100 back and the 200 IM.

“I felt a connection with the school and with the team that I hadn’t felt before,” Eisenmann said. “I was looking for a swim team that had a supportive, positive, and dedicated atmosphere, as well as a school that would help me pursue my academic interest in engineering; Texas A&M fit like a glove.”

No stranger to Texas A&M’s Student Recreation Natatorium, Field, from nearby Magnolia, Texas, was ranked No. 19 senior recruit in the nation by SwimSwam.com. Field has represented Team USA on several junior national teams, finished 11th in the 800-meter freestyle at the 2016 U.S. Olympic Team Trials and has won multiple individual junior national titles.Competing for Magnolia High School, Field has earned a medal in the 500 freestyle at three straight state meets and owns school records in the 500 free and 200 back and with all three relays.

“I chose Texas A&M for its great academics and athletics,” Field said. “I am confident that Texas A&M is the best place for me to meet my goals in swimming and achieving academic success. I enjoy the culture at Texas A&M.”

“I chose A&M because as soon as I got there the team was so welcoming and immediately made me feel at home, McMurry said. “The team is very competitive but they also enjoy swimming and having fun. I also believed that the training and coaching will help me to succeed at the college level.”

“Steve, Tanica and the Aggie girls have created a strong, consistent, world class swimming legacy,” Pike said. “Aggies are the most passionate, classy and friendliest people that I have ever met.”

“Texas A&M felt like home, the team and coaching staff felt like family, and the academics were exactly what I was looking for!” Toney said.

Yelle was an Olympic Trials qualifier in the 400- and 800-meter freestyle races last summer. She earned seven medals at Junior Nationals from 2014-16, and she was a three-time Future Championships medalist in 2015. She participated in the 2015 National Select Camp. Competing for Mansfield Legacy High School, Yelle earned all-state honors in the 100 fly, 200 IM, 200 free and 500 free.

“I chose Texas A&M because I felt like I belonged there,” Yelle said. “I love all the traditions and the Aggie spirit, and on top of that it’s an amazing school with an amazing swim team.”

Another strong class, will help keep the Aggies among the elite programs in the nation. No doubt there will be even bigger things in the future for this group because you can always count on improvement when you join Coach Bultman and Coach Jamison in College Station.