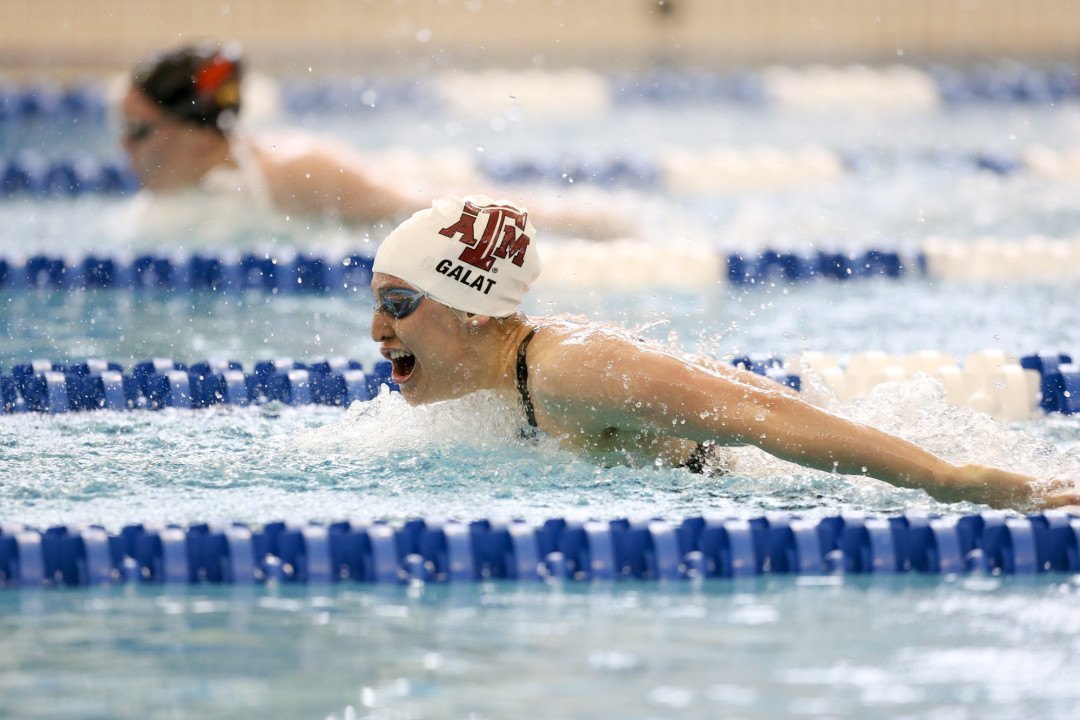 The No. 7-ranked Texas A&M women’s team finished their fall semester in dominant fashion with a win over the Rice Owls. Texas A&M won every single swimming event, and swept the podium (first through third) in seven different events.

COLLEGE STATION, Texas – The No. 7-ranked Texas A&M women’s swimming team concluded the fall portion of its 2016-17 season with a 150.5-99.5 clean sweep over Rice on Saturday afternoon at the Student Recreation Natatorium. The Aggie divers also took on the University of Houston with second- and third-place finishes in both dives.

“We had good, solid racing all the way through and it’s a good way to keep them engaged and competitive instead of taking a long break from the invite until our first meet in January,” head coach Steve Bultman said following the meet. “Between now and when exams end, we are just trying to maintain conditioning. While school is out of session and we are back here training, we will start gearing people up for SECs. We have about 10 girls qualified right now [for NCAA’s], but we want to get more girls qualified.”

The Aggies concluded their fall portion of their season 4-1 in dual meet action, undefeated in SEC competition, and as champions at the Art Adamson Invitational. Texas A&M will begin the second half of their season on Saturday, January 7 against the Auburn Tigers.

Texas A&M won all 14 races against Rice, while claiming the top three spots in seven races and finishing 1-2 in four others. Leading the way for the Aggies was junior Bethany Galat with first place finishes in the 200-yard butterfly (2:01.62) and the 200 IM (2:02.12). Trailing Galat in the 200 fly were sophomores Alexandra Buscher and Tiffany Futscher, while sophomore Sydney Pickrem and junior Lisa Bratton rounded out the top three in the 200 IM.

The Aggies opened the meet by claiming the top two times in the 200-yard medley relay. The trio of juniors Lisa Bratton, Jorie Caneta, and Galat gave the Aggies a strong lead and redshirt freshman Raena Eldridge anchored the Aggies to a winning time of 1:42.15. The foursome of junior Laura Norman, junior Franko Jonker, freshman Golf Sapianchai, and junior Kristin Malone claimed second.

Bratton also clinched a win in the 100 back in 55.32. Trailing Bratton in second and third were Norman and freshman Sam Siebenaller. Norman also had an individual victory in the 100 free in 51.04 just edging out freshman Amy Miller with a time of 51.47.

Caneta came away with an individual victory in the 100 breast (1:01.02), which was a NCAA “B” qualifying time. Jonker was close behind in second (1:01.72) with senior Ashley McGregor in third. Caneta and Jonker went 1-2 in the 200 breast with Jonker touching first in 2:12.70 and Caneta following behind in 2:13.39, both earning “B” qualifying cuts.  Junior Esther Gonzalez claimed third. Gonzalez also earned an individual victory after her strong, long distance performance in the 1000 free (10:11.88).

Other Aggies first place times were senior Sycerika McMahon who dominated the 500 free after winning by over six seconds with a time of 4:54.07 and freshman Sara Metzsch in the 200 back in 2:00.55, which was her first individual win. Eldridge also claimed her first individual victory of the season in the 50 free with a time of 23.47, with Sapianchai coming in a close second (23.82). McGregor touched first in the 100 fly (55.58), with Eldridge and Sapianchai rounding out the top three, and sophomore Claire Rasmus winning the 200 free in 1:48.67.

Across the natatorium, the dive team took on the University of Houston and claimed second and third in both dives. In the one-meter, sophomore Alais Kalonji scored 257.48 to earn second with junior Zoe Alaniz take third. In the three-meter dive, senior captain Madison Hudkins placed second with 305.48 and Kalonji was third.

Closing out the meet for the Aggies was the foursome of Eldrige, Rasmus, Siebenaller, and Metzsch who clinched the 200 free relay victory (1:34.96).

There was no press release available from Rice University at the time of the posting of this article.

They still have to swim Auburn, North Texas, SMU, and LSU. So, I wouldn’t consider their regular season over with just yet.

Good catch. It was their last meet of the 2016 season, but they definitely have more in 2017. The correction has been made.