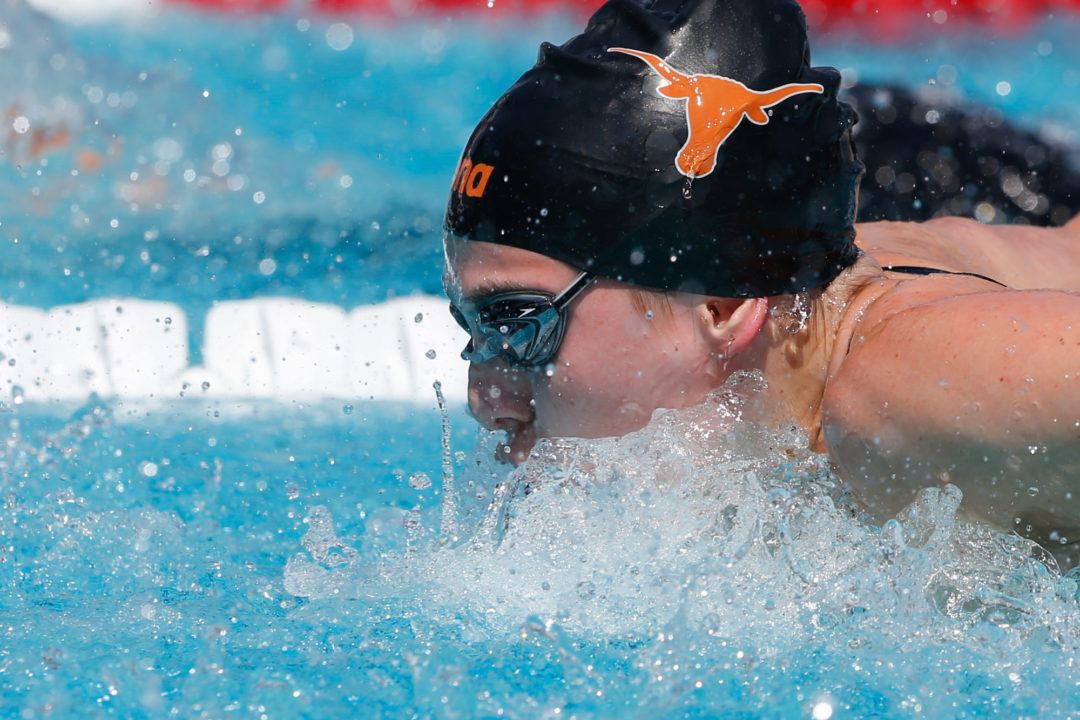 Aly Tetzloff came up big for Auburn, winning the 50 free and 100 fly, as well as providing a quick split on the 400 fre relay. Stock photo via Texas Athletics

Auburn played host to Texas in a dual meet on Thursday, January 10th, at Martin Aquatic Center. Texas pulled out somewhat comfortable victories in both meets, despite only winning a combined 17 of 32 events, although Texas’ men did swim exhibition (not for points) in the last two events. Daniel Krueger returned for Texas after missing the mid-season invite due to illness.

Santiago Grassi took the 100 fly decisively for Auburn, swimming a 47.47 to win by over a second.

AUBURN, Ala. – The No. 2 Texas Men’s Swimming and Diving team knocked off the Auburn Tigers at the Martin Aquatics Center on Thursday afternoon, 164-131.

AUBURN, Ala. – Auburn’s swimming and diving teams gave Texas all it could handle in a pair of dual meets on Thursday afternoon at the Martin Aquatics Center. The No. 17-ranked Auburn women’s team won eight events but fell to the top-ranked Longhorns, 161-139, while the unranked men were first to the wall in five races in a 164-131 loss to No. 2-ranked Texas.

WOMEN’S RECAP
Auburn came out of the gate fast, winning the women’s first diving competition as well as the first three races.

“We came out swinging,” Auburn head coach Gary Taylor said. “Our women did a fantastic job. Texas is number one in the country for a reason. They were fantastic and the meet came down to the end and I couldn’t be more prouder of the fight, energy and determination our women brought from start to finish.”

“Aly’s performances were really out of this world,” Taylor said. “They were on a whole different level. We kept out of the relay up front and gave her three opportunities individually. She came out and hammers in the backstroke with a lifetime best, comes back in the 50 and goes 1-2 with Claire and then has her best performance of the season in the 100 fly. You really can’t ask for me.”

MEN’S RECAP
Liam McCloskey swept the sprint freestyle events and Santiago Grassi was a top-2 finisher in both butterfly events as Auburn battled the four-time defending NCAA Champions to the end.

“The challenge all year, regardless of outcome, regardless of where we are in the meet, you never quit, you never walk away,” Taylor said. “The character of this team has really come out the last couple of weeks and we I saw it all fall. I’m incredibly proud of their fight, their heart and their grit. They never give up and they never walk away. If that’s something you can say about a team, that’s something I can be proud to stand behind.”

DIVING RECAP
Alison Maillard and Conner Pruitt each collected a personal-best during a meet against one of the top diving programs in the country.

“It was a pretty solid day,” diving coach Jeff Shaffer said. “Texas has some outstanding divers and it was good for us to step up and compete against them.”

Maillard scored a 358.28 to easily win the 3-meter competition. That score bested her previous lifetime best of 345.10 by over 13 points, which was also her margin of victory in the competition.

“Kudos to Alison with her personal best on 3-meter,” Shaffer said. “She hit all three of her big dives and they are coming and that’s encouraging and exciting to see.”

“We give up a lot of DD on 1-meter (on the men’s side) doing back one-and-halves to our competitors back two-and-a-halves,” Shaffer said. “Conner was consistent and Logan had another Zone Qualifying Score, so that was positive. Conner came away with another personal best on the 3-meter and competes his reverse three-and-a-half again. If had been a little firmer on his kick-out he would have scored pretty well. Every time we step on the boards, whether it be practice or in a meet situation, we have an opportunity to learn and get better and I like where we are headed.”