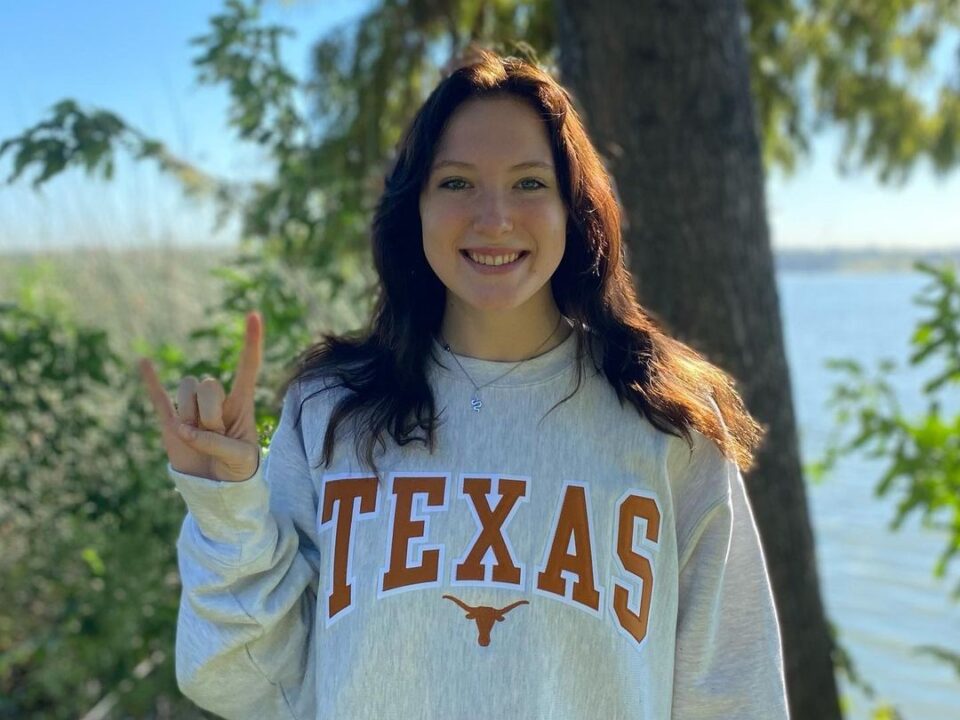 Campbell Chase, a USA Swimming Scholastic All-American from Dallas, Texas has announced her intention to remain in-state to swim and study at the University of Texas in the class of 2028. The number 18 recruit on our Way Too Early list of top girls from the class of 2024, she wrote on social media:

“I’m thrilled to announce my verbal commitment to further my athletic and academic career at the University of Texas!! I’d like to thank my parents, my coaches and teammates at COR for helping me achieve this dream! And a big thanks to the awesome coaches at Texas for giving me this opportunity! HOOKEM🤘🧡🤍”

Chase is the daughter of Lydia Morrow Chase, an All-American breaststroker on the last Texas squad to win national championships (1990 and 1991). Her maternal grandfather ran cross-country for the Longhorns. Her parents met while earning their MBAs at Texas and named her after Earl Campbell. Her father, Steve, recounted to SwimSwam “… So of course she said she wasn’t going to go to Texas! [But] Carol and Mitch won her over.”

Chase does her year-round swimming with City of Richardson Swim Team. She earned a slew of PBs at the NCSA Spring Championships in March, including the 100 free, 50 back, 100 breast, and 200/400 IM. She was runner-up in the 200 IM and came in 4th in the 400 IM. Over the course of her sophomore year in high school, she improved her times by 4.7 and 8.8 seconds, respectively, in the two events.

Chase will join the Texas class of 2028 with #8 Piper Enge. The Longhorns came in second place at the 2022 NCAA Swimming & Diving Championships behind only Virginia, who won national crowns in both 2021 and 2022. It was Texas’ best finish since 1994.