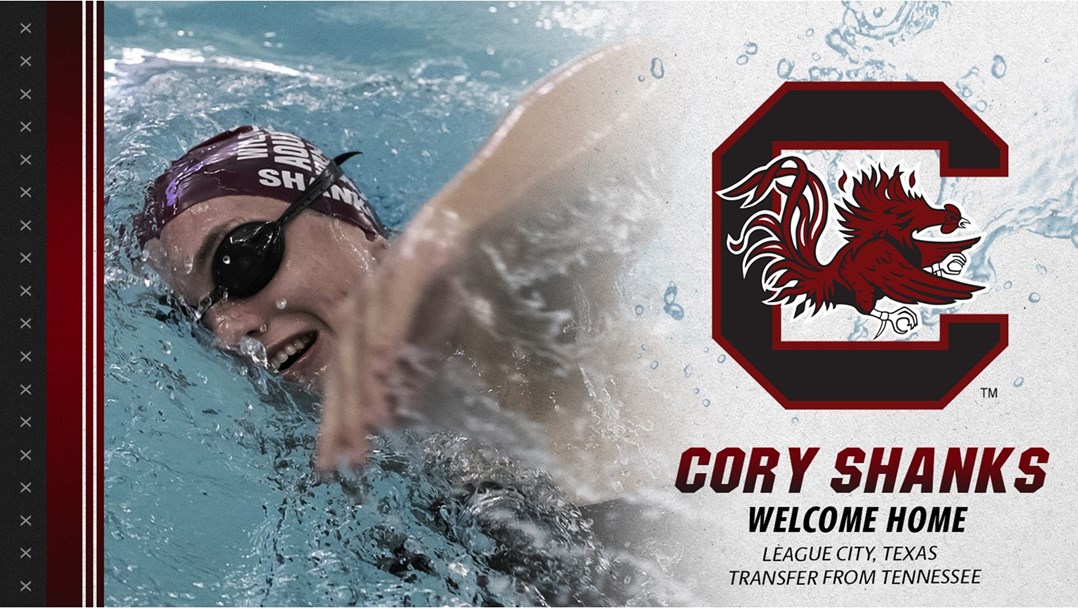 Cory Shanks, the 2021 Texas High School State Champion in the 50 and 100 yard freestyles, was committed to Tennessee, but will instead start her college career at South Carolina. Archive photo via South Carolina Athletics

The University of South Carolina has announced that Cory Shanks will transfer to the program, joining the Gamecocks in January 2022. Shanks was committed to begin her career at another SEC program, the University of Tennessee, this fall.

A native of Houston, Texas, Shanks trained with the South Shore Sails through high school. That includes in the leadup to racing at the 2021 US Olympic Trails – Wave I meet. At that Wave I meet, was for the slower set of Olympic Trials qualifiers, she finished 16th in the 100 free, earning a B-Final swim, and 24th in the 50 free.

Prior to those Trials, Shanks won the Texas 6A (big schools) State Championship in both the 50 and 100 yard freestyles in March – in spite of being just-off her best times in both races.

For new South Carolina head coach Jeff Poppel, who came to the school from another SEC rival at Florida, this addition will be a huge boon to his first season with the Gamecocks. South Carolina finished 11th out of 12 women’s teams at the 2021 SEC Championships. Shanks’ best times are already faster than any South Carolina swimmer from last season aside from rising junior Janie Smith (22.38/48.69).

Smith was also the team’s best 100 butterflier last season (53.39), so Shanks will relieve some medley relay pressure as well.

This means, at a minimum, that Shanks will be able to boost the team’s relays. She also already has best times in the 50 free, 100 free, and 100 fly that would have scored at last year’s SEC Championships.

Poppel has been able to improve his team very quickly thanks to transfers. In addition to a pile of male transfers, the women’s team has added Nicholle Toh from New Mexico. She’s a butterflier, with some versatility in other strokes. Her 53.45 in the 100 fly last season was just-slower than Smith’s team leader, and her 1:58.32 in the 200 fly is faster than any South Carolina woman swam last season.

For Tennessee, a program that itself has been boosted by a number of big transfers for this season, this hits to the long-term core of the program, as they become a little short on sprint depth after this season, depending on who uses a 5th year of eligibility.

Weird. She was only on campus a month before started taking visits again. Wonder what happened. Wishing her the best at SC though! Life’s too short to not be happy somewhere

There is always more to the story

Interesting with UVAs Pennington and Shanks leaving so quick. Wonder if by choice as those two programs don’t normally lose athletes?

That’s their own faults lmao

Did you sleep through the pandemic and it’s impact on recruiting and on campus visits?

UVA has lost a lot of athletes but most of them have quit not transferred. Tennessee seems to pick more transfers up than have them transfer out. Let’s not blame the young athletes. These have been crazy times.

where did pennington go?

How can someone transfer after attending a college in the fall and be eligible in January? Has something changed in the rules re this transfer rule?

She never competed and possibly never even started class, so she’s essentially just delaying her enrollment a semester.