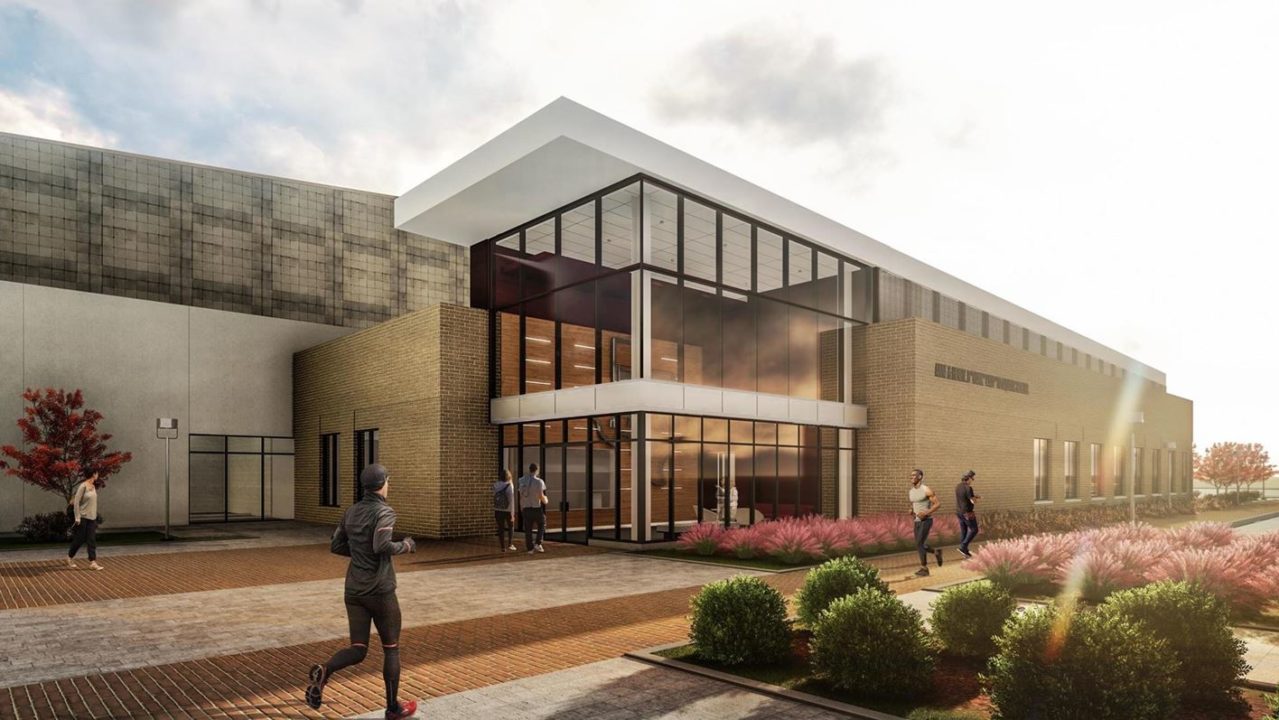 The facility is named in honor of Anne S. & Henry B. “Hank” Paup ’70, who were the lead donors for the project, which will serve the school’s varsity swimming and diving programs.

Included in the new facility are new locker rooms, several drylands training areas, coaches offices, a fueling station, and a redesigned lobby that has a separate entrance to the pool from the rest of the recreation facility.

The school announced the facility’s construction in October of 2019. According to the school, the facility will be finished this fall with an opening ceremony tentatively scheduled for January 2021.

Texas A&M hosted the 2009 NCAA Championships at the Rec Center Natatorium, which is the campus’ primary pool. Although this most recent project doesn’t involve any direct renovations to that pool, in 2018 the program opened a new 8-lane, 25-yard Pool and made renovations to the 50-meter pool.

The Paup family, accompanied by head coaches Steve Bultman and Jay Holmes, visited the facility in August for a tour of the progress as they walked through the dryland diving training center, nearly completed locker rooms, expansive athletic training room and coaches’ offices. They began the tour laying a brick on the front side of the building and concluded the day sharing a moment with members of the swimming & diving teams.

“When I was on the swimming team at Texas A&M (1966-70), I could never have imagined having the opportunity to contribute back to the swimming & diving program with this expansion to our current world-class natatorium,” said Hank Paup, Class of 1970. “The addition of locker rooms, coaches’ offices and training facilities will greatly enhance the resources our student-athletes need to train and compete at the highest level. Anne and I are honored to be in a position to share some of our lifelong blessings in order to lead on this project.”

The facility is scheduled to be completed this fall, with a grand opening slated for January 2021. Remaining in the same location, the facility project will provide significant upgrades and additions that will allow the teams to be in a central location and feature new locker rooms, coaches’ offices, an athletic training room area, dryland training space and fueling station.

The most noticeable change will be the addition of a highly-visible exterior lobby that will provide student-athletes, coaches and fans with a designated entrance, separate from that of the main Recreation Center. The lobby will showcase A&M’s history and accomplishments, featuring graphics and a large, built-in trophy case.

The team locker rooms will see significant upgrades as each student athlete-will have a solid-surface locker with wet and dry storage areas. The locker rooms will be accessible off the pool deck and feature a wet storage area upon entry. The men’s and women’s locker rooms will be separated by a shared 840 square-foot team lounge and fueling station. A large sectional sofa, TV, tables and chairs will fill the lounge area, while a center island, custom snack display, refrigerator and separate pantry on the other side of the room will put a plethora of healthy snacks and refueling options in arms-reach for student-athletes on the go.

The Aggies will add a dryland training space that will include a 20’x25′ in-ground foam pit with three diving boards, as well as a 16′-6″x42′ tumbling area with a gymnastics spring floor. A 10’x17′ in-ground trampoline pit and a 12’x15′ above-ground landing mat with two diving boards will be added for top-level diving training.

Just tremendous👍👍. Thanks Hank & Anne!! Can’t wait to get a chance to see it/ maybe tour it(?) when it is completed. World class facility for world class athletes👍👍. Gonna be gigging em forever 👍!!!

I have always heard walk-ons and managers give back the most!

Good for them Aggies!!

They should have named this one after Eddie Reese as well.

Pretty cool that a former swimmer there gave back to that degree. Way to go, Hank and Anne.

With a handful of cash and then some