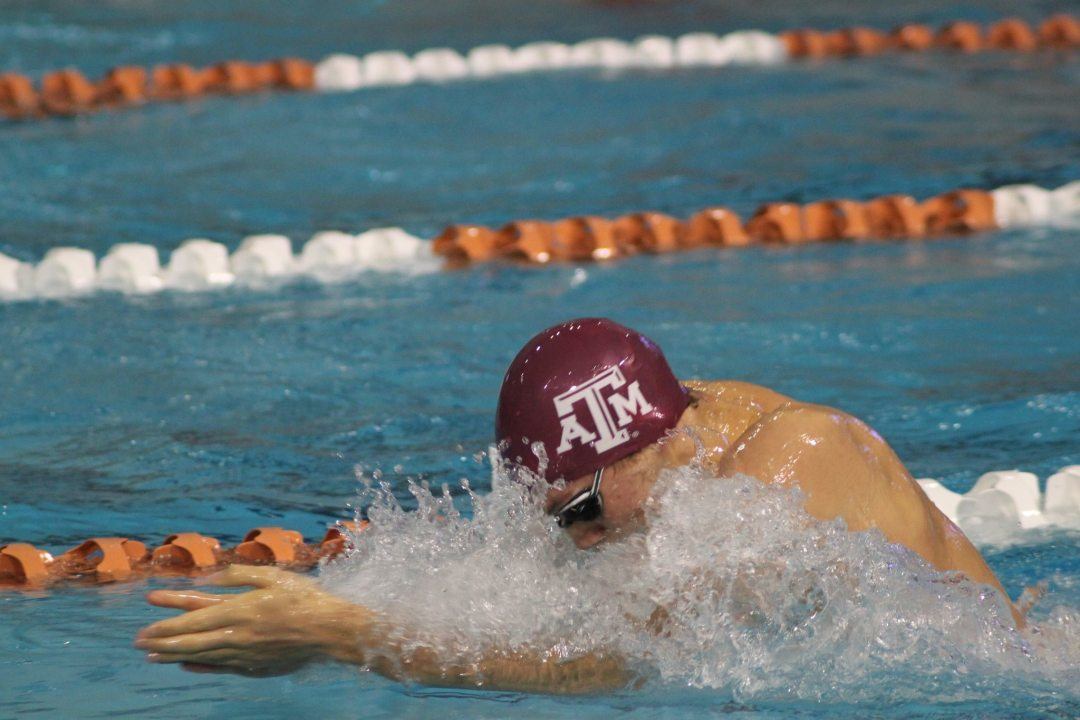 The Aggies pulled off a nice road win to take a conference victory off of Lousiana State. LSU was ranked #22 in the latest CSCAA poll, while Texas A&M was among those “also receiving votes”, so it was expected to be a tight matchup. The Aggies took several key races over the course of the day to emerge victorious 158.5-141.5

A&M set the tone right away, winning a fast 200 Medley Relay and taking 1-2 in the 1000 freestyle. On the relay, both teams had near identical splits before Jacob Gonzales propelled A&M forth with a 19.6 anchor leg.

The teams traded back and forth into the first diving break. Brock Bonetti had one of the decisive races for A&M, he won the 100 backstroke by just .02, holding off a hard charging Logan Rysemus, 48.11 to 48.13.

Diving was also key in the Aggie victory. Sam Thornton out scored all comers in the 1M alongside finishing 2nd in 3M. Skyler Lake‘s 3M victory made it almost impossible for LSU to come back.

The Tigers fought hard, particularly in shorter races but couldn’t string together enough momentum to win. Rysemus was outstanding (47.88) in a first place 100 fly swim. Likewise Alex Linge bounced back from a defeat at the hands of Gonzales in the 50 to win the 100 freestyle by over a second.

Brandon Goldman broke the trend with two longer event wins. He took both the 200 butterfly and 400 IM for LSU.

Expect these two teams to fight it out once again at the 2016 SEC Championships next month. Just 16.5 points separated them in the competition last year.