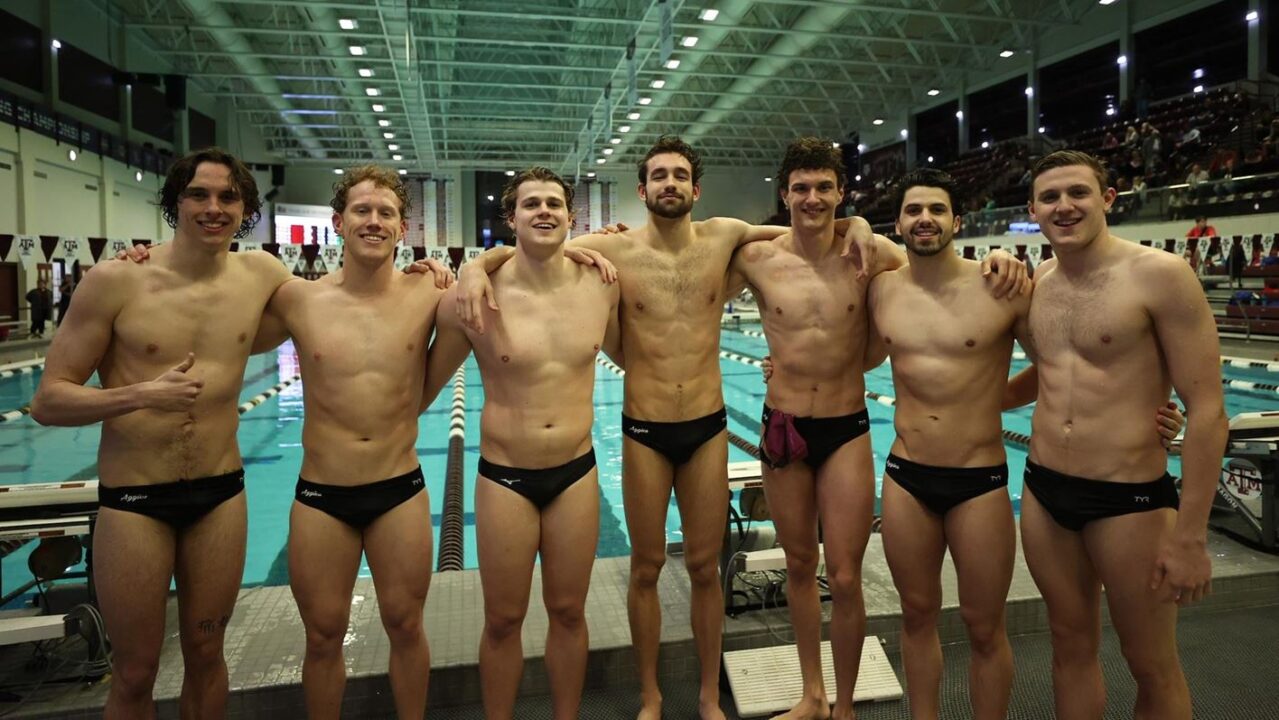 Texas A&M rolled to a second consecutive sweep on Friday against SMU, sending out its senior class in style with a pair of dominant victories at home. Current photo via Texas A&M Athletics

Texas A&M rolled to a second consecutive sweep on Friday against SMU, sending out its senior class in style with a pair of dominant victories at home.

The Aggie women posted the fastest time in each and every event as they eased to a 174-114 decision over the Mustangs, while the Texas A&M men cruised in for a final tally of 178-115.

Hepler’s 100 fly swim was a new season-best, improving on her 55.90 from a December clash with Rice, while her 200 free time falls less than a second shy of the 1:49.64 she posted at the Art Adamson Invitational in November.

Overall, the Aggies had strong performances from underclassmen, including freshman Sarah Holt producing her third sub-2:00 200 fly of the season for a big victory. Holt, who set a best time of 1:58.95 last weekend against LSU, was 1:59.44 to lead SMU’s Olivia Grossklaus (2:01.00).

In the 200 back, first-year Aviv Barzelay posted her fastest non-invite time of the season in 1:58.19, with Stepanek (2:00.49) posting the second-fastest time swimming exhibition.

Texas A&M freshman were a big part of the story on the men’s side, as first-years Trey Dickey and Tyler Hulet both roared to a pair of individual victories.

The standout for SMU was junior Colin Feehery, who picked up a pair of tight victories over Texas A&M senior Koko Bratanov.

Towards the end of the dual in the 200 IM, the two men locked horns again, as Bratanov opened up a big early lead before Feehery erased a 1.6-second deficit with a 30.99 breaststroke split. He then out-touched Bratanov, 1:49.54 to 1:49.70, for his second victory of the meet.