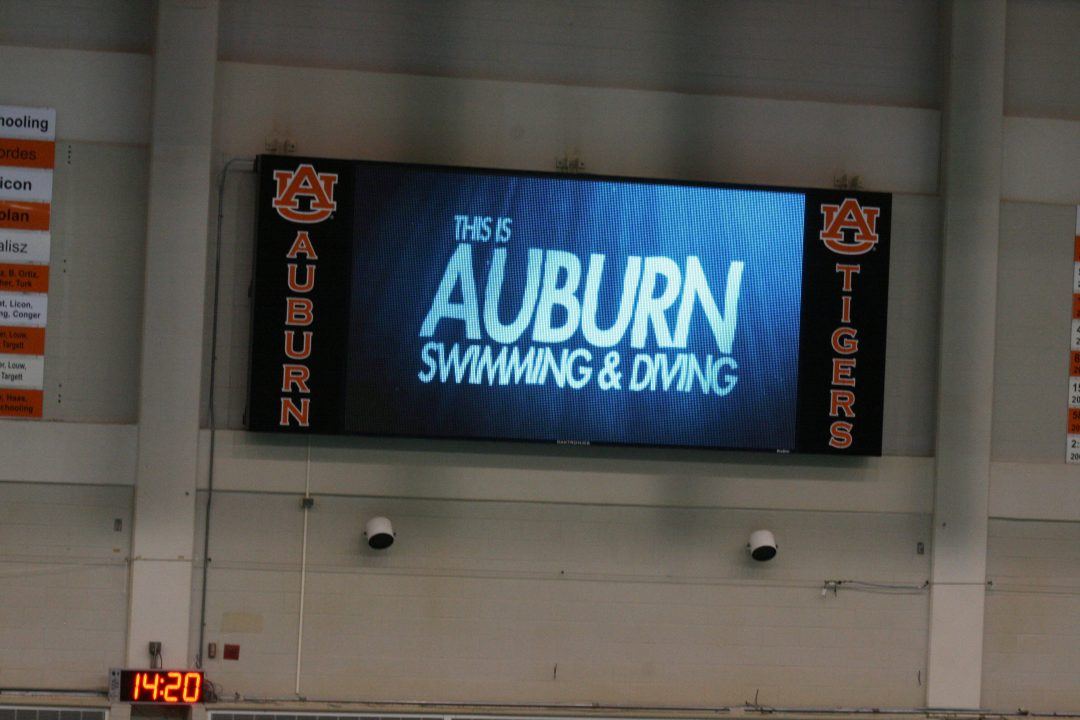 Aly Tetzloff had another impressive night for the Tigers. Current photo via Lauren Neidigh

The 2018 Auburn Invitation continued today in Alabama. Swimmers competed individually in the 400 IM, 100 fly, 200 free, 100 breast, and 100 back. Some teams also opted to participate in the 200 medley relay and 800 free relay to bookend the session. Read on for some highlights from tonight’s session.

Auburn freshman standout Hugo Gonzalez picked up a win in the 200 free. Gonzalez set the pace early on, leading in 46.36 at the halfway mark as Florida’s Gerry Quinn and Grady Heath trailed by just a few tenths. Gonzalez extended his lead through the back half, touching the wall over a second ahead of the field in 1:34.79. Heath came in 2nd with a 1:36.02 as he held off a late charge from teammate Dakota Mahaffey (1:36.06). Quinn wound up 4th, closely behind in 1:36.15.

Aly Tetzloff had another impressive night for the Tigers. She was dominant in the 100 fly, turning in 23.89 en route to a 51.79 victory. Teammate Ashton Ellzey gave the Tigers a 1-2 punch with her 53.89 for 2nd place. That swim for Tetzloff was a new lifetime best and her first swim under 52 seconds. Her former best, per the USA Swimming database, was a 52.38 from the 2016 SEC Championships. Tonight’s victory was Tetzloff’s 2nd win of the meet. She also won the 50 free last night in a personal best 22.08.

Also picking up their 2nd wins of the meet were Florida freshman Santiago Corredor and Auburn’s Zoe Thatcher. Corredor, who won last night’s 500 free, topped the 400 IM field tonight. Corredor broke 3:50 for the first time, dropping over 2 seconds as he touched in 3:48.53. Thatcher, who won the 200 IM last night, won the 200 free this time with a 1:47.49.

Why wouldn’t tetzloff be saving these efforts for SEC s?

At home in nice facility…she can/Will go faster…Go for it !

Why save when you know you can go fast?

With this logic, wouldn’t the entire Auburn swim team be going for it at home in a nice pool? Or all the invites home teams be going for it? Just unusual. I hope she does go faster at her conference meet and at NCAAs, but only time will tell.