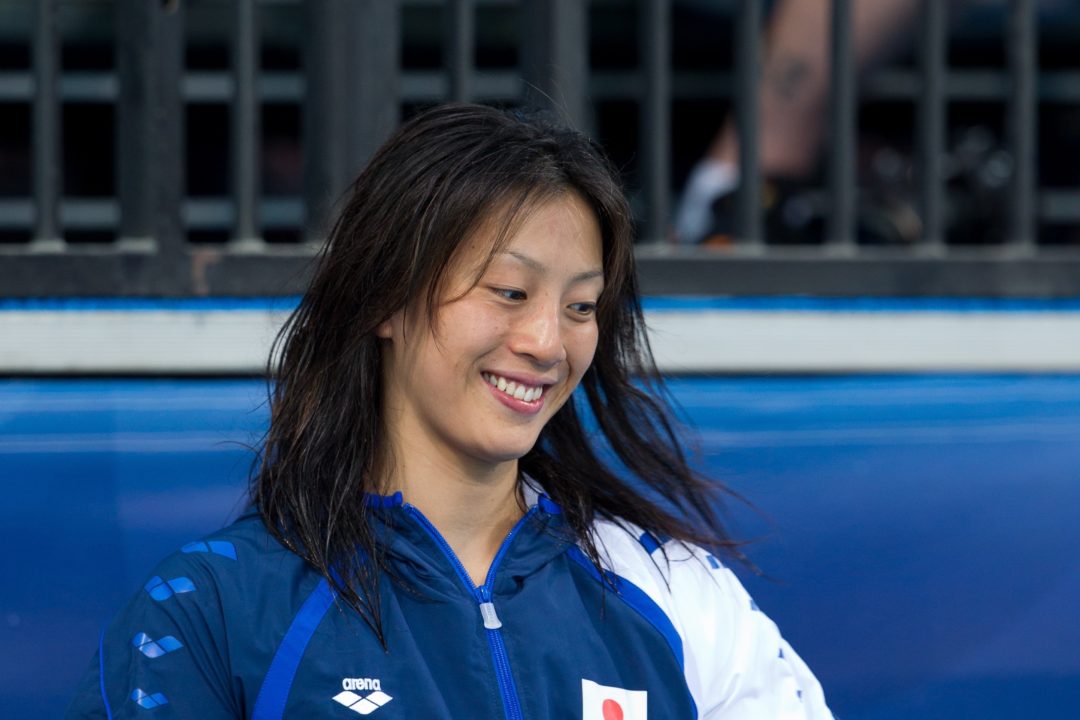 Day 2 of the 2012 Japan open rolled on Saturday with a lot of great swims; some from old standards of the Japanese team, and some from more recent revelations.

The second finals session started with the 400 IM’s, where 17-year old Miyu Ootsuka (4:37.36) won the women’s race in a time that was within a second of her winning time from Nationals in April. We’ve seen consistency from the Japanese all season in the short races (the 100’s); and even some of the strokes of 200’s. But never like this in the 400 IM.

In the men’s race, current World Leader Kosuke Hagino took the win in 4:13.13.

In the 50 butterflies, a National Record went down at the hands of Yuka Kato, with a 25.95. That won the race by over a second, but it only was only a slim .03 under her old Record. That swim is not a big surprise, though, after the 57.7 she put up at Nationals.

In the 200 backstrokes, two of the biggest stars of the country won in blazing times. First, Aya Terakawa, who broke the National Record in the 100 on Friday, won the 200 back in 2:07.84. That’s the 4th-best time in the world this year, after she didn’t swim this event at Trials. It will be interesting to see if the Japanese give her an opportunity to swim this race in London; if they do, she will be one of the few true medal contenders who isn’t just entering their primes – she’s almost 28.

In the men’s race, Ryosuke Irie took the win in 1:54.80. He, for sure, will swim this at the Olympics, and though it’s not his best time of the year, but it is the third different time this year that he’s been under 1:55 – and he’s the only one who’s done it in the world.

And wrapping the session, the Japanese women continue to look resurgent in what was previously their weakest event – the 100 free. Haruka Ueda won in 54.48, which was just off of her National Record from April. Just behind her in second was 15-year old Miki Uchida in 55.07, which is a new National Age Record in the race.

The Japanese have a ton of young talent, but until recently, it wasn’t in the freestyles. Now, with Ueda swimming so well, along with the other obvious pieces, they become bigtime candidates for the silver in the 400 medley relay (nobody is catching the Americans for gold).

I don’t think Japan become bigtime candidates for the silver in the women 400 medley relay.
I think Australia is still safe for silver, barring dsq.

I’m not even sure if Japan can overcome China for bronze.

Last year in Shanghai, Japan finished 5th with Terakawa, Suzuki, Kato and Matsumoto. and Matsumoto even split a decent 53.97