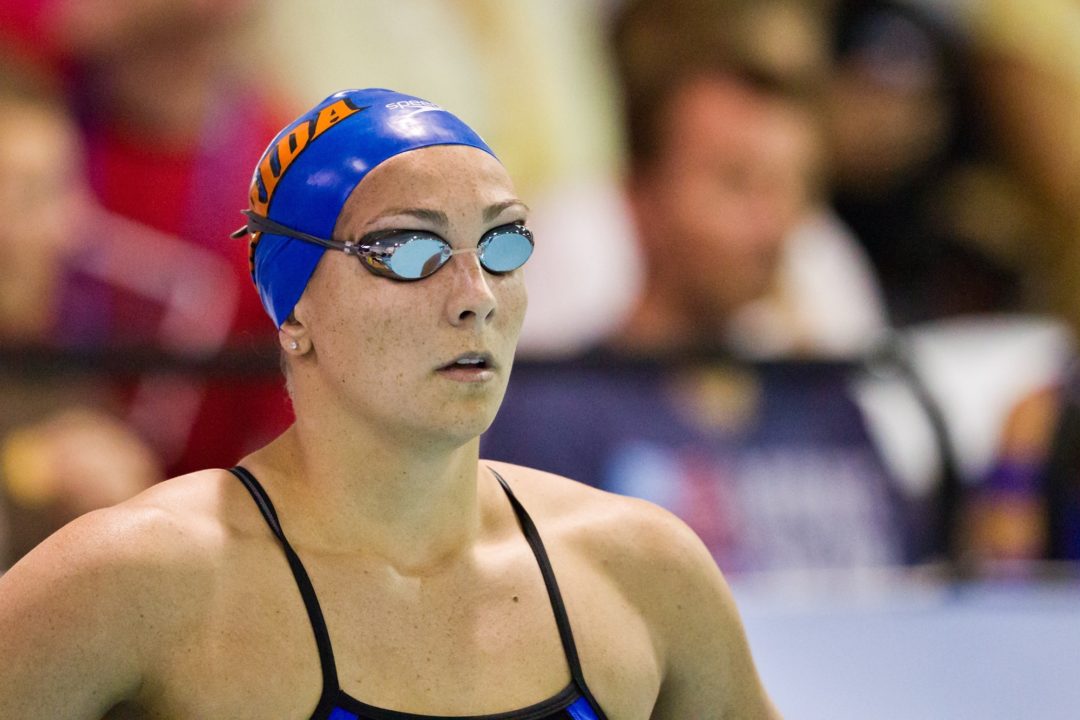 Florida Gator Sarah Bateman had one of the more exciting swims of day 6, even though it wasn't in a final.

2021 marks the first time that Russia (including the Soviet Union) has hosted a European Championship event in swimming. Above, Kliment Kolesnikov won 6 gold medals at the last edition in 2019.

Simona Quadarella (above) won 3 individual gold medals at the 2018 European Aquatics Championships. She’ll have to wait until 2021 to defend.

Matthew Richards of Great Britain won the men’s 100 free at last year’s European Junior Championships and was targeting a spot on the Olympic Team in 2020.

LEN, the governing body for aquatic sports including swimming in Europe, has announced that all sports and non-sports events scheduled…

The Duna Arena in Budapest was scheduled to host 3 disciplines at the 2020 European Aquatics Championships. The event has been delayed due to the coronavirus pandemic.

The 6th, and second-to-last, day of the 2012 European Championships

At the outset of this non-Olympic distance race for the women, the race was fairly tight, but by the 800 mark, two had separated themselves from the pack – Spain’s Mireia Belmonte leading the way, and Hungary’s Eva Risztov riding her hip.

The two stayed in about that position for roughly 300 or 400 meters. At that point, both swimmers pulled off of their pace a bit, but it was the Spaniard Belmonte (who didn’t compete in the 800) who held it the best. She started extending her lead by about half-a-second on each length, and when Risztov got back by her feet, there was no catching the Spaniard. Belmonte really made her point on the final 50, with a closing split of 30.79 – a full second faster than anyone in the field – to take a runaway victory in 16:05.34. That’s the best time in the world this year by four seconds.

That’s impressive pacing for a swimmer who has surprisingly only swum this race a very small handful of times in long course in her adult career (only at one other meet that I can find). That’s a surprising fact for a swimmer who typically takes on whatever brutal racing that she can. Needless to say, this was a best time for her.

Risztov touched 2nd in 16:10.04 – now the third-best time in the world this year, and her second distance medal of the meet. Risztov has always swum well in this Debrecen pool of her home country.

Spain put a second swimmer on the podium with Erica Villaecija finishing 3rd in 16:15.85.

Romania’s Camelia Potec, who is a former World Championship bronze medalist in this race.

For the first time of this meet, Hungary’s Laszlo Cseh was picked off in an event final, thanks to a new Championship Record of 51.45 from Serbia’s Milorad Cavic. That put him ahead of a lifetime-best of 51.77 from Cseh, and atoned for failing to even medal in the 50.

After almost dropping off the map for a few years after his epic battles in this race with Michael Phelps, Cavic looks like he’s back and almost as good as ever. He’s now training at Phelps’ old stomping ground with Club Wolverine, and whatever they’re doing with him certainly seems to be working. The great thing about that program up there is that they love swimming – so renewing the spirits and enthusiasm of a once-great swimmer would fit right into what they do.

For Cseh, this is a third individual medal and his first that isn’t gold. This wasn’t an event he would be swimming in London anyway more-than-likely, but his ability to swim so fast in this shorter 100 is a great sign of his strength in this Olympic cycle. He’ll regroup for Sunday looking for his third gold in the 400 IM, where he will be a heavy favorite.

The bronze went to Italy’s Matteo Rivolta in 52.40, which makes him the third-fastest Italian ever.

In 4th was Serbia’s forgotten understudy, Ivan Lendjer. Like his countrymate Cavic he takes his swim out very hard, and he ended up finishing 4th in 52.54.

Spain’s Rafa Munoz came up just short of a FINA Automatic qualifying time. After looking on-pace to crack it in the prelims and semis, he ran out of steam in this final for 5th in 52.71.

Federica Pellegrini’s win in the women’s 200 IM (1;56.76) wasn’t a mind-blowing time, especially compared to what we saw from her in the relay earlier in the meet. But it was a classic Federica swim, and that’s what’s important at this stage of the game. At the first turn she was only in 4th and a full second behind Germany’s Silke Lippok. By the halfway mark, she had moved into 2nd, but it was still a sizable deficit. She made a bit of a move in the third-50, but still wasn’t close enough for any mere mortal to make up the gap. But Pellegrini is not a mere mortal – showing impressive fortitude not to panic, she had a final 50 split of 29.55 to win the race handily; that’s almost as good as she finished at Worlds.

Part of the thrilling comeback, though, is due to the way that Lippok fell apart on the final length. She was two seconds slower than the other contenders, but she did exactly what you’d have to do to beat the Italian – put enough distance between you and her, and hope you can hold on. Her finishing time of 1:58.13 was about half-a-second slower than she was at German Nationals last week.

The women’s 50 back final was extremely exciting, with the top four separated by only a tenth of a second. Spain’s Mercedes Peris, using a great start, got to the wall first in 28.25, which moves her into the top 10 in the world. That improves off of the bronze medal she won in 2010.

Italy’s Arianna Barbieri, who’s been having a spectacular meet, was 2nd in 25.31; again just missing an Italian Record in the race. She tied for the silver with Croatia’s Sanja Jovanavic, which left the bronze vacated. Germany’s Jenny Mensing was just back in 4th in 28.36.

Radoslaw Kawecki, despite looking off-his-game the last few weeks in the 100 back, is still outstanding in the 200. He took the men’s 200 back title in 1:55.28 – a new Championship and Polish Record in the event. It’s going to sound funny for those who have followed polish swimming for a long time, but with that time ranked 2nd-in-the-world this year, they have a legitimate backstroke medal threat. Before Kawecki, Polish backstroking was not very good, and so for him in such a short time to have moved this far up in the world rankings says a lot about the development of the sport in that country. The Polish men haven’t won an Olympic medal since 1992, so that would make a Kawecki medal even more shocking.

Hungary’s Peter Bernek also broke his country’s National Record with a 1:55.88. That’s his best time by over a second, and blew away Laszlo Cseh’s National Record (Cseh, now a butterflier, was an outstanding backstroker as a junior swimmer). In third, completing two different trends, Israel’s Yakov Toumarkin broke the National Record for a bronze with a 1:57.35. That makes a clean sweep of the Israeli National backstroking records at this meet, and was their fourth medal in the discipline.

Among other notable finishes, France’s Benjamin Stasiulis took 7th in 1:58.55.

With his suit this time in tact (it ripped in the 100), Slovenia’s Damir Dugnojic took a big win in the men’s 50 breaststroke (his best event) in 27.32. With him standing so tall (around 6’7), it’s hard for his competitors to catch him in such a short distance. Italy’s Fabio Scozzoli, the defending European Champion, finished 2nd in 27.49. If anyone was going to catch Dugonjic, it would be Scozzoli – he’s the 2011 World Champion in the race, and the Italians are swimming very well.

Norway’s Aleksander Hetland wasn’t able to ride the momentum his country built on Friday to a medal, finishing 7th in 27.82. Still, at this meet he did go for a best time.

Germany, thanks to a 1:46.70 leadoff from Paul Biedermann, dominated the 800 free relay by four seconds to take the gold medal. For decades, the German men were the dominant team in this relay in Europe, but they haven’t won it now since 1999. Without a full Russian relay, though, there was nobody who had anywhere near the depth to make up for that Biedermann first leg – which matched his swim in the individual race.

Belgium in 4th swam a 7:15.58, including a 1:46.90 anchor from their star Pieter Timmers. That’s the best time for them in the Olympic qualifying period, and puts them safely in as well.

Austria (4th in 7:19.32) will sit 6th in the battle for the final Olympic invitational spots. We already know that Canada will be declining their bid, which leaves Austria one more scratch away from the Olympics in this relay.

Thanks for the great coverage of the European Championships!It has been a very exciting meet with so many great swims.Debrecen has done a fantastic job with the meet, especially when you consider they pulled all this together in less than 3 months.The webcast is amazing with so many different shots,at the blocks, underwater,overhead, at the turn, you almost feel as if you are there.Crowds have been great and the swimming surprisingly fast considering where some of these swimmers are in their training.Great picture of Sarah Bateman!Go Gators!
Wish I could have seen the swim off, sounds like it was quite a race.SWIMSWAM seems to be everywhere, I swear we spotted a SWIMSWAM shirt in the crowd!Keep up the great work!

It seems Belmonte will swim the 800 in London after all.

Also, it is nice to see Cavic back to his best. It will not change the gold medal outcome but it will provide much more interesting challenge