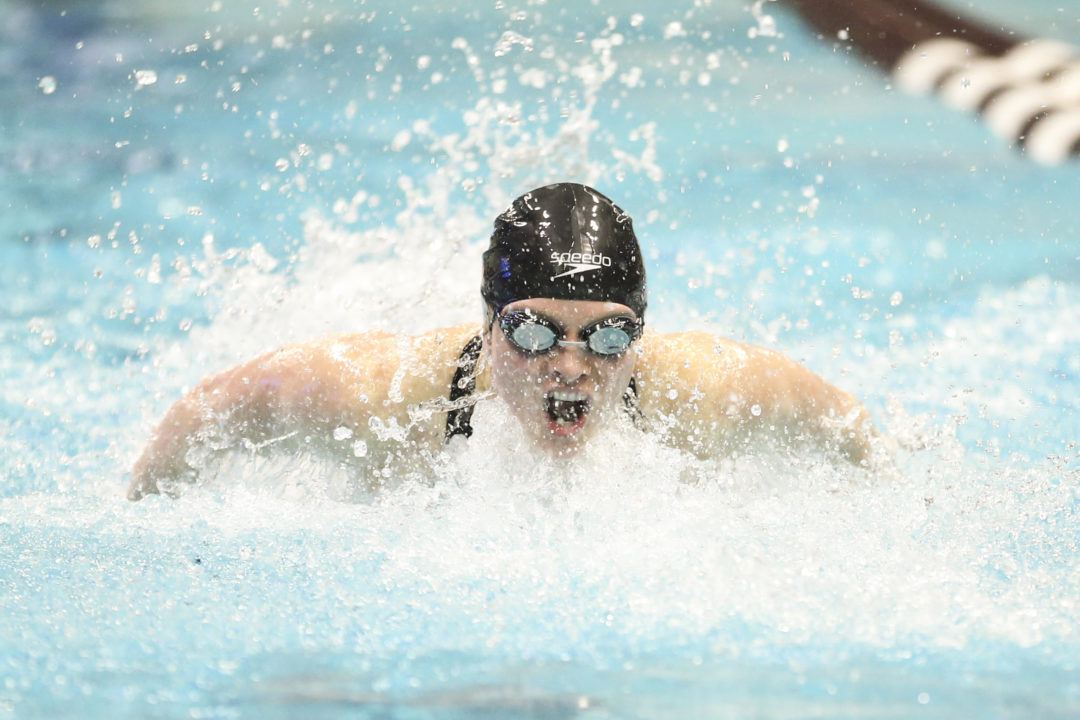 The Tennessee Volunteers, ranked 6th in our December power rankings, took down the #14 Georgia Bulldogs in a meet that saw both squads play to their strengths.

Madeline Banic and Bailey Grinter split 23.91 and 22.39 on the fly and free legs of Tennessee’s medley relay, as the Vols’ A team touched almost a second and a half ahead of Georgia’s squad, winning in 1:39.11

Tennessee elected to leave sprint star Erika Brown off that relay, and she responded by winning all three of her individual events, going 21.87/49.05 in the sprint freestyles, and 52.22 in the 100 fly, plus she led off Tennessee’s 400 free relay in 48.32.

The Volunteers opened things up with a 1:26.52 victory in the 200 medley relay. Recent addition Michael Houlie continues to look like he’ll be an instant-impact swimmer for Tennessee, as he split 23.83 on the breaststroke leg. Houlie would go on to get a 53.11 victory in the 100 breast.

KNOXVILLE, Tenn. — The Georgia swimming and diving teams were swept by Tennessee in the final Southeastern Conference dual meet of the year on Saturday at the Allan Jones Aquatic Center.

“We knew coming in here that Tennessee is always good this time of year,” Senior Associate Head Coach Harvey Humphries said. “They have a great coaching staff and they are swimming well. It was a great meet for us to be going to and racing at. The one thing I can say about our group is that every time they go up against a really good team, they never back down. They raced well. This is going to serve us well going into the end of the year.”

Danielle Della Torre claimed victory in the 100 breaststroke with a time of 1:01.69. Dakota Luther took first in the 200 butterfly, stopping the clock in 1:56.38. McKensi Austin won the 3-meter springboard with 313.13 points.

Camden Murphy and Andrew Abruzzo each won two events to pace the Bulldogs.

Georgia will return to Athens for the regular-season finale and Senior Day meet with Emory on Saturday, Feb. 2. Georgia will be hosting the SEC Championships Feb. 19-23 at Gabrielsen Natatorium.

KNOXVILLE, Tenn. – The Tennessee swimming and diving team recorded 19 wins out of 32 events Saturday to win the men’s and women’s competitions on senior day against Georgia at Allan Jones Aquatic Center.

The 13th-ranked Lady Vols finished out the afternoon with 170 points, as No. 12 Georgia fell with 130 points. No. 9 ranked Tennessee rounded out the meet with 156 points, with the 12th-ranked Bulldogs trailing with 144 points.

The Vols men got off to a hot start, with sophomore Will Hallam logging a win in 1-meter diving (309.23) and a team win in the 200 medley relay (1:26.52). The Tennessee men won five of their first eight events, as Michael Houlie registered the ninth-fastest 100 breaststroke time in Vols history (53.11).

DIVING SWEEP: Hallam swept diving for the men with wins in the 1-meter and 3-meter (361.65), as the group of Nick Rusek, Keegan Richardsonand Hallam finished 1-2-3 in both events.

The Lady Vols kicked off the morning with a personal season-best 1-meter performance from Ana Celaya Hernandez (271.80). The Tennessee women then followed up with a 1-2 finish in the 200 medley relay, with the group of Small, Popov, Banic and Grinter leading the pack for a winning time of 1:39.11. After dropping back-to-back races, junior Stanzi Moseley notched a crucial win for Tennessee in the 100 back (53.97) to swing the momentum. Meghan Small capped off the Lady Vols solo events with a win in the 200 individual medley (1:58.71).

FINISHING STRONG: Both the men and women rounded out the day with team victories in the final event of the meet, the 400 free relay. The Vols finished with a 2:56.25 time, while the Lady Vols notched a time of 3:18.31.

UP NEXT: The Tennessee swimming and diving team hit the road to Gainesville next Saturday, Feb. 2 to take on the Florida Gators. This will be the Vols final meet of the spring season, as the SEC Championships begin on Feb. 19 in Athens, Ga.

QUOTES:
Dave Parrington, Diving Coach
“From the diving end of things, I was pretty pleased. We went in with our top two men divers and our top Lady Vol diver not able to go for different reasons. That was on some of the younger guys to get the job done, particularly on the men’s side in what is an incredible rivalry. At the time it was a close event, and they went 1-2-3 on both boards. Those were really crucial points to the meet, so kudos to the guys who stepped up and got it done. I was really proud of them, and Will Hallam getting two victories today, the first two wins of his career, really well done. The other guys also did some really good stuff. On the women’s side, we had a fantastic win on the 1-meter but came up a little shy on the 3-meter. I was very pleased with their performance, and Lily Schneider is continuing to show improvement. This was a really big step in our preparations for the SEC Championships and the NCAA zones after that. I am happy to see how it went today.”

Ashley Jahn, Associate Head Coach (Women)
“I thought the meet was great today, both teams competed really well and both our Vols and Lady Vols competed really well. Georgia is a really tough team, they are always really competitive. That is why I love swimming them at this time of the year. It was just a great competition and we were led by a great group of seniors. It was a really good meet today. The seniors felt a little bit of extra excitement because it is their last dual meet contribution of the year. It is a great rivalry with Georgia, so they wanted to compete really well. In terms of the Lady Vols, we have not beaten Georgia many times, so it was a great competition.”

Lance Asti, Associate Head Coach (Men)
“We competed really well, and Georgia threw everything they had at us, but our guys responded really well under the leadership of our seniors and captains. I am really proud of their performance and the way they competed. We had a challenge with from our alumni this week about the mentality that we bring to every meet, especially this one. The idea that we expect to win, and our guys definitely competed as though they expected to win this meet with fire and the way they finished the races. I am proud of them and their senior leadership. We went after this meet and everyone tried to give their very best performance and a thank you performance to the seniors. We talked about digging a little bit deeper to honor the guys that have given four years of sacrifice. You could see it in the way we competed today.”

The women might. Who knows? TAMU and Georgia women are having a bit of an off year and while the Florida has improved a ton, they aren’t quite at the top of the conference yet. Kentucky will be great but doesn’t have the depth of the top teams and is a little thinner in the sprint events. Most of the other teams have a few studs to get in the mix too. It could be a really fun meet on the women’s side!

Tennessee’s divers have to be the differential. The swimming competition was very close. Diving scores were not close at all. Like Texas’ last two National Championships, the divers were huge contributors to those wins. I have always had mixed feelings about diving programs blended into the swimming competition. Divers are in incredibly short supply as are diving coaches. Many institutions by virtue of geographic proximity, have a difficult time participating in all three NCAA divisions that includes diving in the scoring. There is an asymmetry with regards to recruiting for diving. Another issue is that some institutions feel the diving boards/platfoms are a major liability and have removed them from the natatoriums entirely. It is January. It is somewhat difficult… Read more »

The diving scores for the women were Georgia 22, Tennessee 16. Georgia’s divers helped make their swimming defeat look closer than it was.

So the big dual meet season is almost over. I don’t think the SEC is super strong this year. Maybe no top 5 teams at NCAAs either on the men or women’s side? So name your team winner for men and women at SEC! Don’t name more than one per side!
I will go first with my guess: men-Florida. Women-Tenn
I do think it won’t be a runaway for whoever wins. Maybe any of 5 schools could win the men and women! It should be exciting team race!

Well I WOULD agree with you on the Men except the Manly Diving Vols just aint got competition! So I give the slight nod to the Mans Vols, followed by A+M then UF. then who knows or cares. The SEC in men this year is pitiful with likely only 1 team in the top 10 if UT divers do what they gettin paid for. First time in decades the SEC with no top 5 or multiple teams in the top ten..sad, sad, sad! Them coaches need ta get recruitin and back ta working…enuf playing games. On the girlie side..it is the Girl Vols all the way followed closely by A+M, then UK, then UF, then UGA. I know the Girl… Read more »

Looks like Tennessee might have the best chance of winning on the women’s side… on the men’s side my prediction is that UF, UGA, and UT will be a super super close contest the whole meet. Realistically there’s a good chance it could go to any of those three, but being a Tennessee fan, I gotta go with the Vols to take home the title.

I was about to call a Tennessee shocker on the men’s side. They’re going to rack up diving points real quick.

Missouri probably has the best men’s swim team in the conference, but their diving isn’t what it used to be, and their history is not to go after SECs (we’ll see what Andy Grevers might do about that).

A&M men are a sleeper. They’re a super young team, but they’ve got the divers to compete as well.

I think Superfan is right – on the men’s side, it’s a true 5 team race.