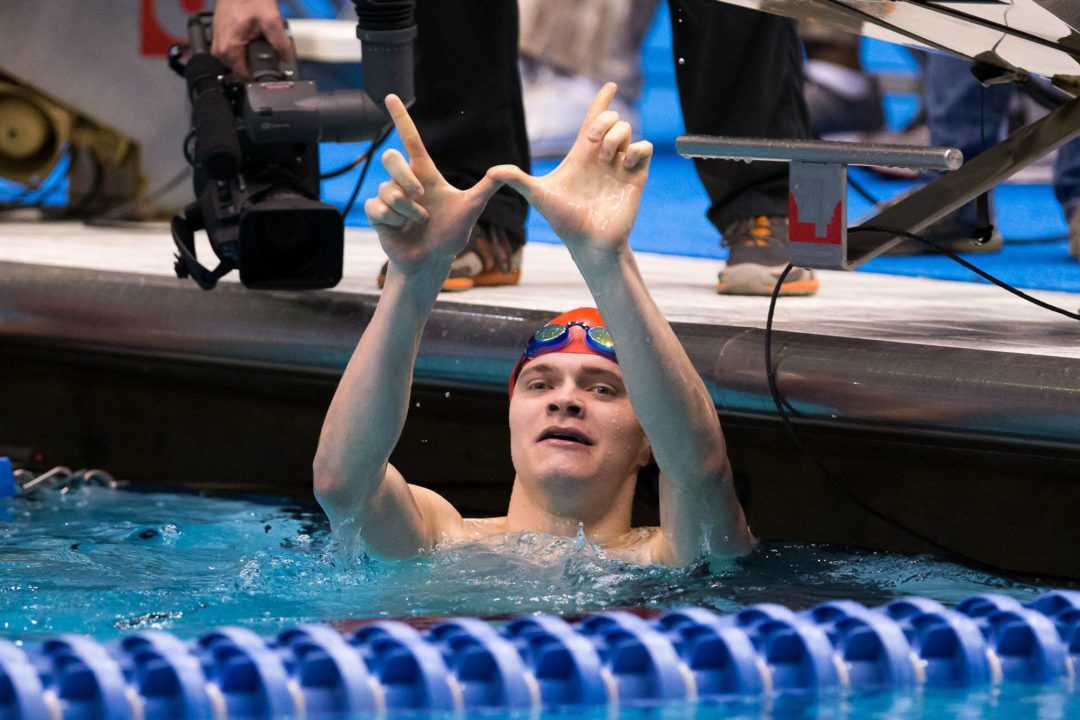 Wisconsin's Drew Teduits, the NCAA Champion in the 200 backstroke, swam a lifetime best in long course of the same event on Sunday morning. (Photo: Tim Binning/TheSwimPictures.com)

The last prelims session at the 2013 Charlotte UltraSwim Grand Prix saw full fields continuing to compete, whereas competition can sometimes wane on the travel days of these meets.

In the women’s 200 IM, the first event of the session, SwimMAC 16-year old Kathleen Baker took the top seed in 2:16.95. After racing notably well, for her, with a lifetime best in the 100 breaststroke earlier in the meet, it’s no surprise that she’s put things together for this lifetime best swim in the medley.

Annie Zhu and Katie Meili also snuck into that A-Final, while swimmers like Cammile Adams and Elizabeth Beisel are sitting in the B instead. Beisel looked solid in her 400 IM, but hasn’t quite mustered up the speed in these shorter events.

In the men’s 200 IM, Chase Kalisz took top honors handily in 2:02.18. He won the 400 IM running away earlier in the meet, but should expect better competition in finals from Bolles’ Joseph Schooling, representing Singapore, who is on-fire this weekend. Schooling was the 2nd seed in 2:03.26.

Ryan Lochte will be in lane 3 for the final with a 2:03.74, and UMBC’s Mohamed Hussein, who earlier this year became the first swimmer from their men’s team to ever qualify for NCAA’s, sits 4th in 2:03.85. That’s within a second of his Egyptian National Record.

This is a very good final, with Kyle Whitaker, 16-year old star Andrew Seliskar, Conor Dwyer, and Sebastien Rousseau all in the top 8. That’s three swimmers from the Gator training group in Gainesville. The B-Final of this race will have some star power as well.

This morning’s 200 backstrokes were highlighted by the big number of young athletes near the top of the podium. On the women’s side, the four of the top five seeds headed into tonight are high schoolers. 17-year-old Brooke Zeiger of Bluefish Swim Club took the top spot, touching in 2:14.54, followed closely by 18-year-old Annie Harrison (2:14.93) and 15-year-old Kaitlin Harty (2:15.49).  The favorite tonight, however, has to be Olympic medalist and 4th overall seed Elizabeth Beisel. She is tied with another young gun, Vien Nguyen, at 2:15.87.
The top seed in the men’s race is NCAA champion Drew teDuits of Wisconsin (1:59.59).  The backstroke specialist, who is a Madison local from Edgewood High, had a breakthrough short course season, and with a best time this morning, he’s showing he can contend long course, too. That swim is a lifetime best for him – thought not by much, remember that it’s early May.
Although TeDuits has a massive lead on the field headed into tonight, he is scratching finals. This could still be an interesting top 8 though, depending on who else comes back. 2008 Olympic gold medalist Ryan Lochte is in the second spot (2:02.01), and teenage phenoms Ryan Murphy (2:02.28) and Jack Conger (2:02.74) are fourth and sixth, respectively.
The final events of the morning session, the men’s and women’s 100 freestyles, were controlled by veterans and familiar faces. Dana Vollmer continued her solid weekend, touching first in 55.69.  Although she missed the Olympic team in the 400 freestyle relay, Vollmer has been a great contributor for the U.S. women internationally on relays for a number of years.  Shannon Vreeland (55.78), Jessica Hardy (55.86), and Megan Romano (55.96) also cracked 56 seconds.
Marcelo Chierighini, fresh off a great performance at the Maria Lenk meets in Brazil, continued his strong long course season this morning, touching in 49.62.  Ricky Berens (49.76) and Adam Brown (49.95) were the only other swimmers under 50 seconds.  Don’t sleep on the rest of the heat, though; Olympians Garrett Weber-Gale (50.49) and Anthony Ervin (50.75) were fifth and seventh, respectively. Ervin won a loaded heat ahead of names like Cullen Jones and Darian Townsend, but he was the only one from that final heat to make this A-Final.
Full, live meet results available here.

TeDuits was only swimming prelims today, so Lochte will go in as top seed tonight.

Chierighini will not swim finals too If I am correct..

Drew teDuits put it out there this morning cause he isn’t swimming finals. he has to go back to Wisc and take his finals!

Where are Tyler Clary and Olivia Smoliga? We have never seen him this weekend while he was in the psych sheet and we have seen her only on the first day! I hope they haven’t been kidnaped!