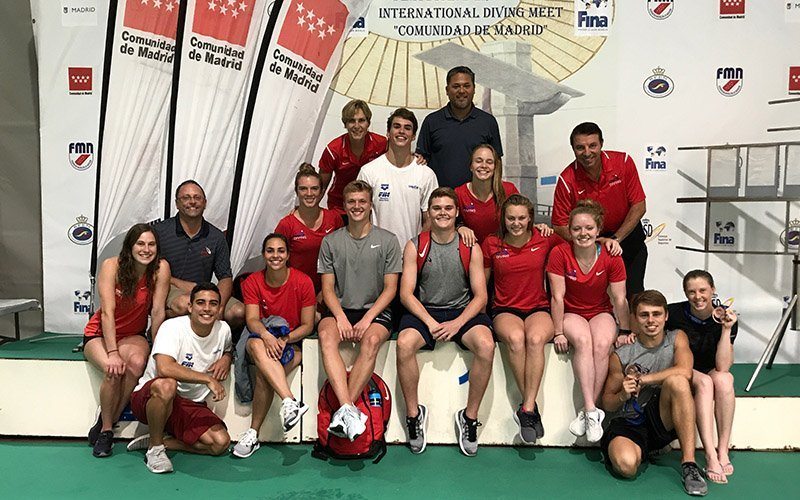 Led by a gold from Murphy Bromberg, Team USA won five medals on the final day of competition at the FINA Grand Prix in Madrid. Bromberg finished first in the women’s 10-meter contest, with Amy Cozad Magana clinching bronze in the same event. Current photo via USA Diving

All-state diver Alexa Walkovich has committed to dive at the University of Cincinnati in her home state of Ohio.

Bromberg scored 362.10 points to takehome the gold in the women’s 10-meter contest, while Magaña placed third with 311.40 points. Team USA began competition strong with Bromberg and Magaña placing first and third after scoring 73.60 points and 62.40 points in the first round. In the second round Bromberg slipped to second behind China’s Jiao Jingjing after her front 3 ½ pike scored 64.50 points. Magaña dove a back armstand with 2 somersaults and 1 ½ twists for 64.00 points in the second round to hold her spot at third. Bromberg regained her spot at first in the following round after a back 3 ½ tuck  scored 79.20 points, while Magaña held her spot at third despite a back 3 ½ tuck only scoring 56.10 points. Bromberg and Magaña maintained their spots for the remainder of finals, with Magaña performing a front 3 ½ pike for 66.00 points in the final round, her strongest dive of the day. Jiao finished second with 325.90 points.

Campbell and Duncan scored 387.75 points to place third in Sunday’s 3-meter synchro finals after starting competition at sixth place. In the second round, the pair shared fifth place with Russia’s Ilia Molchanov and Nikita Nikolaev after performing a reverse ½ pike for 48.00 points, before slipping back down to sixth after Russia led the pair by 7.89 points in the following round. The duo held sixth place in the fourth round with an inward 2 ½ pike for 65.70 points. Being in sixth place with two rounds to go, the pair proved to be resilient. With a total of 222.21 points, the pair completed a reverse 1 ½ somersaults with 3 ½ twists for 81.90 points to jump up to third place. The pair held their spot in the final round after a front 2 ½ somersaults with 2 twists scored 83.64 points. China’s Liu Chengming and Peng Jianfeng led Campbell and Duncan by 3.63 points for the silver medal and Mexico’s Juan Calaya and Yahel Castillo scored 405.15 points for first place.

In the men’s 10-meter platform synchro, Cooper and Cornish scored 308.94 points to secure the bronze medal. The pair began the finals at third place after diving a front 1 ½ pike for 46.20 points. They held the third place spot for the rest of competition where they had a strong inward 3 ½ tuck for 62.40 points in the third round and a successful front 3 ½ pike for 63.00 points in the final round. Russia’s Gleb Kasinoav and Artem Trubin placed second with 353.52 points, while China’s Huang Bowen and Tai Xiaohu won the gold medal with 427.92 points.

Gibson and Palmer wrapped up competition for Team USA by scoring 271.89 points for the bronze medal in women’s 3-meter synchro. The pair began the first two rounds of the women’s 3-meter synchro finals at second place with an inward ½ pike and a back ½ pike for 49.80 and 44.40 points. The American teammates slipped to third in the third round after a front 2 ½ somersaults with 1 twist only scored 58.50 points. In the fourth round the duo dove a front 3 ½ pike for 67.89 points, their highest score of the day, allowing Gibson and Palmer to hold on to their spot at third. They finished competition with a reverse 2 ½ pike for 51.30 points, while Holland’s Inge Jansen and Celine Van Duijn finished 3.24 points ahead of Gibson and Palmer to clinch the silver medal. China’s Wu Chunting and Chen Yiwen captured the gold medal with 310.86 points.

“We couldn’t be more proud of our USA divers,” coach Abel Sanchez said after competition concluded. “They were strong, confident and consistent. They not only took the pressure, they added pressure to the whole field.”

“(It was) a great fight to the end. We love our team,” Sanchez said. “We’re happy for an amazing two weeks and now sad it’s over. Thank you to all the coaches that entrusted their athletes to us. Thank you to all the athletes for believing in us and trusting us with their dives. We will always remember our time in Bolzano and Madrid.”