“Team Thunderdome” Wins The 56th Around The Island® Swim 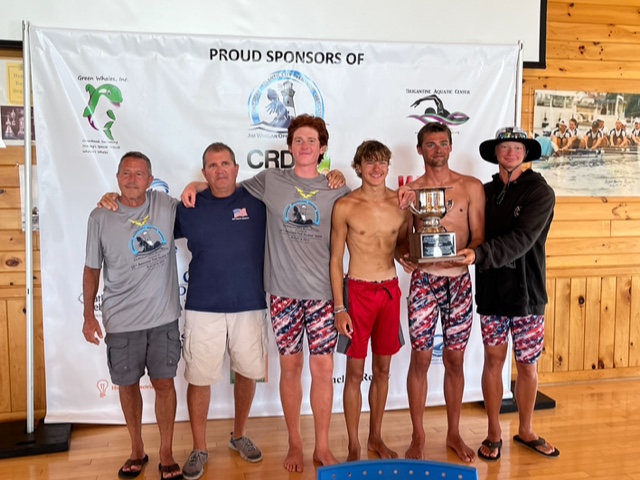 “Team Thunderdome” completed the 22.75mi (36.6km) course around Absecon Island, and the cities of Atlantic City, Ventnor, Margate, and Longport, in 8:02:51. Current photo via Sari Carroll

ATLANTIC CITY, NJ – A team made up of local high school swimmers and beach patrol members took first place in the 56th Around The Island® Swim, part of the 3rd Annual Jim Whelan Open Water Festival.

Coming in about six minutes behind them was the Tortuga Golden Striders, a relay team made up of Masters swimmers Rob Montgomery, Bobby Pugh, Daniel Killinger, and Frank Geraci. Their time was 8:08:49. Times were confirmed and recorded by Jeff Chu, an Open Water Referee with USA Swimming. Two individual athletes, John Zeigler and Robert Gatto did not finish the race; they exited the water on their own.

The swim kicked off just before 8am at the Atlantic City High School Boathouse by official Starter, Mrs. Constance Days-Chapman, ACHS Principal. Swimming clockwise around the island, both teams were never more than a few yards apart until after rounding the Longport Jetty when Team Thunderdome pulled out in front. At times, the swimmers were close enough to give each other high-fives and exchange words of encouragement.

“I am just amazed at how these two relay teams performed during this race,” says Assistant Race Director Sari Carroll. “It was a battle of youth versus experience. I had no clue how it would play out. But one thing I was sure of was no matter who won, this would certainly be one to remember.”

The winning relay team was presented with the Solitare Cup, named in honor of Edward Solitare, the first person to complete the Around The Island® Swim back in 1953. This new award unique to relay teams celebrates teamwork & friendship while honoring the important significance of this marathon swim to the Absecon Island community.

ABOUT THE Around the Island® Swim

The Around the Island® Swim is a 22.75mi (36.6km) open water marathon swim that circumnavigates Absecon Island in southern New Jersey. The legendary swim, which started as a $100 bet back in 1953 between two beach patrol members, became one of the premier open water events in the world. After a hiatus, the race was resurrected in 2019 as part of the Jim Whelan Open Water Festival, named after the late Atlantic City Mayor, NJ State Senator, and advocate of swimming and water safety education. All proceeds from the festival benefit Green Whales, Inc. a NJ non-profit supporting various children’s swim programs in Atlantic County, NJ. Visit www.jwopenwater.org for more information.