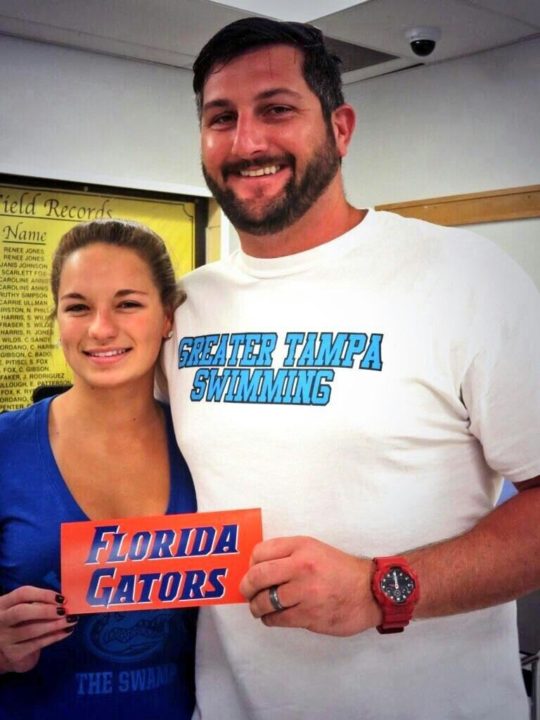 Ally Donahue, left, graduated high school a year early and will enroll at the University of Florida. Current photo via Jimi Kiner

The Florida Gators’ biggest need for next fall is a breaststroker, as their best by far in that stroke, All-American Hilda Luthersdottir, is graduating.

Head coach Gregg Troy did a little bit of work on that with the signing of a 1:05.0 100 yard breaststroker in the fall class, Paige Sheriger, but overall, it’s a glaring hole in their line-up.

Their first signee of the spring semester, though, is a really interesting story and a very good grab for them. Ally Donahue from Greater Tampa Swimming signed on Thursday to become a Gator. She is the defending Florida High School State Champion in both  the 100 breaststroke and the 50 free for 4A (the biggest schools). Her yards best times are 23.60 in the 50 free and 1:01.97 in the 100 breast.

Typically, swimmers of that caliber don’t have to wait until the spring to sign, however Donahue is leaving Plant High School after her junior year. She finished high school a year early and has opted to head to Florida to get a jump on her college career. She ultimately won’t be all that young compared to the freshman class, as she turns 18 in September, but she will still begin class at Florida as just a 17-year old.

Donahue is a swimmer who is on-the-rise. In just the fall of her junior season (she hasn’t rested in the spring yet), Donahue dropped over a second in her 100 breaststroke and over six-tenths in her 50 free.

She trains at Greater Tamp Aquatics under Jimi Kiner and for Plant High School under Gil Gonzalez. In addition to her 50 freestyle and 100 breast, she also broke the Plant High School Record in the 200 IM in the 2013-2014 season in 2:06.48.

Wow – to finish high school a YEAR early AND turns 18 in September? Sounds like the age of most high school seniors. A lot of my kids senior classmates did not turn 18 until October, November and December of their first year of college and they graduated high school on time, not early.

Depends on where you are. Every state has its own rules.

Exactly. She, like anyone, could have started school in a state with a different cutoff for starting school. Or she could have attended an extra year of preschool. It doesn’t matter. Obviously she worked hard in high school to successfully complete a 4-year curriculum in 3 years. Great job!

If you can’t say anything nice, don’t say anything. This is a rude comment. Obviously she worked hard in high school to finish in 3 years and is fast enough to swim at UF. Congrats!

The state of Florida, like MOST ALL Southern state’s birthdate cutoff is Sept. 1st! Most kids in these states turn 5 before kindergarten, thus 18 BEFORE entering college.This talented, young lady was 16 BEFORE her Senior year. There are many Northern states whose cutoff isn’t until Dec. Based on these FACTS, she is competing against kids up to a year older than her. That’s impressive! Let’s be happy for one another & teach our kids the same!!!! Please check your
facts before you post.

Watched her swim at the CARIFTA Games over the years; A very lovely and talented young lady.

Kudos to her parents!

Right; it sounds like she either started school a year late as a youngster or lost a year somewhere along the way for whatever reason, and then eventually took enough credits to catch up with her same-age peers. A 1:01.9’s not bad and if she can improve will plug the gap a bit and keep the Gators in contention.

liquidassets – in most states, a September birthday puts you in the next class year. Florida has a September 1 cutoff.

Here’s an (unofficial) list that I found on the internet.

She didn’t start school late or lose any years. She just wanted to graduate early.

I went to public school and swam in florida k-12. I personally have known very very few people in who have graduated highschool and started college before they were 18. As Braden pointed out her birthday puts her just out of the cutoff and because of this she was just one of the older people in her grade. She still finished highschool early which takes hard work.