Szekely Comes Closer to Beard’s NAG Record Than Anyone in History at Jr. Nats 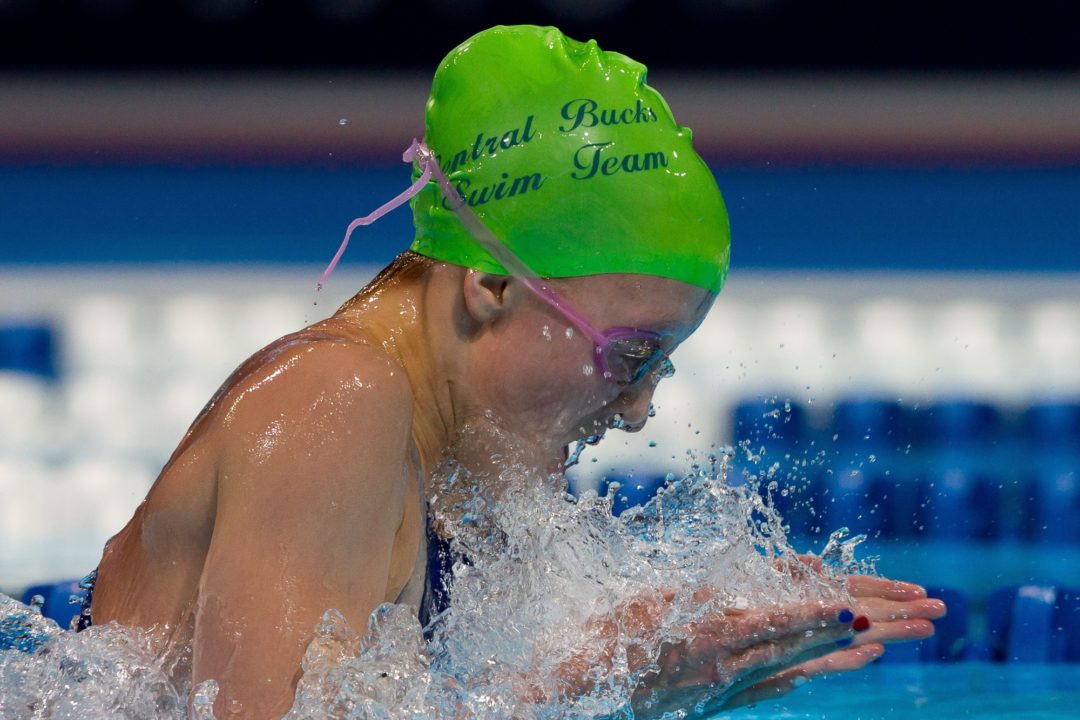 Allie Szekely was one of 3 Meet Record breakers in the first finals session of the 2012 Junior National Championships. (Photo Courtesy: ©Tim Binning/TheSwimPictures.com)

Night 1 of the 2012 Junior National Championships in Indianapolis was a stunner, as three Meet Records have gone down already. The results were exactly what you want to see out of a Junior National meet – a mix of established players on the youth scene and some new names who breakout to make podiums.

In prelims of the girls’ 200 fly, Michelle Cefal had a small, one-tenth of a second drop. Apparently not satisfied with that result, Cefal went out nearly a second faster in the first 100 meters and closed like a freight train to win the event in 2:10.35. That’s a full three-second drop for her in the meet. The Tualatin Hills 16-year old was short of her best time at the Olympic Trials, but has been better at each meet since then.

Madison Wright was the top seed coming in, and a half-second drop left her with a silver medal. She’s only 15, as is the third-place finisher Katie McLaughlin from Mission Viejo in 2:12.92.

Winning the B-Final, from Chattahoochee Gold in Georgia, Lauren Case swam a 2:13.53. She’s now the third-fastest 13-14 year old in the country this season (including behind the aforementioned Wright, prior to aging up).

Denver Swim Academy’s Clark Smith, headed into his senior year of high school, made a statement by charging the finals of this 200 fly, touching in 1:58.64 as the only swimmer under two minutes. He was out in a 55.8, and still had enough gas to come back in a 1:02.7. Smith, like her Regis Jesuit teammate Missy Franklin, is one of the top recruits in the class of 2013, and has strong ties to the Texas program. If he went that way, a butterflier would fill an area of need for Texas after the graduation of Neil Caskey and transfer of Woody Joye.

This is unbelievable. Stunning. Flabbergasting. Allie Szekely from the Central Bucks Swim Team in Pennsylvania has already set an unmatchable bar for the best swim in this meet. She won the girls’ 200 breaststroke in 2:26.35, breaking Emma Schoettmer’s Meet Record from last season by more than a second-and-a-half.

It’s stunning that this 14-year old was a 2:30 at the Olympic Trials, and wasn’t even close to her best. She was then a 2:29 at the Middle Atlantic Champs. And then here, she took more than three seconds off of that time. She didn’t change her pacing considerably from Omaha, but was just better on each part of this swim. Her closing 50 of 38.58, however, was extremely fast – that’s roughly as well as Amanda Beard or Caitlin Leverenz finish their 200’s. Szekely swims with a lot of hip action in her stroke which is where she generates her power from, and arguably that keeps her fresh at the end of her race.

Speaking of Beard, Szekely sits 2nd only to Beard’s Olympic performance from 1996 on the all-time age group list, and at only 6-tenths back is closer than it seemed like anybody would be able to get to a National Age Group Record in this race for quite some time.

Orinda Aquatics’ Steven Strumph took his first win of the meet with a 2:15.24. He took the race out very well – 1:04.99 – for the win. This is another case of a swimmer who went a great time at the Olympic Trials, but has come back two months later with more huge time drops – more than a full second.

The silver-medalist is a new name at this level – 17-year old Gage Crosby in 2:17.17. Year-over-year, that’s a two-second drop from the swim that placed him 9th at last year’s Junior Nationals.

The second Meet Record of the day went down at the hands of Gillian Ryan from North Baltimore. She still didn’t get a best time in this race, having yet been unable to match her swim from the great summer of 2011 that took the National Title. She was three-seconds off here in 8:30.84, but that time is still a nice punctuation for her summer. Looks for great swims in her 400 and 200 as well.

Mission Viejo’s Brooke Lorentzen, who has been great in open water, was 2nd in this 800 in 8:43.92. That’s a modest personal-best for the Junior National Teamer. Training at Mission Viejo, with many other great open water swimmers like Ashley Twichell, she could continue to be one of a breed of new generation of true-bred open water stars in the United States.

Another open water prodigy, Jordan Wilimovsky, broke a Meet Record in the men’s Olympic distance race. He put up a 15:23.01 to break the mark held by Will Freeman from 2009. He was followed by a group of very good young distance swimmers – including those known (David Heron in15:28.50; Janardan Burns in 15:30.40 for 4th) and those less-known (a 14-second drop from Cliff Goertemiller for 3rd in 15:30.39).

But even against that great field, Wilimovsky was able to pull away around the halfway mark. As his competitors held steady around 31.1’s and 31.2’s, Wilimovsky actually dropped into splits around 30.7 per 50. That will put a big gap on the field in a hurry.

I like that Allie doesn’t wear a “fast” suit, really shows that it’s about the swimmer and not the suit!

Why doesn’t she wear a modern suit? I hope somebody will buy her a fast suit in the years to come.

Looking more and more like the next great one. It would be interesting to see how her progressions in the 100 and 200 compare to those of Ruta Meilutyte in the last 12 to 24 months.

Thanks for the info. Much appreciated!