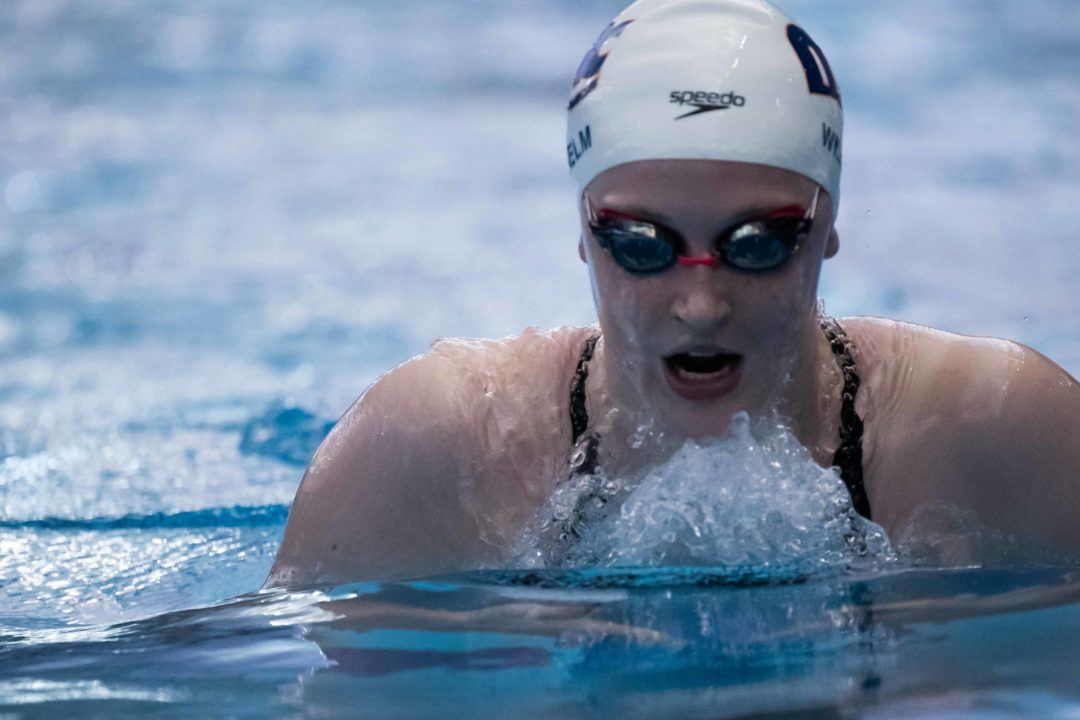 Kiley Wilhelm (above) and the SwimMAC Carolina 13-14 400 medley relay broke the National Age Group Record in the 400 medley relay: one of two teams to finish ahead of the old record in Saturday's final. Archive photo via Mike Lewis/Ola Vista Photography

It was going to take a monumental effort for anybody to derail the TAC Titans 13-14 girls and their National Age Group Record freight train this weekend at the North Carolina Age Group Swimming Championships. The group broke 2 relay national records and an individual national record through the first half of Saturday’s finals session, and looked lined up for another in the 400 medley relay.

The SwimMAC relay was made up of Morgan Razewski, Grace Rainey, Kiley Wilhelm, and Maya Gendzel, all 14-year olds. TAC’s 2nd-place relay of Abigail Clark, Keelan Cotter, Claire Curzan, and Taylor Morris were the same four swimmers as swam on the team’s other 2 record-setting relays.

Rob’s fantastic. Gotta wonder why you’re hearing more about him than about head coach Bruce though. What happens when they leave Rob’s group?

They get even faster. Three years ago the top group only had 2 JR. National Qualifiers. Winter Juniors the women finished third with all swimmers under coach Bruce except one.

I’m not trying to say Bruce is a bad coach by any stretch.

TAC is currently leading MAC at this meet by a good margin. They’ve beaten MAC at the Age Group Championships a number of times now in the past couple years. To me there’s no arguing that TAC is doing something at the 14-under level (especially as 13-14s) that sets them apart from MAC.

But at the 15-over level, I still think TAC has something to prove. MAC has been a perennial powerhouse team at both Winter Juniors (East) and Summer Juniors, always in the mix to win those meets. TAC sent most of their Summer Juniors qualifiers last season to the TAC-hosted Futures, where they got fourth… Read more »

I’m sure the TAC Coaches are fine coaches – I wonder how much of their rise has to do with the facility and whether or not that has helped then absorb/gain top swimming talent from the other programs in the Raleigh area… MOR, RSA, others.

I would also be curious to see the training differences between TAC and MAC. If TAC is having more success at 12&Under than 13+ at the State and National levels, then it’s certainly possible that TAC is training their younger swimmers at greater volume and intensity – including dryland – than MAC. And MAC may be more interested in long-term trajectory and performance when it really matters – Senior and Collegiate-level swimming – focusing more… Read more »

Definitely not the blocks. If you can hear them move on starts, they’re stealing momentum from the swimmers, and those blocks are loud.