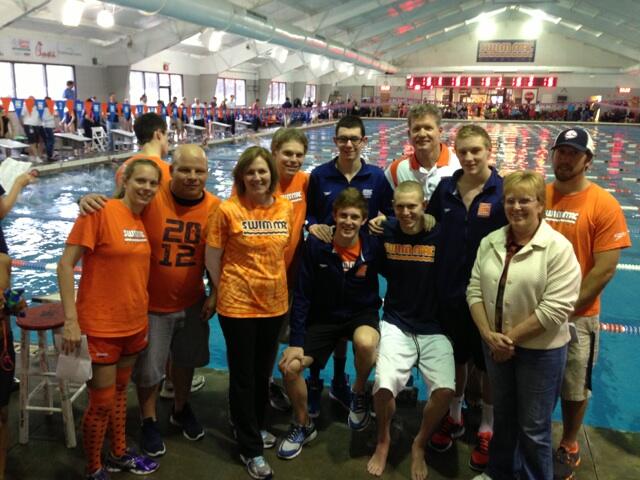 The 15-16 boys from SwimMAC Carolina who combined to break the NAG Record in the 200 free relay, along with the many coaches they have swum for in their careers. (Photo Thanks to: David Marsh)

Spurred on by the incredible two-year National Age Group Record run that their senior teammates have had, the SwimMAC 15-16’s on Sunday broke the 15-16 record in the 200 free relay on Sunday, also in a time trial at the team’s hosted Tar Heel State meet.

The old record of 1:24.88 was set by the Claremont Club in 2010, with team members Kevin Coan, Jason Haney, Kyle Coan, and Michael Haney: two sets of brothers.

The newest SwimMAC record setters have been pumped up about their record attempt all weekend, especially after they saw their 17-18 teammates, and training partners, on Saturday break the 800 free relay NAG Record: officially giving the current group at SwimMAC all of the 15-18 and 17-18 relay records. Read more about the 17-18 record here.

This was the first 15-16 record, though, of the group. Brody, the anchor, has a great swimming pedigree: his older brother Logan was on the 200 free relay that broke the 17-18 NAG Record in 2011 and currently swims for North Carolina.

I might be wrong, but I don’t think that you can represent another country and hold a NAG. Schooling represents Singapore internationally.

TJ great topic to bring up – the official ruling when this came up with Dylan Carter in late 2012 (the first time I’m aware of where someone broke a NAG Record after already representing another country – guys like Cavic hadn’t yet represented their other countries) is that you must hold American Citizenship, though not necessarily declare your sporting citizenship as American. So, dual citizens who represent other countries are eligible. In any case, you are correct that the Bolles relay wasn’t eligible, because I don’t believe Schooling is a US Citizen. I think coach t was just adding it for perspective though, which it is valuable for the total picture none-the-less. We’ll call Bolles’ swim the “U.S. Open… Read more »

Should be the same rule for HS (but its not). Should have a US Open type HS record and another for US citizens. Bolles has benefited from attracting (not recruiting) top international talent that makes it quite unfair for teams without the reputation of Bolles.

Garrett Simson’s mother, Kathi Simpson (the lady on the right side of your photo) also graced the cover of Swimming World Magazine in May 1976 with her relay team. So Garrett comes from great genes as well.

Jason and Michael Haney are not brothers