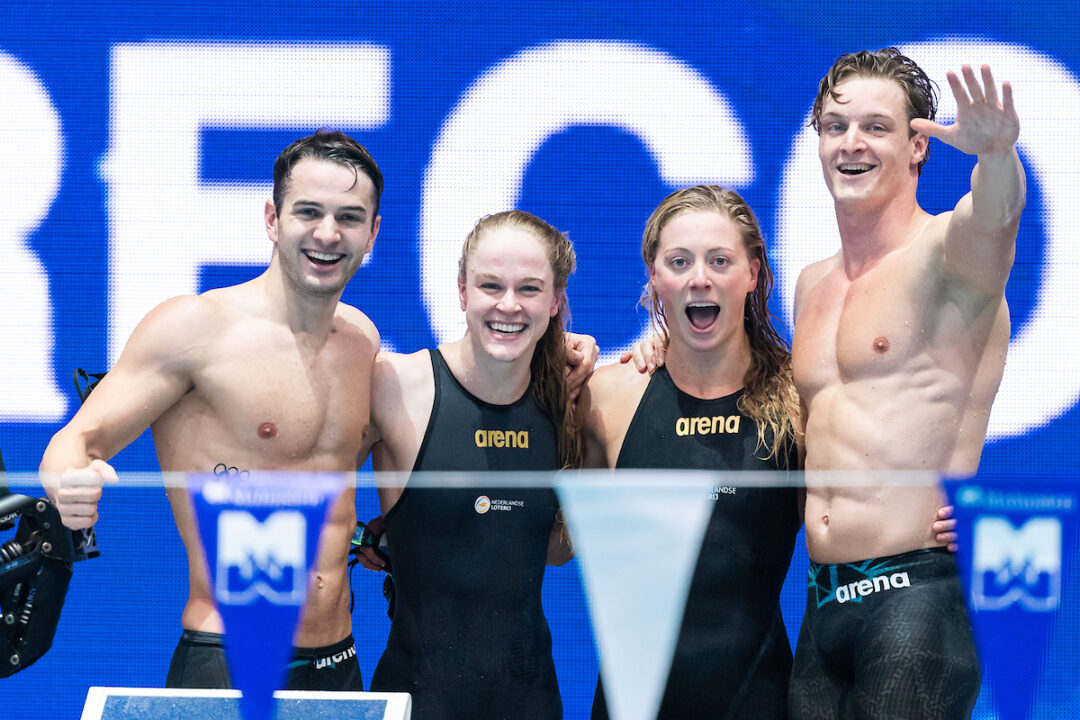 Thom de Boer anchored the Netherlands home in 20.15 as the team erased a three-second deficit to win gold and break the world record in the mixed 200 medley. Archive photo via Giorgio Scala / Deepbluemedia / Insidefoto

In a finish you had to see to believe, the Netherlands broke the world record in the mixed 200 medley relay to close out the 2021 Short Course European Championships on Sunday, orchestrating an exciting comeback win in the process.

Opting to go with the non-traditional W/M/W/M lineup for the relay, the Dutch team found itself in sixth place with 50 meters to go in the event, trailing the leading teams from Russia and Italy by more than three seconds.

Anchor swimmer Thom de Boer then delivered one of the fastest freestyle legs in history, splitting 20.15 to narrowly run down Italy’s Silvia di Pietro and Russia’s Maria Kameneva and win gold by just over two-tenths of a second.

Watch the anchor leg below (the Dutch team is in Lane 5):

To get an idea of the flow of the race and the come-from-behind effort done by the Dutch, here’s a look at the splits (and running time) of the three medal-winning countries.

The previous world record—which actually included three of the same four members of the Russian team that won bronze—also employed the traditional M/M/W/W lineup that both Italy and Russia used in Kazan.

All four Dutch swimmers had to be at or near their best to make the gold medal and world record happen.

Toussaint was two-tenths off her gold medal-winning time from the individual 50 back (25.79), Kamminga was a few one-hundredths slower than his split in the men’s medley relay final (25.48), and de Waard was slightly faster than she was on the women’s medley (24.58).

de Boer was the swimmer that showed the biggest improvement, splitting almost two-tenths faster than he did in the men’s medley relay final (20.32).

In the individual 50 free, de Boer was extremely consistent, with all three of his swims coming between 20.97 and 21.02. The fact that he had three relay splits 20.46 or better, all coming in finals, showed just how big of a relay performer he was in Kazan.