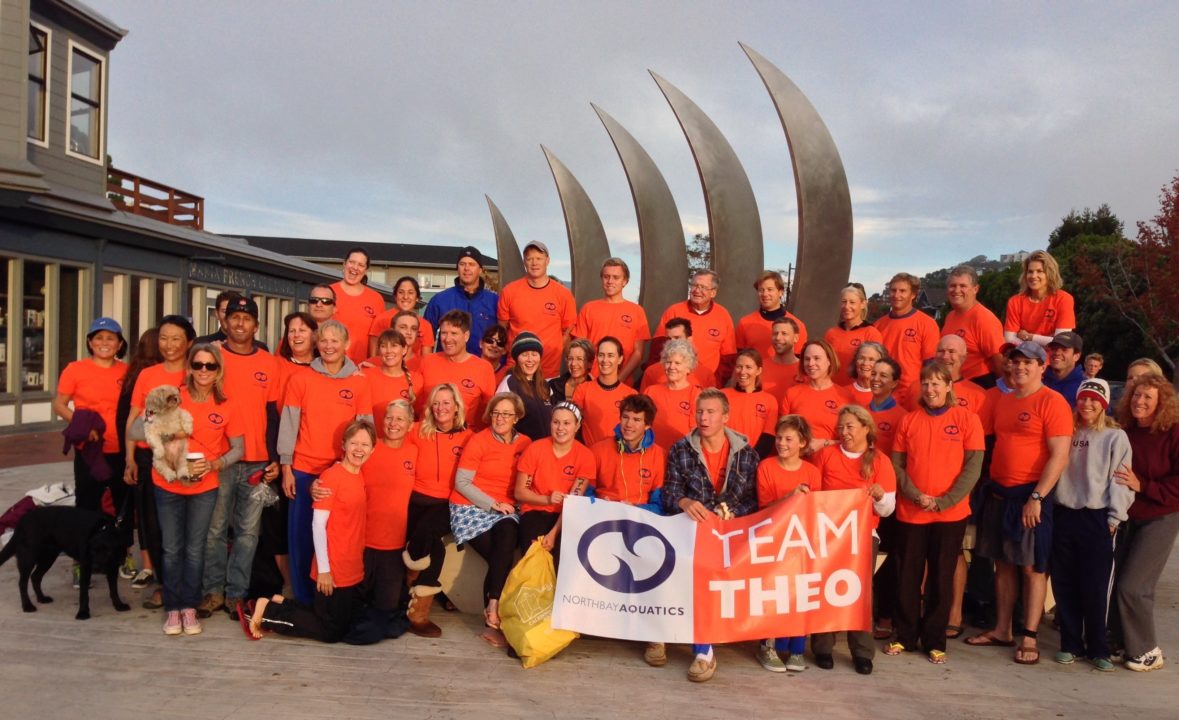 It has to be among a parent’s worst nightmares. You raise a child for eighteen years and that child excels in the classroom, sparkles in the pool, and is an inspiration to everyone he meets. He is among the best and the brightest, and this is confirmed when he is accepted into his dream college, on the short list of candidates for one of the finest institutions of higher learning in the world.  Then, shortly after he leaves for school, just when you think most of the heavy lifting of parenthood is behind you, the phone rings: “There’s been an accident…”

When I went to introduce myself to Theo St. Francis on a pool deck in Marin this past June, I already knew a lot about him. He attended and swam with Marin Academy, a rival high school to my son’s.   Theo was also a long-time member of North Bay Aquatics and he was a captain of both his teams. He was a Junior National level backstroker and was to be on the MIT swim team this fall.

Our meeting was inevitable.  The Bay Counties League is comprised of a dozen or so small high school teams in and around the north and east of San Francisco. The unwritten rule for parents in this league is to root fiercely for your team when competing directly, and band together to cheer wildly for each other when competing against the larger schools outside. So, by the time I introduced myself, Theo knew my son, our families shared many common friends, and I had already been rooting for him for quite awhile. I wanted to congratulate him on his admission to MIT and to tell him what a big deal I thought it was.

Theo immediately lit up and started talking about how he’d signed up for a freshman pre-orientation program on Ocean Engineering and they were going to Woods Hole and would develop a robotic vessel for underwater exploration. We spoke for maybe ten or fifteen minutes about MIT, its swim team, the courses he planned to take…and I walked away from that encounter thinking two things:

Theo and the other freshman didn’t end-up doing the Woods Hole trip due to scheduling issues but they did take a ferry out to an island in Boston Harbor where they were to test their newly-developed equipment. After successfully launching the robots from the pier and getting video images of crabs and other data from their craft, the group headed for the sandy, life-guarded beach for lunch and water play. There was an impact accident while there, however, and Theo had broken his C6 vertebra, leaving him with no feeling or movement below the chest, and no motor skills in his wrists or hands. He was evacuated immediately by police boat to Massachusetts General Hospital where he underwent emergency surgery, followed by a nearly a week in the Neuroscience ICU. He was then transferred to Spaulding Rehabilitation Center, where he is currently undergoing physical and occupational therapy, working to re-gain his lost self-sufficiency.

If there is any good news in this situation, it’s that Theo’s spinal cord was not severed, so nobody knows how much mobility he will be able to recover. By all reports, Theo is attacking his rehab with the same incredibly-positive attitude, humor and focus that has served him so well in school and in the pool. He’s already breaking rehab records (not surprising), and was even cleared to attend a Red Sox game in his powered wheelchair with his older brother, also a recent arrival to the Boston area as a tutor at the Match Charter High School.

If you would like to learn more about Theo’s story, or you would like to drop him and his family a note of encouragement, log into the Caring Bridge website and look for Team Theo. Theo’s mom & dad, Susan & Ray, have exhibited incredible fortitude, generously keeping the armies of Theo St. Francis fans (and there are a lot of them) informed with the latest news while Susan is camped out in his hospital room and Ray sleeps at a nearby MIT grad student dorm.

As you can imagine, the St. Francis family’s expenses are mounting. There are medical bills not covered by insurance, unexpected travel and other costs, and a home retrofit to be constructed. If you wish to send support, please contribute to the Theo Fund, set up by friends to help him and his family.

b) By credit or debit card: Please transfer funds via PayPal at http://www.paypal.com to the email account of Fund Co-Administrator Raymond St. Francis: [email protected]

There’s no fee when you sue the transfer funds>send someone money option in the PayPal menu, if you have linked your bank account to your PayPal account or if you use your PayPal balnace.  There is a flat fee of 2.9% when you use a debot or credit card.

A volunteer organization, TeamTheo is neither a for-profit nor a non-profit.  Contributions are not tax-deductible to the giver but 100% of the contributions to Theo will to toward covering the expenses related to his care and rehabilitation that are not covered by insurance.  Your support is greatly appreciated.

Finally, Theo’s story was discussed by President Rafael Reif during his MIT Freshman Class of 2017 Convocation speech on August 26th. The 39 minute video can be viewed at the link below, with mention of Theo starting about the 7 minute mark:

What a heart breaking story, but with a response that shows the power of a team! Go Theo.

Truly a one of a kind kid. I am honored to know Theo and he is an inspiration to anyone who has met him. Send him your best wishes!

Their you are amazing,strong and have an incredible will. We are behind you 100% Keep your mind strong and we know you can get through this.

What an incredible story. God is watching out for you. Keep your mind strong and you will get through this. You are an inspiration.

Dear Theo- hang in there buddy! I can only imagine what you are going through- and how lucky you must feel- to be alive! We are praying for you- stay strong- and all will be well! Dan Dunnigan

I was a perfectly healthy, active person before I suffered an accident causing me to break my C5/6 in a fall down a steep staircase. My date of injury was 9/11/12.
Like you, I have been pursuing therapy non-stop.
I would love to communicate with you to share ideas.
I am much older than you. I was age 69 at the time of the injury, but I truly was a young 69, and now at age 70…I still consider myself too young to be confined to a wheelchair. I’m walking with assistance, and am currently building up time on a walker. Hoping to ditch that WC as soon as possible.
I hope you will… Read more »