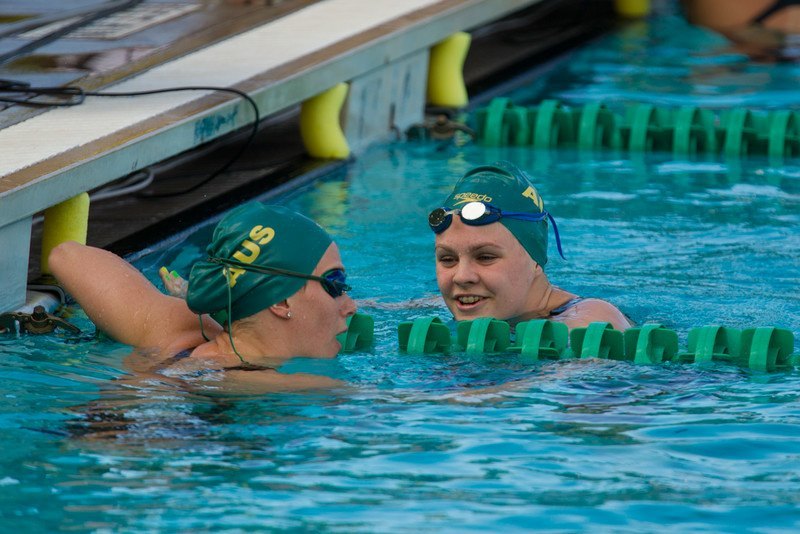 The battle for state supremacy in 2014 has concluded with Queensland taking its sixth straight title at the State Teams Age Short Course Championships at the Australian Institute of Sport in Canberra.

With a total of 2,108 points Queensland took the lead early and couldn’t be caught despite a desperate chase from second placed New South Wales on 1,756 and Victoria on 1,529.5.

After winning 8 of the 11 relays on offer, the depth in the Queensland team played a major role in securing their victory this year.  At the end of the final event, Queensland took out a number of individual and team awards including: the boy’s 16/17 years swimmer of the meet through Samuel Young, the girl’s 13/14 and 15/16 years swimmers of the meet through Minna Atherton and Alanna Bowles as well as the champion male and the champion female team overall.

New South Wales were also strong this year, stealing points in a number of events previously dominated by other states.

One of the New South Wales swimmers stealing the spotlight was 15-year-old Matthew Wilson who collected the male swimmer of the meet for the 14/15 years age group for his efforts.

Wilson started this morning’s session with a new meet record in the boy’s 14/15 years 50m breaststroke, hitting the wall in a time of 28.28 for the win. Queensland swimmer Zac Stubblety-Cook came into the wall for second in 29.56 with Victorian David Schlicht third in 29.94.

To top off an excellent morning in the pool Wilson then took out the boy’s 14/15 years 100m breaststroke less than an hour after the 400m IM setting another meet record with his time of 1:01.63. Stubblety-Cook was again relegated to second place in 1:02.25 with Health Macleod third in 1:04.22.

Wilson picked up an incredible seven individual titles and five meet records over the weekend and will leave as one to watch for the future.

Then Commonwealth Games and Pan Pacific Championship debutant Alanna Bowles continued Queensland’s run of success picking up another title and another meet record, this time in the girl’s 15/16 years 200m butterfly.

Bowles knocked over a second off the previous record, which she also held, to successfully defend her title from 2013 in a time of 2:10.34. Bowles’ teammate Lucia Lassman had to settle for second place in 2:13.26 while Tamsin Cook from Western Australia was third in 2:13.37.

South Australian Ella Bond had also had a speedy start to the session when she stopped the clock in a time of 31.34 in the girl’s 15/16 years 50m breaststroke. Bond eclipsed the previous record of 31.53 set in 2011 by Jessica Hansen to take the win ahead of Mikayla Smith (32.33) from Victoria and Rachel Gower (32.76) from Western Australia.

The records continued to fall when West Australian Braga Verhage took out the boy’s 16/17 years 50m breaststroke in a time of 28.24. Verhage just edged out Jayke Small (28.35) from New South Wales with Queenslander Grayson Bell (28.43) rounding out the top three.

New South Wales added another win to their tally this morning when Rachael Robinson finished first in the girl’s 13/14 years 200m butterfly. Robinson clocked a 2:19.15 touching ahead of Queenslanders Gemma Cooney in 2:21.12 and Emma Siddle in 2:21.97.

Australian Age champion in this event Samuel Young asserted his dominance in the boy’s 16/17 years 200m freestyle, hitting the wall almost two seconds clear of his closest competitor in a time of 1:47.69. Young was too quick for Damian Fyfe who took second spot in 1:49.66 and Ryan Leonard who was third in 1:50.32.

Queensland took a clean sweep in the girl’s 13/14 years 200m freestyle with Minna Atherton, Mikayla Messer and Krily Siebenhausen taking the top three spots and all the points on offer for the event. Atherton was the fastest of the three, hitting the wall in 2:02.23 followed by Messer in 2:03.04 and Siebenhausen in 2:03.26.

South Australian Ella Bond backed up after her speedy start this morning to add another win to her tally, this time in the girl’s 15/16 years 100m breaststroke. Bond clocked a 1:08.65 to finish ahead of Mikayla Smith in 1:10.63 and Calypso Sheridan in 1:11.52.

Queenslander Sarah Beale stepped up to take first place in the girl’s 13/14 years 100m breaststroke hitting the wall in 1:11.65, getting the better of Brooke Peterson and Chelsea Hodges who dead-heated for second place in 1:13.30.

The Boy’s 16/17 years 1500m freestyle went to West Australian Brody McGowan who finished the 60 laps in a time of 15:40.58. Second place went to fellow West AustralianNicholas De Bomford in 15:46.79 while Reece Brennan from Queensland was third.

The final event of the State Teams Age Short Course Championships was not short on entertainment value as the swimmers in the mixed 8x50m freestyle relay put on a show.  The final lap left Victoria, Queensland and New South Wales to fight for first place, going stroke for stroke to the wall. Victoria had the best touch on the wall, recording a time of 3:15.16 for the win. Queensland finished second, just 0.10 behind with a time of 3:15.26 with New South Wales third in 3:15.63.

Bud Macallister’s first assignment as WA coach here got him the boys 16-17 trophy . He & WA would be be happy with that !