Start lists for German Nationals released. And all important links. 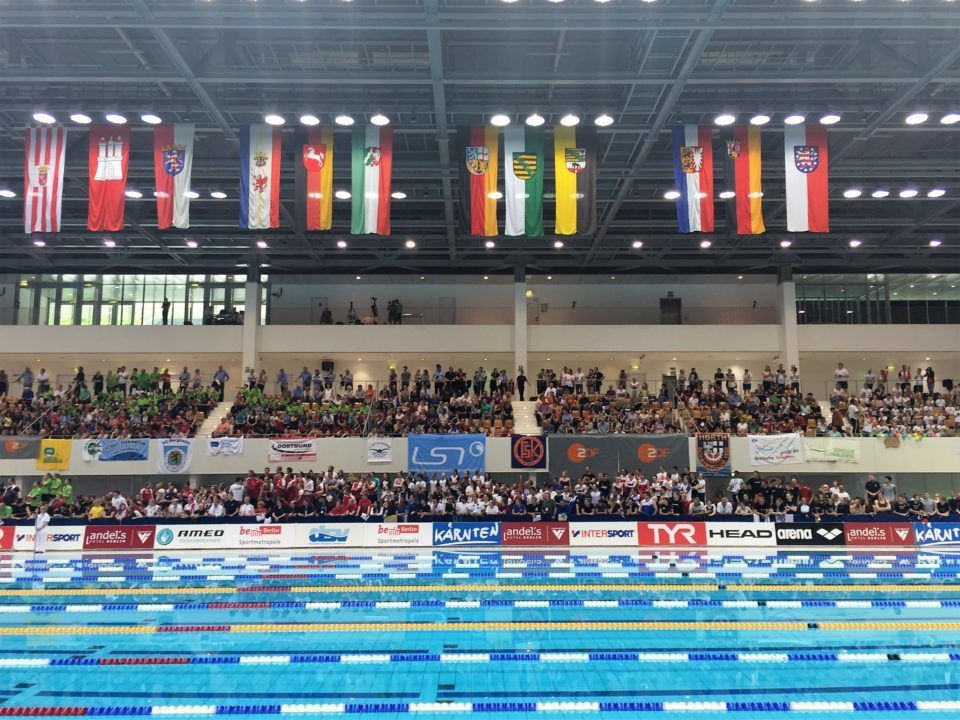 The start lists for the German National Championships, the first part of Germany’s olympic qualification, have been posted. German swimmers had to swim qualification times at National Championships in prelims and in finals and afterwards they must confirm these standards at another selected meet – at the Mare Nostrum tour or the German Open. German national head coach Henning Lambertz said this in an inverview: “I noticed in earlier days that the times German swimmers reached at the season highlights, very often were much slower than at the trials before. Statistics said that 8 of 10 swimmers performed worse at the big international meets. So our nomination procedure is an attempt to keep the performances on a good level.”

The first step of a two-step qualification process starts on Thursday in Berlin:

Of course all of Germany’s top swimmers are expected to be in Berlin – so far, everyone seems to be healthy and ready to fight for a ticket to Rio. On the men’s side, Paul Biedermann and Marco Koch only must reach a first or second place finish in the final of the 200 m freestyle (Biedermann) and 200 m breaststroke (Koch) – because they won medals at the 2015 World Championships in Kazan – they are both pre-qualified with these performances for Rio.

A view in the start lists shows that all German top swimmers concentrate on their best events and best chances to make the German Olympic Team: Paul Biedermann won’t swim the 400 m freestyle – he is the current world record holder. Biedermanns has already announced his retirement from competitive swimming after the 2016 Olympic Games. He has added the 100 m freestyle to his competition program in Berlin. Marco Koch concentrates on the 100 m and 200 m breaststroke – he won the gold medal in the 200 m event in Kazan. Dorothea Brandt, Germany’s sprint-lady, only will swim the non-olympic 50 m butterfly in addition to her favorite event – the 50 m freestyle. She could make her second Olympic team in Rio.

The top names at the German National Championships include Franziska Hentke, 4th in the 200 m butterfly at the 2015 World Championships and she won gold in this event at the 2015 European Championships (SC), Steffen Deibler, sprint specialist in the 50 m, 100 m freestyle and 100 m butterfly – one of his main competitors in the 50 m freestyle is 20-year-old Damian Wierling. Also the backstroke swimmers of the German swim club Potsdamer SV will swim head to head for their Olympic tickets: Christian Diener, silver medalist in the 200 backstroke at the 2014 European Championships, Carl-Louis Schwarz, Felix Wolf, Yannick Lebherz – the four teammates will face Jan-Philip Glania who is the fastest German backstroker in the 100 m in 2016 and he showed also many fast swims in the 200 m in the past months.

More swimmers to watch are: Jacob Heidtmann in the 400 IM – he finished fifth at the World Championships, Alexander Kunert who is a World Championships semi-finalist and the fastest German 200 m butterfly swimmer, he is on the hunt for Michael Groß’s German record from 1986  and also Jenny Mensing wants to make the Olympic team in the 100 m and 200 m backstroke. Alexandra Wenk is one of Germany’s most versatile swimmers – she concentrates on the 100 m butterfly and 200 m IM.

One of the youngest swimmers who has a chance to qualify for Rio is 17-year-old Johannes Hintze – he is an excellent allround-swimmer and wants to attack the nomination times in the 200 m and 400 m IM and 200 m freestyle.

Here are the fastest German swimmers in 2016 and the qualification times for heats and finals. Only Dorothea Brandt, Sarah Köhler, Jenny Mensing, Alexandra Wenk, Franziska Hentke, Marco Koch and Philip Heintz swam faster in 2016 than the required standard for the finals.