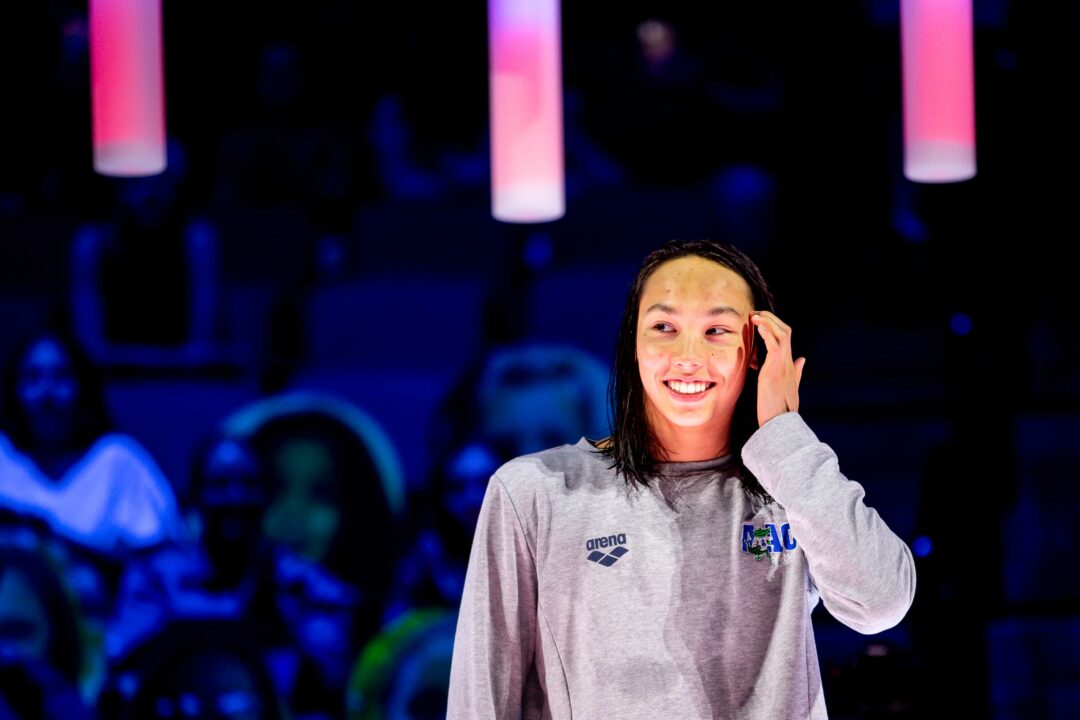 2020 U.S. Olympic medalist Torri Huske announced that she’s signed a swimwear deal with TYR on Friday, making her the third high-profile swimmer set to begin their freshman year of college to do so.

Huske, 18, will join Stanford University in the upcoming collegiate season.

Terms of the deal have not been made public.

Similar to the recently-announced partnerships signed by Regan Smith and David Curtiss, both with Speedo, Huske’s deal will allow her to remain NCAA-eligible, and is only possible due to the organization’s recent suspension of its limitations on athletes benefiting from their name, image and likeness (NIL).

In an Instagram post, TYR said: “Torri will have the opportunity to represent the brand at both international and national level competitions and pro meets.”

Exactly what the parameters of the NCAA’s new rules on this will be has been a hot-button issue of late in college athletics.

The NIL rules, which were officially relaxed on July 1, will be a key topic at the NCAA’s special constitutional convention in November, where the organization’s core principles will be re-drafted by a 22-person committee.

The current guidelines say that student-athletes are now able to accept money from businesses in exchange for the company featuring them in advertisements or products, along with using their status as an athlete to promote their public appearances for companies. In the leadup to the opening of the proverbial flood gates, there were many iterations of proposals, one of which included precluding student-athletes from signing endorsement deals with brands that already sponsored their collegiate program.

Huske will be joined by Smith at Stanford this fall, giving the Cardinal two of the top female swimmers in the country. Smith was our #1 ranked recruit in the HS class of 2020, but deferred her enrollment for one year to focus on the Olympics.

This could create potential conflict at Stanford, with the team sponsored by arena, and two of their top swimmers signing on with rival brands Speedo and TYR. The TYR announcement ominously omitted any mention of her representing the brand at collegiate competition.

Curtiss, meanwhile, isn’t being considered a full-sponsored athlete by Speedo right now, but the partnership still establishes a relationship that wouldn’t have been allowed a year ago.

University of Miami quarterback D’Eriq King became the first NCAA athlete to sign an agreement with another major sports organization earlier this week, announcing a partnership with the National Hockey League’s Florida Panthers. King’s deal will have him appear at games and events, engage with fans, and even design a merchandise collection. Ironically, the new rules would preclude King from signing a contract in his chosen sport, but allows him to sign a ‘sponsorship’ with a professional team in another sport.

Any ballpark idea of what dollars are involved in these deals? Are we talking free suits and gear, thousands or ten thousands of dollars? What about the NCAA limits on use of agents? It would seem that an athlete would need an agent to negotiate the best possible deal, otherwise some companies may take advantage of these athletes and sign long term exclusive deals at rates far below what the market rates end up being?

We have no idea. It’s not entirely clear what negotiating leverage these college athletes have. So we know Ledecky got $7 million over 7 years, but that was for all meets. If these swimmers are only wearing their gear in international/national level competition, and not college, that dramatically impacts value. Also, while accomplished, they’re not Ledecky.

Given the scale of what college football players are getting, we could project something along the lines of “tens of thousands of dollars,” but also, there are a lot more marketable football players than swimmers – there are only a handful of American swimmers who really move the needle. So there’s some leverage there.

We’ll report if we can get any firm details, but… Read more »

Trying to get my daughter signed with PBR.

Good on ya whether that’s Pabst or Professional Bull Riding!

I told our son “Your NIL is NULL!” Is that good parenting?

Chasing that bag while getting that degree, you go Torri!

You mean the suit that had the only individual WRs broken in it in Tokyo?

NILs currently do not supersede the college’s arrangement to our knowledge, the NIL is for the club/Intl/personal social media side of things. If she goes to a Pro Series or US Open, she is a TYR athlete.