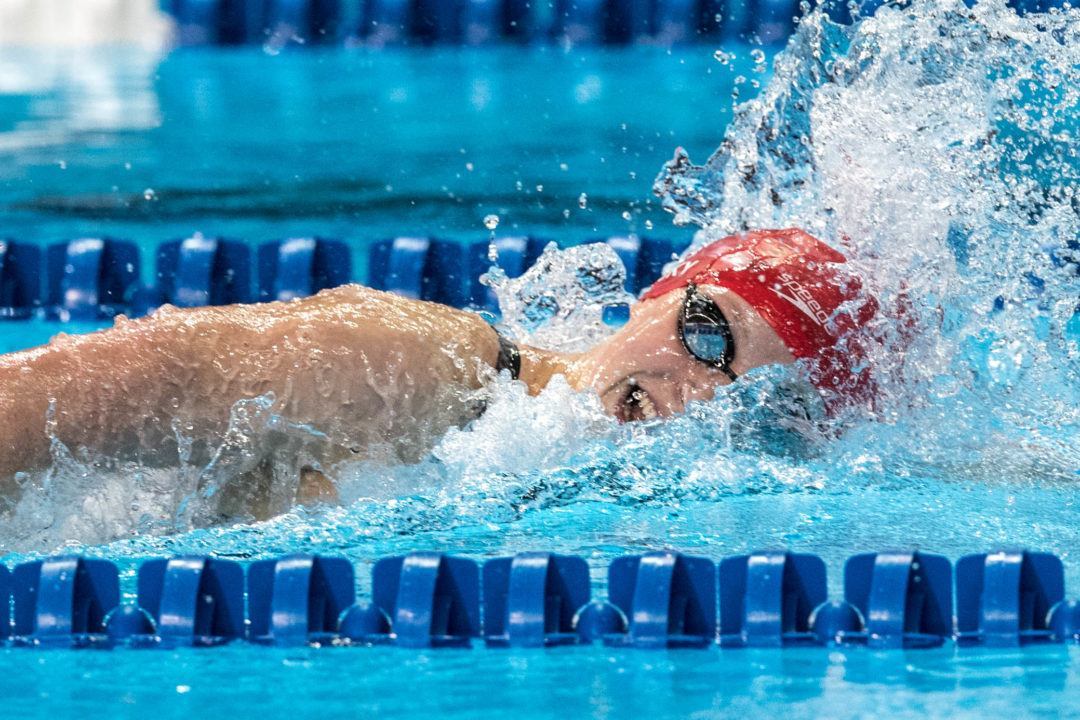 Even without former NCAA runner-up in the 200 free Simone Manuel in the group, Katie Ledecky (above) and the Stanford women swam the fastest 800 free relay in history. Archive photo via Mike Lewis/Ola Vista Photography

The Stanford Cardinal, anchored by their Olympic champion Katie Ledecky, have broken the Stanford, Pac-12, American, U.S. Open, and NCAA Records in the 800 yard freestyle relay, swimming a 6:49.42 on Wednesday to open the 2017 Pac 12 Championships.

The team of Lia Neal, Katie Drabot, Ella Eastin, and Ledecky, all Americans, clipped off the Cal effort from the 2015 Pac 12 Championships where Cierra Runge, Liz Pelton, Caroline Piehl, and Missy Franklin combined for a 6:50.18. That meet came about a month before Missy Franklin swam a 1:39.10 in an individual 200 free, which was easily the fastest in history. At NCAAs that year, Cal was a touch slower in 6:50.99.

What’s most impressive about this Stanford relay is that their pool of talent is so deep, that this wasn’t even their best relay. The team didn’t use Simone Manuel, who could very well win the individual 200 free at NCAAs, on the relay. Instead, she focused on the 200 medley relay that Stanford won and anchored them with the fastest 50 free relay split in history. Manuel’s flat-start best in the 200 free, from 2015, is a 1:41.15 – implying that even at Pac 12s, Stanford left at least 2 seconds on the table by choosing to save her for the other 4 relays (which, incidentally, could all break records of their own before they’re done).

Ledecky’s anchor on this relay pulled Stanford from about a three-tenths’ deficit to USC when she left the block to a 4 second margin of victory over Cal when she finished.

History Lesson – The first sub-7:00 800 free relay came at 2008 SEC Championships when Ava Ohlgren, Caitlin Geary, Melissa Marik, and Emily Kukors swam 6:57.28. Cal’s 7:00.89 had previously been the record. Arizona actually won NCAAs in the event that year with a 6:58.69, though, but after that the flood gates were open. Cal went 6:52 the next year, and the NCAA winner hasn’t been slower than 6:55 since (thanks mostly to Cal and Georgia).

I think the old record had caroline piehl or someone else on it, when they broke it at Pac-12’s. I didn’t Cammile Cheng came on board at NCAA’s where they went slightly slower

Also of note — the youth of the top three teams!

And look at the incoming class for Stanford . . .

ugh. as a cal fan it’s painful to think about the absurd talent that stanford will have next year.

And they did this WITHOUT the second fastest 200-yd freestyler in history (Simone). Unreal

Schmitt is the second fastest 200-yard freestyler, followed by Ledecky then Simone

Sorry – I posted before noticing the article mentioned my point about 3 times!