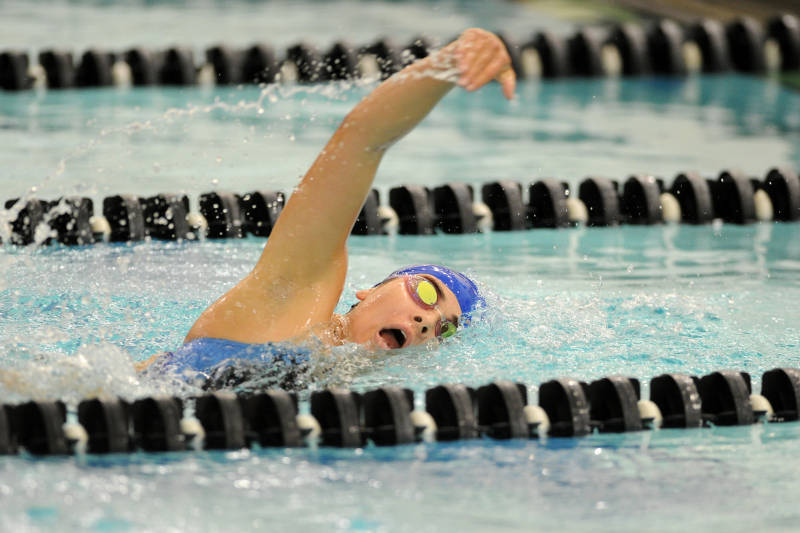 NOTE: Mina Glenesk finished second in the women’s 1000-yard freestyle with a time of 10:27.90. That time is the best in the Atlantic 10 by six seconds.

UP NEXT
The Billikens return to action tomorrow morning to host UALR, McKendree and Marshall at 9 a.m. at Simon Rec Center

ST. LOUIS – Little Rock swimming and diving took two dual-meet victories while winning six events against Saint Louis and Western Illinois on Friday night at the Simon Recreation Center. The Trojans defeated the Bilikens 120-97 while taking a 171-45 victory over the Leathernecks.

Little Rock got the evening started on a great note as the team of Laura Ruiz Astorga, Nuria Gallego Murcia,Courtney Coe and Emma Doll won the 400-yard medley relay with a time of 3:57.83. The team of Savannah Fissenden, Ginger Bryant, Isabelle Finzen and Imre van Huyssteen placed third.

In the first individual event of the night, Tori Fryar won the 1,000-yard freestyle with a time of 10:27.44 — her second-fastest time ever in the event. KateLin Carsrud came in fourth.

The Trojans took another win in the 400-yard individual medley as Jinson Kang came through with a time of 4:41.07. Rachel Maradyn, Kayla Grimm and Amanda Dreyer took third, fourth and fifth, respectively.

Finzen grabbed her third individual win of the season and second in a row in the 200-yard butterfly as she finished with a time of 2:10 flat — a new personal best for the freshman. Coe finished just .14 of a second behind Finzen in second and Bryant finished fourth.

van Huyssteen won her first event of the season in the 200-yard breaststroke as the sophomore finished with a time of 2:26.25 — her second-fastest time of the year. Bryant and Gallego Murcia took second third whileJessie Baldwin finished fifth.

Little Rock’s sixth and final victory of the night occurred in the 400-yard free relay as the squad of Coe, Fryar, Kang and Ruiz Astorga won with a time of 3:34.38. The group of Finzen, Fissenden, Charis Won and Saidya Kistow finished fourth.

Samantha Gray took second in the one-meter dive with a score of 2:13.65 — her best score in the event this season.

Doll nearly had a win in the 100-yard freestyle as she came up just .07 of a second behind Saint Louis’ Elaine Mahon with a time of 53.90. Kistow finished fourth while Kharlamova and Goff finished seventh and 10th, respectively.

Ruiz Astorga placed second in the 200-yard backstroke with a time of 2:06.93. Teammate Jessie Baldwinplaced third with a new personal best of 2:11.65. Won, Fissenden and Ashley Strohmeyer came in fourth, sixth and seventh, respectively.

After winning the first individual event of the day, Fryar returned in the 500-yard freestyle and took second with a time of 5:07.70 — just .08 of a second off the winning time. Carsrud placed third while Dreyer andAnela Everett finished fifth and ninth.

The 200-yard freestyle saw Doll take a fourth-place finish with a time of 1:59.27. Won, Kistow and Vasiliki Falaina came in sixth, eighth and 11th, respectively.

Before winning the 200-yard breaststroke, van Huyssteen finished fourth in the 50-yard freestyle with a time of 25.47. Courtney Goff, Ann Kharlamova and Cassie Sanchez finished fifth, seventh and eighth, respectively.

The Trojans will have a quick turnaround as they’ll get back in the pool with Saint Louis, Marshall and McKendree on Saturday morning at 9 a.m., in St. Louis.

Neaveill roasted his competition in the 50-free, setting a personal-best for first place in 21.57. Freshman Samir Almhiemid, swimming in his first race of the season, came in second with a time of 22.18 in the event.

Dyke also etched a new personal record with a time of 1:54.48 to place first in the 200-back. Meanwhile, Chance McQuigg also marked a new personal-best while finishing second with a 47.09 mark in the 100-free.

“We had a pretty solid meet where we are seeing the results of what we have done training-wise over the past couple of weeks,” said head coach Greg Naumann. “I’m seeing our longer races being finished better than what we saw in our first meet of the season. We are seeing great results in our speed right now. That had been a huge focus on the beginning part of the season, and our relays and sprint events are showing the results of the teams hard work in our speed training.”

The Leathernecks’ men’s relay teams were strong, with the quartet of Brennan Bladel, McQuigg, Neaveill and Joshua Hill placing second in the 400-medley relay (3:31.76). In the 400-free, Almhiemid, Seth Brady, Dyke and Deven Ries came in third with a time of 3:16.47.

The Purple and Gold’s 400-free women’s relay team came in third, the best of any Leatherneck in the female events. Miranda Mathus, Dana Kaftan, Erica Hagen and Casey Roberts combined to touch in 3:41.62. Western came in fourth in the 400-medley relay with a 4:03.88 touch from Haley Locke, Hagen, Mathus and Roberts.

The freshman Roberts had the best individual touch of any Western woman, finishing fifth in the 200-free with a mark of 1:59.64.

“We definitely saw some tired swimming as we got to the last couple of events,” Naumann said. “We had three straight days of very difficult training, accompanied with some big gains in the weight room. Some are pretty tight and tired, but this is part of what we do in our sport.”

Melanie Pearson (237.30) and Colin Parker (241.80) posted sterling dives for the Leathernecks to each claim their respective 1-meter event. Quetzal Gallagher‘s score of 219.40 claimed him second in the men’s 1-meter.

“The divers all did very well,” said Naumann. “Melanie (Pearson) is diving very consistently, which is a not of a surprise even with her nursing department demands on her time, as well as her own chronic injuries. She definitely gives her best for a short amount of dives. Our two guys continue to show improvement, and are challenging one another on a regular basis.”

Western Illinois will next swim on Saturday, November 12 at Valparaiso, with the meet beginning at 1 p.m.