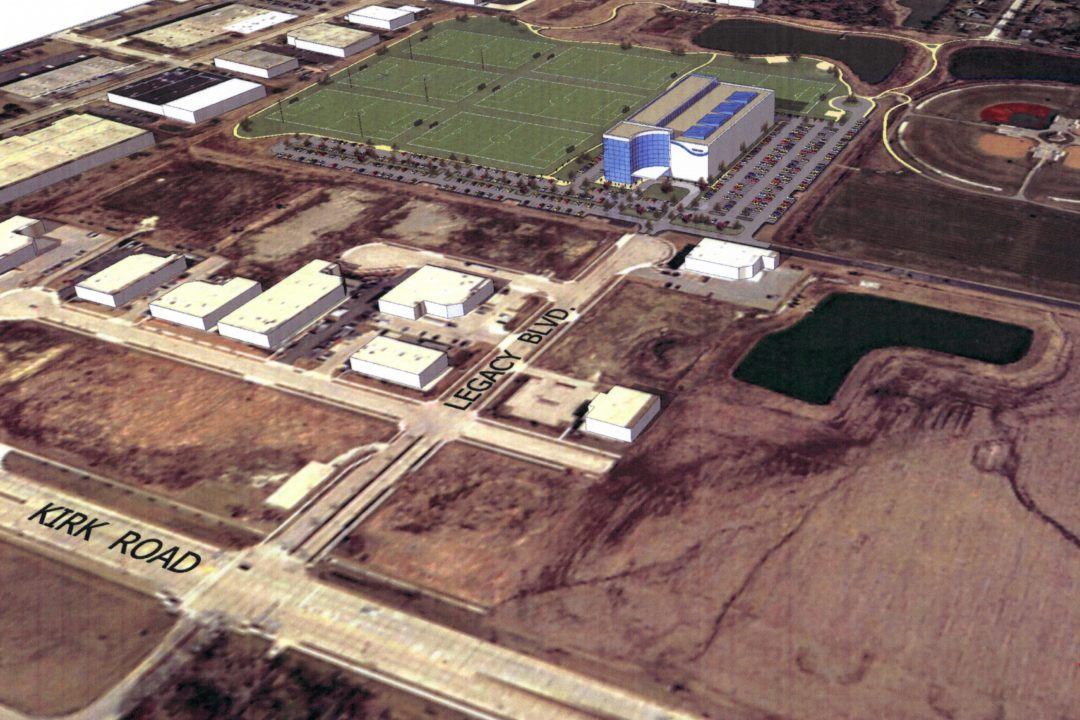 The facility will include one 50-meter pool and a smaller 4-lane 25-yard pool. Current photo via SwimCity USA

St. Charles, Illinois, in the western suburbs of Chicago, is planning to break ground on a new world-class aquatic center in 2019, in part through the support of the Michael Phelps Foundation.

The project, dubbed the St. Charles Aquatic Center, will have a 10-lane, 50-meter competition pool along with a smaller 4-lane, 25-yard warm-water, zero-entry pool for “recreation, therapy, and teaching.” The project is being pushed by Swim City USA, a group whose mission it is to make the facility a reality. The group contracted the Isaac Sports Group (the same group that did the study on tech suits for USA Swimming) to conduct a feasibility study.

The pool will be built on land already owned by the St. Charles Park District, specifically at East Side Park. The cost of the facility is estimated at $19 million.

They plan to sell the naming rights to the facility to a “major corporation” to help fund the project. They plan on leaving the district with not only the natatorium, but with an endowment to help cover maintenance.

According to a Facebook post by Swim City USA, the Michael Phelps Foundation has committed to give a grant to the facility to help “over 1,000 children-in-need” to learn to swim.

“The St. Charles Aquatic Center will be a great addition to a wonderful community,” said Marissa Fortier, the deputy director of the Michael Phelps Foundation We are thrilled that the Center will provide services to everyone, including the underserved. We are excited to offer our programming at this impressive new facility and have been looking forward to announcing that the foundation will be providing a grant so that over 1,000 children-in-need can learn to swim.”

This new pool will help alleviate that strain, but initial designs, which have seating on just one side of the pool, indicate that it won’t be an upgrade for the state’s high school championship meets. Current Illinois rules require that seating be available on at least 3 sides of the pool for it to be eligible to host the state championship meet. That limits the event to a two-site rotation between Evanston Township High School and New Trier High School. The result is an exciting spectator and competitive experience, but a challenging athletic experience. The Evanston pool is only 6 lanes, with a small 20 yard pool for warm-up/warm-down, while New Trier has no warm-up/warm-down pool.

There are very few 50 meter pools in the state of Illinois, and the ones that exist (Northwestern’s has very limited seating, while the facility at the University of Illinois-Chicago has seating on only two sides of the competition course) don’t meet the seating standards for the high school state championship meet.

That’s great. Many municipalities are looking for ways to close pools (too expensive to maintain) or build “water parks” that cannot teach kids how to swim. Nice to see some people thinking differently.

This is somewhat close to where I live. In fairness, lots of towns have very nice swimming facilities around here. Many are essentially water parks. I think the “shortage the author refers to is more restricted to large competition pools. As these pools are usually outdoors, it’s perhaps not surprising that a state with IL’s climate doesn’t have many LCM pools.

So sad. Why don’t you delve further down the rabbit hole and disclose the alleged politics and greed that rule the so-called three sided requirement for seating. What a sham. Does any other state have such a ridiculous requirement? Why?

That requirement jumped out at me, as well. Depending on what you consider “seating”, Jamail/UT Austin doesn’t qualify!

You will never get the IHSA, New Trier and Evanston to give up their monopoly. What is really sad is that their greed as at the expense of what is good for the swimmers.
Oh to be in the rich good old boys club, or in the pockets of the IHSA.

Speaking for ETHS and I do, we don’t want to host State. Please please take it off our hands.

Look at Ohio and where high school state meet is. Not at Ohio State which has an amazing pool good enough for NCAAs and US Nationals. It sadly all comes down to $ and the greedy high school league admin. MN has had theirs at the U ever since the new pool was built in 1990. Obviously no seating requirement there- smart people.

It’s not a requirement…it’s just tradition. Also, you’re surprised by politics, greed, and corrupted occurrences from the state of Illinois??? Illinois isn’t a hotbed of transparency–Chicago isn’t called the “windy city” for nothing.

Wasn’t planning to chime in but the facts as outlined above are false. As coach and host at Evanston we would be ecstatic for someone to build a pool that has the seating to host the State meet. 3 sided is not the issue. Seating capacity and willingness is. We have had 5 brand new beautiful pools built in our conference each with between 3-600 seat capacity. Our pool has 1200+ seats. The only reason we host. We could move to one of these other pools with far less capacity as long as Mom and Dad and teammates don’t want to come watch and one of them would host. Schools don’t want to build a facility that will host State… Read more »

Schools don’t want to build a pool with seating for 1200 anymore because it’s not fiscally responsible. Hosting the IHSA State Meets won’t ever pay for the extra construction cost of adding 600-900 additional seats for spectators that sit empty the other 361 days a year. Pools are expensive enough, and there are too many competing interests for the limited school district infrastructure budgets to build a HS pool with that much superfluous capacity.

I agree so I suggested build in the deck space and or dryland space in the balcony and use pull out or portable bleachers for the big meets.

Agree with the sham comment by Tim Jenkins. I think the question are: 1) How much more money would it cost to cover 2 more sides of seating at this facility to meet the requirement?, and 2) Can we raise this much to get it implemented?

If the “three sides” thing was a rule (and there seems to be some question whether that’s actually true), it would be stupid to throw further millions of dollars into this project just to accommodate two HS meets a year. Better to build the best facility you can with the most seating capacity you can afford, however that’s configured, and then go about the process of lobbying for a rule change. Trust me, if they build a pool in the Chicago suburbs that can accomodate more spectators and has more deck space than New Trier and Evanston, and the vast majority of the HS swimming community in the state will immediately be on board with moving the event.

SIU-Carbondale also has a 50 meter pool but only two sided seating. There is a brand new, beautiful 50 meter facility in Edwardsville built by the Edwardsville School District, but that doesn’t meet the seating requirements either. What a shame.

Having swam in both pools mentioned plenty of times and knowing several people who have swam at IHSA Champs, I can definitely say that those are better options for everyone involved (other than greedy admins).

You see the problem with hosting the IHSA state meet down state is that a majority of the teams that compete at the highschool state meet and club state meet all happen to be within the Chicago suburbs. There’s no point in having almost every swimmer in the state of Illinois road trip downstate for an event like that.

SIU has spectator seating for 600, and the new aquatic center in Edwardsville has spectator seating for 300. Not sure how those are “better options” when the HS championship meets are currently bulging at the seams in venues with seating for ~1200; especially when you consider that they are 5 and 4 hours, respectively, away from the Chicago area where the overwhelming majority of the meet participants would come from.

Every time a 50-meter pool is built in USA that’s a great news for American swimming overall.

What is a “zero-entry” pool?