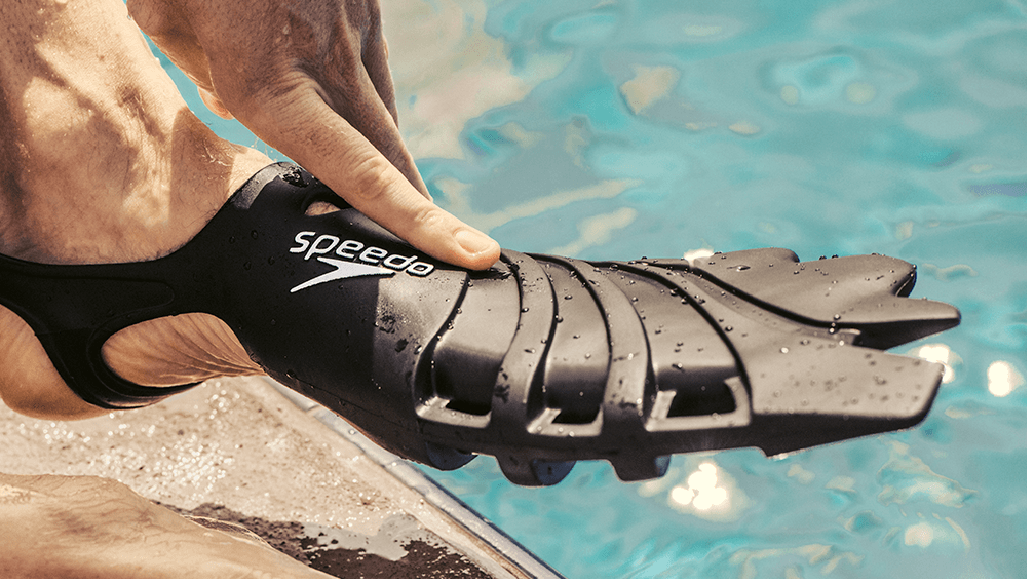 This is the latest accolade for the cutting-edge new fitness and swim training fin inspired by the pectoral fin of the Humpback Whale.

Speedo’s Nemesis Fin, the cutting-edge new fitness and swim training fin from the world’s leading swim brand, has been named Gear of the Year by Men’s Journal magazine as one of the “very best” new products of 2014.

Designed using biomimicry and inspired by the pectoral fin of the Humpback Whale, the Nemesis Fin is one of only 50 products – out of thousands tested – selected by the editors of Men’s Journal as the best of the year and is honored in the December 2014 issue of the leading men’s lifestyle and gear magazine, on newsstands now.

The editors of Men’s Journal, who note that “in the pool, [we’re] all for anything that helps [us] perfect technique without having to think about it,” selected the Nemesis Fin for doing “exactly that by copying the anatomy of a humpback whale,” and for its results – “more speed in the pool, quicker times, and less boredom.”

“We’re incredibly proud that the Nemesis Fin has been recognized by Men’s Journal as 2014’s Gear of the Year,” said Barry McGeough, Speedo USA’s Vice President of Hardgoods. “It is a huge honor, and a testament to Speedo’s heritage of innovation.”

It is the latest in a string of awards for the Nemesis Fins, which won Outside magazine’s coveted “Gear of the Show” Award at the Outdoor Retailer Summer Market show earlier this year, and was also featured in Triathlete magazine this summer – all honoring the Nemesis Fin for its innovative design.

The scalloped outer edge of the Nemesis Fins, which mimics the tubercles found on the Humpback Whale’s fin, creates greater surface area for water to pass over versus a smooth, straight edge, allowing the swimmer to push more water during kicking drills and training sets.

The medial edge openings of Speedo’s Nemesis Fins are larger on the bottom-side and smaller on the top-side, also like on the pectoral fin of the Humpback Whale, creating more resistance on the down-kick, while flow channels on the top and bottom of the fins help guide water in the proper direction for maximum kick efficiency.

Made with Injection Molded EVA (IMEVA) Foam, the fins are naturally buoyant, aiding the swimmer with an elevated body position, keeping hips and feet in a more streamline position – all helping to improve efficiency, swim technique, and to help you swim faster.

“Speedo has looked to nature for design before, most notably with the revolutionary Speedo FASTSKIN line of racing swimsuits inspired by shark skin,” added McGeough. “With the Nemesis Fins, we’ve built new technology for swimmers of all levels using what we’ve learned from studying the Humpback Whale, which moves through water with incredible speed and agility considering its (massive) body size and (small) fin size.”

The Nemesis Fins retail for $39.99 and are available via www.SpeedoUSA.com and at select sporting goods retailers now. To learn more, visit: http://explore.speedousa.com/innovation/nemesis.html#nemesis

You ask other to leave their impression but you don’t leave yours. ..

I am not a fan. I consider myself to be a pretty good kicker as I can kick sub :30 for fast 50’s with or without a board and no fins. I find that when I wear these fins and kick on the surface it is much harder to feel any propulsion from the kick. I also find that when I go to load my kick it feels as if my feet are coming very high out of the water. The loading of the kick happens very fast because of the buoyancy of the fins and I guess what they are describing as “flow channels”. It is also much harder to feel a connection between my kick and my catch… Read more »

I bough these for my son who is a competitive age group swimmer and considered to be a good kicker. His feedback was exactly the same as the points JG has mentioned. Surface kicks feel slower and awkward and does not feel as much propulsion as he does with the standard fins. Underwater kicks feel really good with these fins though. I guess Humpback whales spend more time kicking underwater than on the surface whereas a swimmer has to distribute his time between both kicks, something Speedo might have needed to consider!

Interesting! I have become intrigued with these fins not for swimming, but SCUBA. I posted questions on SCUBAboard and was met with derision, although no one had used them for diving. My interest stems specifically from the design inspired by the whale, and now I hear swimmers complaining about surface kick performance and extolling the virtues of the fin underwater. Well folks, that is what I am after. Thank you!

I tried them, to be honest, I was not that impressed. Pretty gimmicky if you ask me…