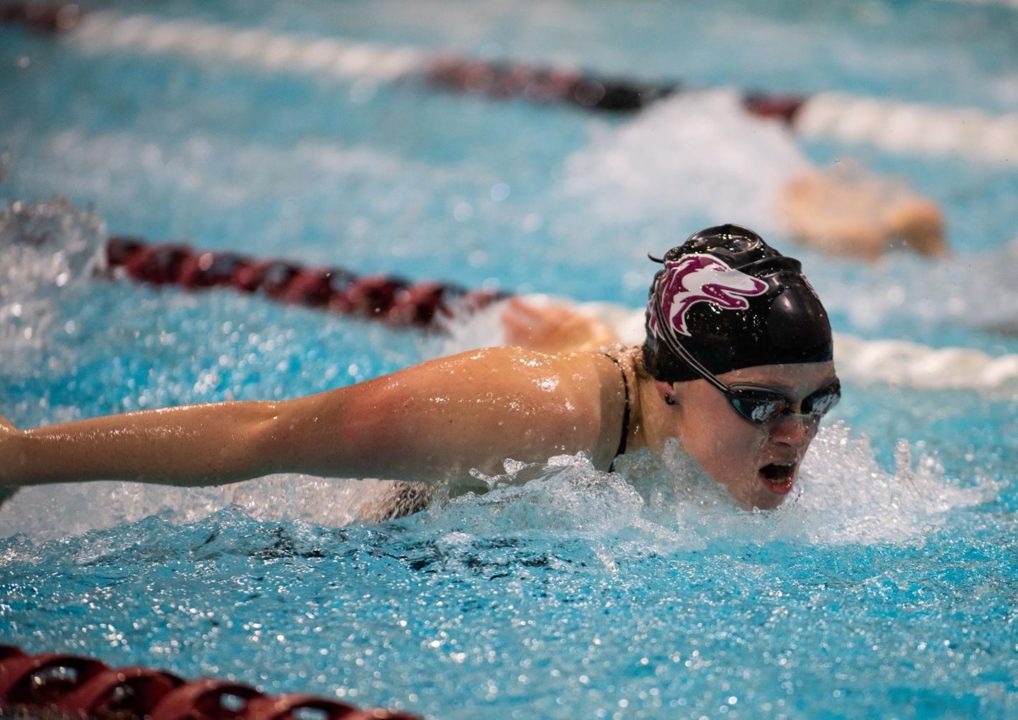 For the first time in six years, the Southern Illinois women’s swim team defeated Missouri State, edging the Bears out by 26 points. The men’s team, however, couldn’t earn enough points to defeat Missouri State over the two-day meet.

The men’s teams are members of the Mid-American Conference. At the 2021 conference championships, Missouri State earned second place, with Southern Illinois trailing almost 100 points behind for third.

Both women’s teams are members of the Missouri Valley Conference, and the two teams typically hold the top spots at conference championships. Last season, Missouri came off of its 17th conference championship in 19 years, and both the head coach and head diving coach were named MVC Coaches of the Year. In a preseason poll released before this meet, Missouri State was favored to win the MVC championships this season. Southern Illinois, though, bested the favorites to win by a narrow margin.

The Bears solidly defeated the Salukis over Friday and Saturday, with senior Arthur Cury securing the first win for the team in the 200 IM (1:52.47). Cury would later swim a 1:41.31 in the 200 freestyle, out-touching SIU’s Zheng Yang Yeap by .17 seconds.

Another senior, Pawel Krawczyk, edged out teammate Dylan Moffatt to take home the win in the 500 freestyle. Krawczyk swam the event in 4:37.45, while sophomore Moffatt took second place with a time of 4:38.83. An eerily similar phenomenon played out just two events later, when Missouri State senior Michael Hampel won the 100 breaststroke (56.77), followed by sophomore teammate Nick Schuster just over a second later (57.94).

The battle between the seniors and the sophomores continued for Missouri State when Krawczyk swam a 1:52.16 200 butterfly to narrowly beat sophomore AJ Huskey (1:53.14). The next day, however, the sophomores would reign supreme as Moffatt defeated Krawczyk to take home the 1000 freestyle win with a time of 9:41.16.

Though the Salukis would ultimately lose, they started off strong in the men’s 200 freestyle relay, winning with a time of 1:23.56. The team wouldn’t score an individual win, however, until junior Adam Cernek won the 200 backstroke with a time of 1:49.30.

The Salukis would round out the meet by winning the 400 freestyle relay with a time of 3:03.51. The team consisted of Cernek, William Chavez, Czuvarszki, and Yeap.

SIU got a big boost from its newcomers to aid its win against Missouri State. Freshman Celia Pulido took home three individual wins at the meet, including a 200 backstroke swim of 1:57.56 that broke the school record. Pulido also won the 200 IM by about five seconds (2:03.63) and the 100 backstroke by three seconds (55.12).

Another freshman, Ali Robertson, surpassed record-holder and teammate Mima Zaborska to win the 100 breaststroke, and the pair went 1-2 with times of 1:04.35 and 1:05.29.

On the diving side, another freshman helped the Salukis with first-place finishes. Farida Moussa scored 233.55 points on the one-meter, earning first, and 255.30 on the 3-meter, earning another first.

Missouri State began the meet with a win, its 200 freestyle relay team swimming a time of 1:35.03.

Another major event for the Bears was the 1000 freestyle, and the trio of Margula, Sam Hietpas, and Howell went 1-2-3, all finishing within seven seconds of each other.

Despite a few major wins, the Bears weren’t able to catch up with the Salukis.

“On the women’s side we learned a lot about what we need to be doing and areas for improvements,” head coach Dave Collins said in a press release at the end of the second day. “SIU was very good and humbled us a little bit, which we can build on. If we would have performed on day one like we did today it would have been a different outcome. We were slow getting started on Friday and we were playing catch up the rest of the way. It is early, we learned a lot, and I look for us to be much improved in the next meet.”

Missouri State will travel to the TYR Invitational hosted by FIU on October 8 and 9 for its next meet. Southern Illinois will face off against McKendree on Friday.

Missouri State’s women getting beat by Southern Illinois on the strength of some new recruits! MVC is going to be fun to watch this year. They will be the top two teams this year at the conference championships with Indiana State and Illinois State battling it out for the third spot. I think Little Rock is going to make some moves too.

Like most swim programs in the US, boosted by HUGE international talent.

Definitely noticing the international presence on certain MVC teams, especially on Missouri and Southern Illinois, but other schools have or had them (e.g., Grom in Little Rock, Illinois State’s French diver). Coaches have to find a way to win. Fast internationals should make the conference stronger, which will attract more U.S. talent. Remember Missouri won it last year with their two big guns (Howell and Miller), who are American, leading the way. And they’re back.