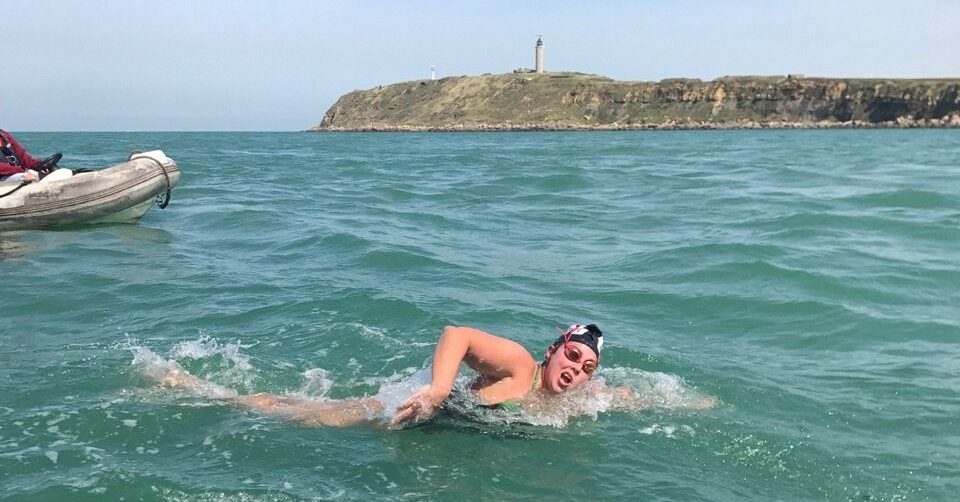 Heather Roka double-crossed the English Channel in August, making her just the tenth American to accomplish going from England to France, and then back. Archive photo via Lyndsey Roka Mitchel & Isabel Houzlet

Heather Roka, a Gardner-Webb alum and open water swimmer, has completed the exceptionally difficult double-crossing of the English Channel.

The 42-mile journey took Roka 25 hours and seven minutes, and she became the tenth American and 38th person to ever complete the challenge when she completed the swim in August.

Roka began training to cross the English Channel in 2012, and completed the 12-hour swim for the first time in 2017.

She said the original swim arose out of her desire to seek out a new challenge.

“I’ve always been a distance swimmer, and I’m not sure where that desire came in, but I definitely remember in college, the folklore of being able to do [the Channel crossing], the Mount Everest of swimming,” Roka said in Gardner-Webb’s podcast, Inside the Webb. “As I finished at Gardner-Webb and tried to adjust to that new challenge, I randomly signed up with a spontaneous decision to go for it, and I met amazing people.”

Roka said in the podcast that the idea for the double-crossing came after she completed her first crossing and her friend told her that in about six months, she’d probably sign up for a double-crossing. In 2018, six months later, Roka said that she did, in fact, sign up for a double crossing. Not only do you have to sign up to cross the Channel years in advance, though, but the COVID-19 lockdown kept her from completing the rigorous training she wanted to go through before attempting the swim.

The swim is long, cold, and dangerous. In addition to temperatures that can induce hypothermia if you’re in there too long, the Channel teems with jellyfish. Roka noted in the podcast that even though she saw a lot of jellyfish and received some minor stings, she only received one sting that really hurt.

Roka said this was her first attempt at a double crossing, and that she never had any failed attempts before this. She said she was perhaps “a little too stubborn.”

She said there was one point, about three hours on the way back, when she thought of stopping, because she was really cold and had a ton of pain in her right wrist and left shoulder. At another point, she turned to her brother — who was riding along in a boat with her — about 19 hours in, and questioned whether she would make it.

“I started breaking down my swims into smaller segments,” Roka said. “But I really didn’t want to fail, and I kept telling myself, ‘Well, you already put in 15 hours and if you fail, you’re going to want to come back and try again.’”

After completing the swim, she said that there are a few more difficult swims she wants to try, including the North Channel swim, which is more dangerous and mentally challenging. Until then, though, she can keep her feet dry and continue training for these grueling challenges.

Is there a reason why she doesn’t wear a wetsuit if the waters are so cold? Would she potentially overheat based on how long it is..?

To be an officially sanctioned channel swim you’re not allowed a wetsuit
https://www.channelswimmingassociation.com/faq

What a superb achievement – Wow!
Talk about “Girl Power” — she is a super-hero [super-heroine?] in my book!!

She is amazing! Wow. Such a huge accomplishment. Fantastic!

Congrats!!!!! What a tough gal, my kids swim distance at the D1 level and i see how hard they work. This makes them look like splash and dash. Soooo proud of your accomplishment