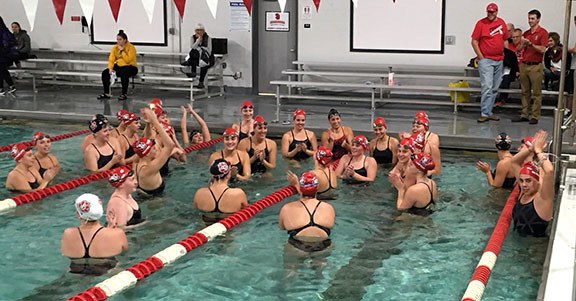 VERMILLION, S.D.—South Dakota junior Sabrina Sabadeanu played a role in three new records and senior Morgan Holt set a new mark of her own during a 194-102 dual meet victory against Minnesota State Friday at the DakotaDome pool. The meet served as the season opener for both programs.

The Coyotes won 14 of the 16 events with Minnesota State all-NSIC sophomore Lily Borgenheimer playing spoiler in both breaststroke events. USD swept the podium in seven events including both dives.

“I thought the team did a nice job tonight,” said USD head coach Jason Mahowald. “It was the first chance with outside competition, and (Minnesota State coach) Nathan (Owens) has a good program. They are young this year and with our 13 freshmen, I thought it was going to be a good test to see which group of freshmen stepped up the most. Our girls did a really nice job.”

Isabelle Davenport, Jordyn Schnell and Meghan Atwell were part of record-breaking relay teams in their collegiate debuts. Davenport was part of the opening 200-meter medley relay team that set a new team record with a time of 1:59.53. Sabadeanu, junior Katie Coleman and senior Hannah Gupton also competed on that relay. Schnell and Atwell swam the middle legs of the 200 free relay, which finished in a record time of 1:49.50. Coleman swam the lead leg and Gupton anchored it.

“Sabrina broke three records tonight, Morgan swam well and both relays set new marks,” said Mahowald. “They are pretty beat up. I think it’s a good indication of how good we can be down the line.”

Also representing the newcomers was Leah Drengenberg, a triathlete for the Coyotes, who won the 800 free and took second in the 400 free in her first collegiate swim meet.

“She hasn’t had a practice with our team yet and she won the 800 free for us tonight,” said Mahowald. “She is swimming three days a week right now with the triathlon team. When we get her at the end of November, she’s going to blow up and be even better.”

“Morgan is a tough kid,” said Mahowald. “When she goes after it, it can spasm on her, but she fights through it.

“I think for her to be that fast this early is excellent. The week we had was pretty tough for them, so to come back and do that on a Friday night during D Days week is impressive.”

All-Summit divers Sarah Schank and Haley Pederson went 1-2 on the 1-meter dives and flip flopped their positions on the 3-meter. Schank’s 1-meter score was 266.30 while Pederson finished with 212.20 points, just ahead of freshman Naomi Bingham who totaled 210.45. On the 3-meter, Pederson won with 271.05 points, Schank totaled 269.90 and freshman Sydney Fulton had the third-highest score with 197.60 points.

“Everyone performed way better than they had before,” said USD diving coach Kris Jorgensen. “Haley and Sarah are both way ahead of where they were at conference last year. Naomi and Sydney had their first experiences today and I think it went well. I am excited for the rest of the year.

The Coyotes are next in action at the Kansas Tri-Duals in Lawrence, Kansas, Oct. 12-13.

ERMILLION, S.D. — Minnesota State won a pair of events Friday evening in its season opener against the University of South Dakota.

Minnesota State also posted second place finishes in both relay events. The quartet of freshman Amanda Jordan, Borgenheimer, freshman Katie Streiff and Knier turned in a time of 2:01.06 in the 200 medley relay event, while the team of Knier, junior Jace Hanson, Jordan and Streiff posted a time of 1:52.33 in the 200 freestyle.

Minnesota State opens its home schedule of Friday, Oct. 12, as it hosts UW-Eau Claire. The dual is scheduled to begin at 5:00 p.m.

It’s a SCM pool, something SS should mention.