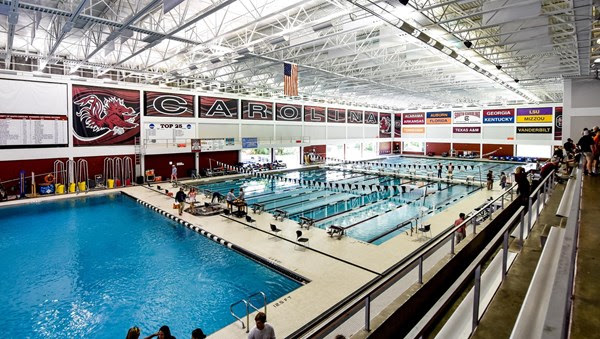 The Gamecocks will host the Tigers on Saturday in their annual breast cancer awareness meet. Stock photo via South Carolina Athletics

­During South Carolina’s last outing, the Gamecock women took down Army’s women while the men’s team suffered a narrow loss. Despite the split results, three individuals on the team earned weekly conference honors for their performances.

Graduate diver Brooke Schultz was named the women’s Diver of the Week after taking down her own school record in the 3-meter dive. Schultz swept the springboards with scores that were enough to qualify her for the NCAA Zone Championships.

Senior Manny Vazquez Bas was named the men’s Co-Diver of the Week for his sweep of the springboards. The San Juan, Puerto Rico, native also earned two Zone qualifying scores and set a new personal best in the 3-meter dive.

On the swimming side, Jose Castro was named the Freshman of the Week after the first meet of his collegiate career. Castro won the 500 free and placed fourth in the 1000 free.

Another notable freshman was Amy Riordan. Riordan won the 200 free by over three seconds and placed third in the 100 free during her collegiate debut.

The Gamecocks will be welcoming the LSU Tigers to the Carolina Natatorium for the first time since 2014. At the 2014 meeting, the results split with the Gamecock men winning 166-134 and the women dropping their dual 131.5-168.5.

This meet will be the Tiger men’s first appearance of the 2022-23 competition season. The Tiger women have earned two wins already this season with strong showings over Tulane and Vanderbilt.

The Tiger’s men’s team is highlighted by fellow Olympic gold medalist Brooks Curry who won his medal for Team USA. Along with his Olympic medal, Curry is a multi-time NCAA Champion and All-American.

The battle between the Gamecocks and Tigers will start at 10 a.m. with pre-meet events beginning at 9:50 a.m. Admission to the meet is free and spectators are encouraged to enter the Natatorium through the doors on the back left of the Blatt PE Center and proceed up the stairs to the natatorium spectator seating.

Has a psych sheet or meet entries been released yet?