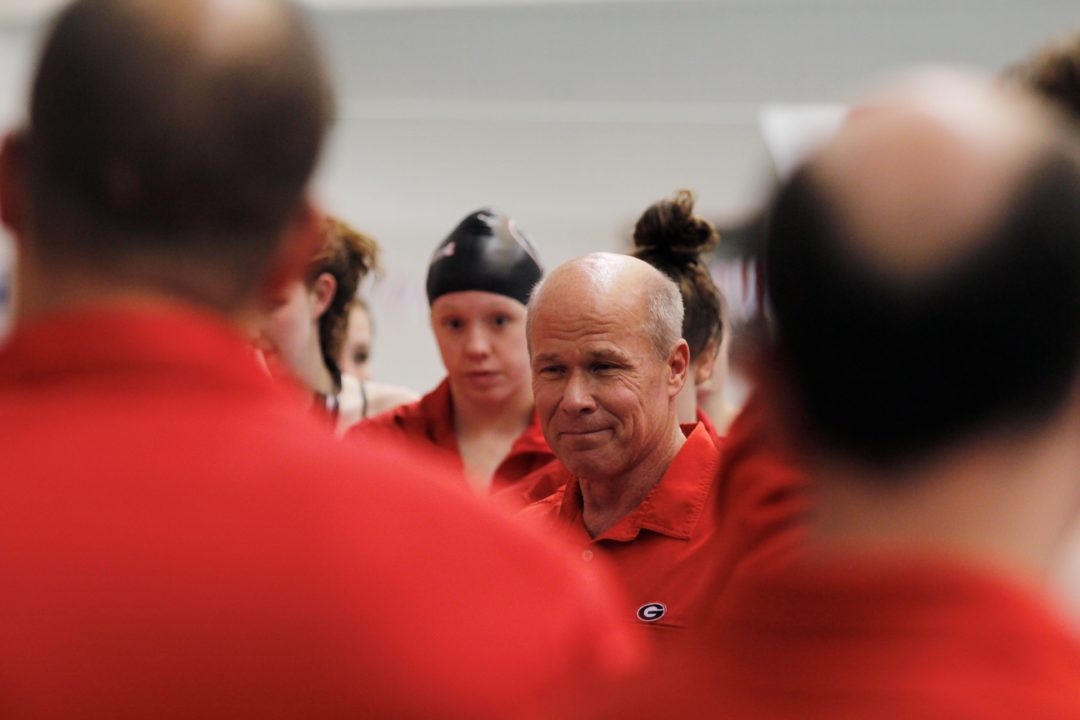 Jack Bauerle's latest star could be Olivia Smoliga, who was a season-best in prelims at the Auburn Invitational. Current photo via Shanda Crowe/shandacrowe.weebly.com

The 2013 Auburn Invitational launched on Friday morning at the James E. Martin Aquatics Center, and Georgia freshman Olivia Smoliga lived up to her hype early.

In prelims of the women’s 50 free, she was a 22.24 for the top seed and her best time as a collegian. She could be even better in finals, but she won’t be swimming alone: lurking behind her is Florida State’s Tiffany Oliver, the defending ACC Champion, after a 22.44, and the defending SEC Champion Chantal van Landeghem, who was a 22.47 for the 3rd seed. Auburn’s Emily Bos isn’t far behind either in 22.57, and the 5th seed belongs to Florida State’s Kaitlyn Dressel in 22.72.

The men’s 50 free was good, though not quite as good as the women’s. Four swimmers were under 20 seconds, led by Florida State senior Paul Murray, who took the top seed in 19.64. Auburn’s Marcelo Chierighini, the odds-on favorite to win this year’s NCAA title, was close behind in 19.75, followed by Auburn post-grad Adam Brown (19.94) and James Disney-May (19.99).

Georgia’s Chase Kalisz took the top seed in the 200 IM in 1:44.63, which is his best time of the season so far. He was dead-even with teammate Ty Stewart at the halfway mark. That’s significant, given that Stewart is a phenomenal butterflier and backstroker, and until this year, Kalisz was neither.

Georgia finished 1-2 in the women’s 200 IM as well, and in fact were 1-4. Melanie Margalis was the top seed in 1:58.40. She dominated sophomore teammate Hali Flickinger (1:58.95) to make the difference in the race, though Flickinger’s impressive closing freestyle split will be enough to make Margalis nervous in finals.

Relays weren’t swum in prelims, but the women’s 200 free relay battle between Georgia and Florida State tonight could be one of the highlights of the meet. After Smoliga’s prelims swim, it seems that the Bulldogs will have the advantage, but don’t underestimate how good Dressel has been on relays.

Watch out, if tonight turns out to be the beginning of the big breakout for “Miss Smoliga”, fanboy Bobo will be on a roll from hereon in til Rio and beyond! 😉 What is up with all these fast prelim times all over the country? And some amazing finals times too, for November. Not sure if anyone keeps those stats, but some of them have got to be November all-time bests, or close to it.

anyone watch prelims this morning? were auburn swimmers wearing briefs/practice suits? if in jammers/fast suits, they are in trouble…not very good!

Miss Smoliga must drop the 100 back and 100 free if she wishes to compete with Cate Campbell on a global level. She wastes her time doing yards swimming

Happy to see you again here on swimswam, big impostor!
I see your remarks are still as interesting as usual.

Bobo, do you have a facebook or something? I would love to see who you are hahah

Sorry. Another English error! it’s without!

omg, we have a GOGO.

i love it. every response has to be “(X amazing swimmer) must only watch youtube videos of 50’s and 100’s and only in LCM if they are to ever be successful on the world stage. any katy perry video or vignette of cat videos will instantly sour their training”.

😉 i kid and am jealous you have an impostor, BOBO!

It’s probably his ‘Belgium’ nemesis. They used to go back and forth between border lines. Regardless, imitation is the sincerest form of flattery. Maybe I’ll start a HoBo GiGo twitter account…