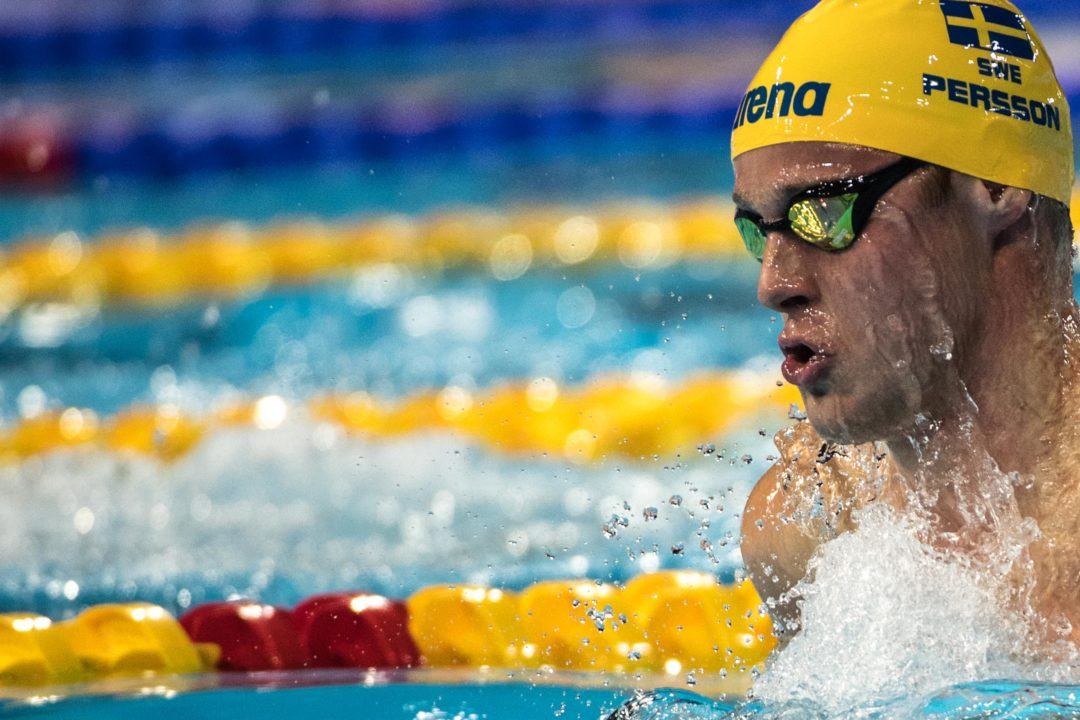 Erik Persson took down another Swedish record tonight, this time in the 100 breast. Archive photo via Mike Lewis/Ola Vista Photography

Tonight was big for Sweden, as Sarah Sjöström had a huge swim in the 100 fly. Going 56.26, she claimed the top spot in the world rankings this year. You can read more about that swim here.

The Swedes were far from done, though, claiming two other individual wins tonight. In the 50 breast, Jennie Johansson was the only woman sub-31 with a 30.57 to win over her countrymate Sophie Hansson (31.41). Rikke Moller Pedersen of Denmark settled for third (31.45). Michelle Coleman earned the win in the 100 back, going 1:00.28 to knock off Katinka Hosszu (1:00.59).

Hosszu, known for taking on outrageous event schedules that often include multiple back-to-back swims, really loaded up today. She swam all four women’s events, making the A final in each of them except for the 50 breast, where she was just 28th in prelims. Hosszu finished off the podium in the 100 fly, but in addition to her 2nd place swim in the 100 back, she won the 400 IM. The time, 4:40.90, is pedestrian for the world record holder, but she did win the event by over ten seconds. It looks like she’s going for podium finishes, not necessarily big times, at this meet.

Poland’s Wojciech Wojdak took a comfortable win in the men’s 1500 free, going 14:54.07 to finish well ahead of Norway’s Henrik Christiansen (14:59.56). Wojdak’s time puts him at #3 in the world this year, behind only Italians Gregorio Paltrinieri and Gabriele Detti.

The old Swedish record in 100 br was actually 1.00.66 set in prelims by Skagius yesterday.

In the heats this morning (Monday). Sarah posted a 24.01 in the 50 m freestyle. World record tonight?