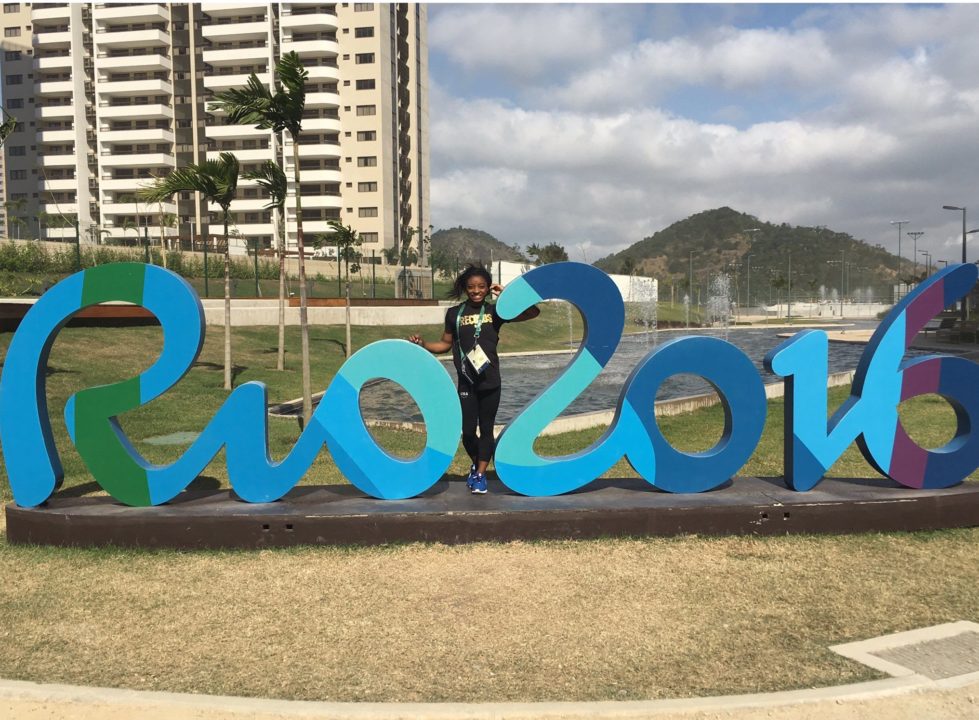 A battle of young Olympic stars came down to just 11 votes, with gymnast Simone Biles eking out the Associated Press's Athlete of the Year award over Katie Ledecky. Archive photo via Simone Biles Twitter

A battle of young Olympic stars came down to just 11 votes, with gymnast Simone Biles eking out the Associated Press’s Athlete of the Year award over Katie Ledecky.

Biles won four gold medals in Rio, tying the record for American female gymnasts at a single Olympics. She’s also the most decorated gymnast in American history after winning 4 golds and a bronze in Rio. At 19, Biles was the face of the gold medal-winning American gymnastics team and one of the overall faces of American Olympic coverage.

Ledecky, also 19, was one of the other key pieces in 2016 Olympic coverage. Her 4 golds and a silver medal included an incredibly rare sweep of the 200, 400 and 800 freestyles in Olympic competition. Ledecky also helped the dominant American 4×200 free relay take gold, and showed off her impressive range with a key split on the 4×100 free relay that took silver.

In some ways, Ledecky was hurt by the overall popularity of her sport. As dominant as Ledecky was on the women’s side, she had to compete with Michael Phelps‘ farewell tour, Katinka Hosszu‘s Olympic breakthrough, Ryan Lochte‘s in- and out-of-pool charisma as well as world records from Adam Peaty, Sarah Sjostrom, the Australian 4×100 free relay and Ryan Murphy just to get coverage within her own sport. Biles was the face of a 5-person American gymnastics team that became media darlings, and as such, was launched a bit higher into the public eye during Rio.

Biles earned 31 of 59 total votes for the award, with Ledecky taking 20. The other votes went to tennis player Serena Williams (4) and basketball player Breanna Stewart (4).

The AP will announce the Male Athlete of the Year tomorrow.

Can someone who is familiar with gymnastics tell me how well Simone Biles’ accomplishment’s this year compare to Ledecky’s? Ledecky is so dominant it’s hard to imagine any other female athletes can be compared.

It’s impossible to make a direct comparison, since gymnastics is a judged sport. However, a possible (but certainly flawed) analogy to swimming, using Olympic events, is as follows: – Team gold 4×200 freestyle relay (or, more like a 3×200 IM relay swum by five team members) – Individual all-around gold 200 IM – Floor exercise gold 100 free – Vault gold 100 back (floor and vault are both power events even though they are completely different, and free and back are both long-axis strokes) – Balance beam bronze 100 fly (there are some similar moves between floor and beam, and the fly/free combo is common in swimmers) – Uneven bars no medal 3rd place at Olympic Trials in 100 breast… Read more »

Biles is pretty much considered the GOAT of gymnastics. Can’t really argue her winning it.

Gymnasts Nadia Comaneci and Larisa Latynina might argue the female gymnastics GOAT point with you. Latynina won 6 medals in each of three Olympics and nine gold overal; one of the primary reasons cited for Phelps swimming in London was to surpass her medal count of 18. Biles did not even win all of her individual events in Rio. Ledecky did, and with regard to objective performance metrics was the first Team USA female athlete in ANY sport ever to win four Gold medals and a silver medal in a single Olympics.

Good point. They were much more concerned with Lochte peeing outside before an armed extortion attempt.

Ledecky only does freestyle , few can recognise her outside of the pool , she has no outstanding family dynamics , she is well educated in good schools , dutiful , scholastic , comes from white privileged DC environs . Simone is a dynamo who has overcome obstacles to push herself to the top in a very skill specific sport , is not white , is adhd , was in foster care , drug& alcohol afflicted bilogical mother , no apparent biological father . Simone was home schooled yet got into UCLA . Her ( grand) parents built a magnificent gym in Texas & girls are streaming in . Both won 4 golds & a minor medal but Simone medalled… Read more »

What everything you listed of hard childhood of Simone has to do with the sport achievements in the year of 2016? If the hardship of life is one of the selection criteria then sure Simone has huge lead over Katie. At this Olympic Games Katie Ledecky swam 5 races and all of them with personal bests. Two of these bests were world records that will stay for decades. She won the epic race against Sarah Sjostrom were they showed second and third all-time results. How tough was competition in gymnastics this year? In addition to huge dominance Katie demonstrated incredible versatility. How many swimmers in history of Olympic Games medalled from 100m through 800m distances? The only problem of Katie… Read more »

I don’t know why you argue . I set it out some of the contributing factors that made Simone’s story in 2016 more compelling & the fact is Simone won 31:20 . Turning sheer adversity ( her biological mother was drug addicted & Iirc even arrested whilst pregnant with Simone ) has major ramifications . One is her size which is only 4’9 highly likely compromised by in utero distress/ denial of nutrients . That she became so strong & co ordinated physically though possibly mentally affected ( adhd) gives hope for thousands of kids . No they won’t be Simone but such things as foetal alcohol distress syndrome might be able to be lessened. On the other hand I… Read more »

“Everything falls into place like manna from heaven.” I’m sure those insane workouts/work ethic had absolutely nothing to do with Ledecky’s success. Wow.

It is a concept I have that some people are on their later life cyce eg one of those annoyi g 9-10th ppl l & everything just fits ..That’s Ledecky & what makes her training so effective is the multiple advantages she already has in life plus a unique gift of non – injury . Most of us are struggling down the chain .like Bo Derek was a 10 & at that age I’d have been an 8.5 . I am a numbers person – it comes from counting laps . I fully appreciate that some ppl are up there .Talentwise in swimmi g I was only a 4 but looking good in swimmers I aimed for the 10 .… Read more »

G.I.N.A I don’t argue but we are definitely talking about different kind of awards and recognition. BTW I am almost sure that Simone doesn’t want people to bring the issues of her birth to the discussion of her sport achievements. She doesn’t need and doesn’t want to be awarded out of pity.
Same about another Simone. She first of all wants to be treated as and exceptional sprinter who won Olympic medal, but not the first black female who succeeded at Olympic Games in swimming. The race issue was brought up by media right a way and made her confused at first.

Simone Manuel is not the first black female who succeeded at Olympics Games in swimming.

Hate to break it to you, G.I.N.A., but the mom’s responsible for their babies having fetal alcohol distress syndrome typically aren’t keeping up with Year.

…keeping up with Olympic gymnastics or AP female athlete of the year.

No but grandmothers & other relatives who inherit these children as Simone’s grandfather ( & wife plus his brother who adopted the other kids) are overwhelmed by the task . A little bit of encouragement down the line to say it is not always hopeless might help. Ive done it for Down & autistic kids new caregivers & they at least smiled .to hear it & later took the actions I had recommended. They have hope .

I accept Lede ky is blessed by the gods so what is your problem?

🙂 “Don’t hate me because I am beautiful” 🙂 G.I.N.A what manna are you talking about? Does Ledecky have a special water in her community or school or club pool or she has a golden (instead of black) line on the bottom of her training pool or she has a special diet that is not affordable to the family with smaller income or she has special coaching and training environment that is not available to any other girl that shows high level results. Seriously, what did you mean by saying that. About her level of influence on young generation and the entire swimming community you are also well behind the reality. And we are not talking about career life achieved… Read more »

Tank you for helping me to clarify the fact that being an elite swimmer from 100 through 1500 is an exclusively rare fit that just only by itself deserves to be recognized as outstanding athletic achievement. Can you imagine Usain Bolt winning something at 800 or the winner of 1500 to win medal at 4×100 relay?

No wonder she won.

She’d probably be good at swimming then. She could just run across the pool and beat everyone.

She’s arguably the greatest gymnast of all time – this from people in the sport. Her accomplishments this year rank with Katie Ledecky’s accomplishments – both were in the realm that knowledgeable people (peers, coaches, etc.) can only watch and shake their heads. I think the nod went to gymnastics being just a bit more popular with the rank and file than swimming.

Go back and watch what Simone Biles did at the Olympics. Compare her routines to everyone coming before and after. It’s…astounding.

“Can someone who is familiar with gymnastics tell me how well Simone Biles’ accomplishment’s this year compare to Ledecky’s?”
Biles: by land and air.
Ledecky: by sea.

Should mention Douglas won at 2012…I wonder where Missy was at 2012…
I don’t think it is because Ledecky hurt by swimming’s popularity, their amateur status and how much the media cover them(Final Five was all over the place) are the main reason.