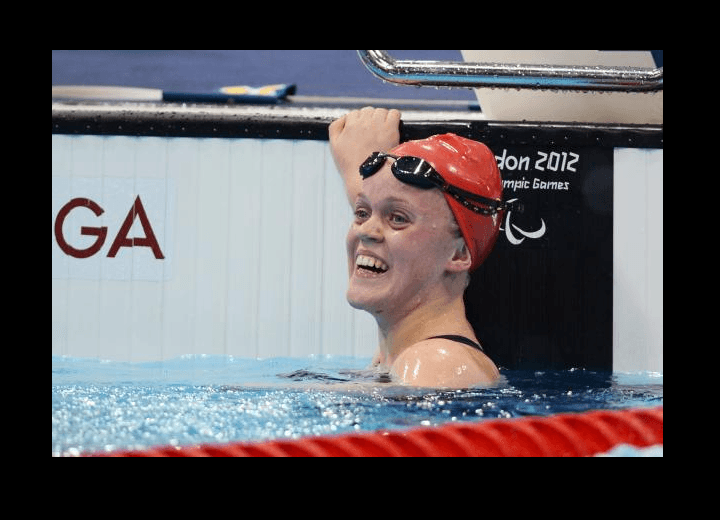 After an epic showdown with American Victoria Arlen on Saturday in the 400 free, British Paralympic superstar Ellie Simmonds was swimming alone on Monday in the women’s SM6 200 IM on day 5 of the 2012 Paralympic swimming competition.

Simmonds dominated this race on the back-half; her and teammate Natalie Jones were in a dead-heat at the halfway mark, but an outstanding breaststroke leg for Simmonds carried her to a 3:05.39, nine-second win and a new World Record. The swim knocked nearly three seconds off of her old World Record set in this same pool at the Paralympic Trials in March.

In the men’s version of the same race, China’s Qing Xu broke the World Record by an even larger margin, with a 2:38.62. The Chinese were the story of the day on Monday: after slowing down their herculean pace from the first two days of this meet, they roared back with 5 event championships on the day.

In one of the more anticipated events of the race, South Africa’s Charles Bouwer has his chance at the men’s S13 100 backstroke today. After swimming so well throughout the meet, it seemed like this, his best race, was going to be his to lose. He did go a best time and a new African Record in 59.92, but he was still smoked by Belarus’ Ihar Boki. Boki knocked two seconds off of the old global mark with a 56.97.

Australia’s Jacqueline Freney, without Mallory Weggemann to challenge her, is dominating the women’s S7 class. She took her 4th event win on Monday, with a win in the women’s 100 freestyle in 1:09.39: a new Paralympic Record. She topped American Cortney Jordan, who earned a silver in 1:11.63.

And finally, in the first women’s relay of the meet, the women’s 34-point 400 free relay, the Australian women won in a new World Record of 4:20.39, running away from the runner-up American relay of Susan Beth Scott, Victoria Arlen, Jessica Long, and Anna Eames.

The Aussies used a very different strategy in constructing their relay than did the Americans; they used an S7, S8, S9, and S10, whereas the Americans, with the luxury of a superstar Victoria Arlen in the S10 class, were able to use a pair of S10’s – generally the fastest classification. No matter, the Aussies were able to dominate the race regardless. That was thanks to a fantastic leadoff of 1:03.0 from S9 swimmer Ellie Cole.

With their day 5 output, the Chinese remained in firm control of both the overall medal standings, as well as the gold medal standings. The Australians continue to have a banner year, and their 9 golds are already as much as they won in the entire 2008 meet, and they’re still just halfway through.