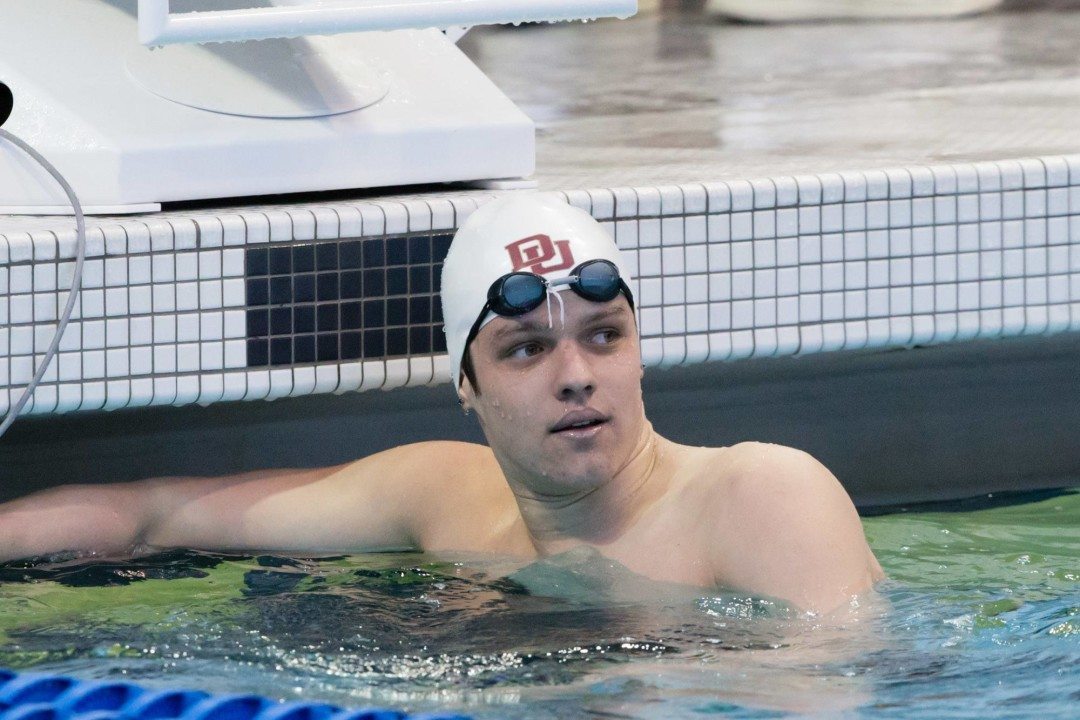 Both the Sun Devils and the school’s pro group posted numerous lifetime bests at the one-day intrasquad that doubled as the program’s senior day.

Denver and Air Force faced off in a sprint style dual meet with a shootout 50s on Saturday, January 27th, at Schlessman Natatorium on the campus of Colorado College in Colorado Springs. The meet featured the 200 medely relay, 200 free relay, 200 free, 500 free, and 200 IM, as well as a 3 round shootout for each of the stroke 50s. Denver won all but 1 event, and broke the pool record in all events but the 50s.

Denver’s men kicked off the meet with a speedy 200 medley relay, coming in less than 2 seconds off their best time this season. Sid Farber split a 19.32 to anchor the relay, touching in 1:28.57. That comes in not that far off their Summit League-leading 1:26.82, just 2 and a half weeks away from the conference meet.

COLORADO SPRINGS, Colo. – The University of Denver men’s and women’s swimming and diving programs combined to win all but one event en-route to defeating Air Force in a sprint dual on Saturday at Schlessman Natatorium on the campus of Colorado College.

The relays were followed up by the 200 free. Sophomore Andi Johnston (Fort Collins, Colo.), freshman Aysia Leckie (Georgetown, Ontario) and senior Maddie Myers (Arvada, Colo.) swept the podium in the women’s race. Johnston touched the final wall in 1:50.14, Leckie clocked in at 1:51.82 and the reigning Summit League Women’s Swimmer of the Week Myers finished in 1:51.93.

Following the sprint semifinals, Gilbert and senior Alex Walton (Boulder, Colo.) took 1-2 in the men’s 500 free. Gilbert out-swam his teammate with a 4:31.64, a few seconds ahead of Walton’s 4:35.55 in the lone men’s distance race of the afternoon.

The sprint finals followed the men’s 500. Calkins earned Denver’s first sprint victory with his 21.51 in the men’s 50 fly. Webster finished behind the redshirt-freshman with a 21.72.

Denver swept the two 50 yard backstroke events with McCormick winning the women’s race in 25.68 and Loncar taking the men’s race with a 22.20. Moden finished second in the women’s 50 back with a 25.99.

In the final two sprints of the night Denver combined for six spots of the top four of both freestyle events. Senior Morgan Wice-Roslin (Colorado Springs, Colo.) led a trio of DU women’s swimmers in the 50 free, taking the event tile with a 22.69. McCormick finished third in 23.32 and Moden clocked in at 23.44 to finish fourth.

On the men’s side, Farber out-swam Calkins for the event tile as the two sprinters finished in 19.80 and 20.27, respectively. Freshman Cameron Auchinachie (Binghamton, N.Y.) touched fourth in the 50 free finals with a 20.42.

The dual meet wrapped up with the 200 free relays. Denver’s freestyle sprinters combined to win both events. Moden, Wice-Roslin, McCormick and Bradley combined for a 1:33.25 on the women’s side, while Farber, Auchinachie, Calkins and Loncar won the men’s race in 1:19.78.

Outside of the sprint races, Denver’s times were good enough for pool records in every other event.

UP NEXT: Denver’s divers head to Air Force Feb. 2-3 (9 a.m. MT) before both swimming and diving programs head to the Summit League Championships in Sioux Falls, S.D. Feb. 14-17.

The University of Denver is holding an alumni giving challenge for the 2017-2018 season in an effort to increase student-athlete alumni participation in the Denver Athletics Annual Fund. The sport with the highest percentage of alumni participation will receive an additional $10,000 of support through the generosity of an anonymous donor. Alumni can make a gift online, by calling 303-871-2388 during normal business hours or by sending a check to:

COLORADO SPRINGS, Colo. – The Air Force men’s swimming and diving concluded their regular season competition on Saturday, Jan. 27, with a 227-89 loss against Denver in the annual Colorado Sprint Championship held at Colorado College’s Schlessman Natatorium. The unique format of this sprint elimination meet consists of three 50’s of each stroke being swam to eventually whittle the field down to the four fastest swimmers. Before, in between, and after each round, the 200 medley relay, 200 free, 500 free, 200 IM, and 200 free relay are also swam.

Opening the meet with the 200 medley relay, AFA `A’ placed third and was made up of Cole McAnany, Derek Brecht, Joey Gebhart and Michael Hannigan (1:30.38). AFA `B’ relay was fourth in a time of 1:32.58 (Daniel Keith, Zach Nelson, Jack Ayres, and Lars Knutson) and AFA `C’ relay was fifth in 1:35.91 (Ben Settle, Andrew Weiss, Kyle Bundesmann, and Thomas Durocher).

As far as determining the four fastest swimmers in each stroke, Steffen Mount held on for a third-place finish in the 50 butterfly (22.04) in his third and final round. The 50 backstroke finals contained McAnany (22.34) for second and Gebhart (22.92) rounding out the top four. Nelson earned second in the 50 breast in 26.01, Brendan Richichi was third in 26.34, and Brecht took a close fourth in 26.49. In the final round of the 50 freestyle, Mount was third in 20.31.

The Falcons ended the meet with a second-place finish in the 200 freestyle `A’ relay consisting of Mount, McAnany, Knutson, and Hannigan, missing a new school record by half a second (1:20.00). Placing fourth was AFA `B’ relay with Gebhart, Orr, Keith, and Ayers, who swam the race in 1:25.49.

“Despite the score, we competed really well today,” according to head coach Rob Clayton. “Denver is an outstanding team and with all the races tight, we came out on the short end today. Overall, it was a step forward for us. We need to work on racing details as we head into our taper and we will sharpen ourselves in preparation for WAC.”

The men will spend the next three weeks at home to prepare to defend their title for a third time at the 2018 Western Athletic Championships in Houston, Texas from February 21-24.