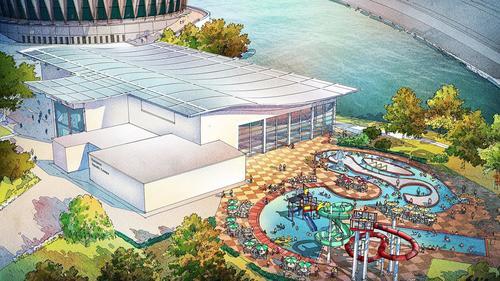 SwimSwam welcomes reader submissions about all topics aquatic, and if it’s well-written and well-thought, we might just post it under... Current photo via Daily Press (Handout)

Nate Tschohl’s ties in Virginia swimming run deep. He swam at Old Dominion University from 2002-2006, went on to become the senior head coach at the Tidewater Aquatic Club in Hampton Roads, and returned to Old Dominion as an assistant coach from 2006-2011. Now, Nate is the entrepreneur behind the Swimnerd company. You can learn more about their projects at www.swimpractice.com and http://internationalwatersafetyday.org/

I went to Kecoughtan High School in Hampton last night to attend the discussion of building a $30M+ aquatics facility. No, I’m not from Hampton. I’m from Virginia Beach.

And, to be fair, I have limited knowledge on the city’s economic situation other than what I learned yesterday.

But, here is what I do know…

Studies show that learning to swim at an early age provides kids with a massive head start in life. On average, children that learn to swim are 10 months ahead cognitively than their non-swimming cohorts as well as 15 months ahead socially and emotionally.

Nearly 50% of Hampton’s population is black.

The average family income in Hampton is $46,110. The average income of a USA Swimming family, the families you will be inviting into your economy, is $125,000.

Most of Hampton is surrounded by the Chesapeake Bay, the largest estuary in America.

If you don’t know how to swim, would you be keen on learning more about marine biology? Oystering? Ship building? Boating? Eco-tourism? Fishing? Climate change?

If you were to join the Coast Guard or the Navy, would you need to know how to swim?

Christopher Newport knew how to swim.

And all he did was establish the first settlement in the New World, negotiate a peace deal with Chief Powhatan, and provide the colonists with supplies by sailing across the Atlantic 4 different times.

Want to provide the youth of Hampton with a head start? Want to create and develop leaders?

Then teach them to swim. All of them.

This area has produced many Division 1 swimmers as well. It’s a struggle for the USA Swimming year round teams to find adequate pool time. The city facility in Newport News is expensive and usually unwilling to allow the teams to use the facility like they need to. Teams are left scrambling every year for practice space and time. A facility like this would be awesome but I just don’t know if it could ever come to be.

From what I understood at the ASCA clinic this year, space and time is an issue for the majority of clubs around the country. USA swimming has grown from 200k members in 2000 to 330k members now. If the organization wants growth to continue it might be wise to begin to formulate some initiatives to put in place to help facilitate the growth of the sport and the organization. I lived in NN for a few years (and coached) about ten years ago and couldn’t believe that the Midtown facility had just been built as there weren’t any other facilities around the immediate area to house the some large and very successful programs of the peninsula. It’s great that there… Read more »

What a waste of money. If an athlete is that serious about their swimming they convince their parents to take a loan out or some type of financial aid and go to Bolles School or pinecrest. The city of Hampton needs to invest in there school. That city has a serious crime problem. Get more police and pay them well.

Apparently they need to invest more into “their” academics and education system as well.