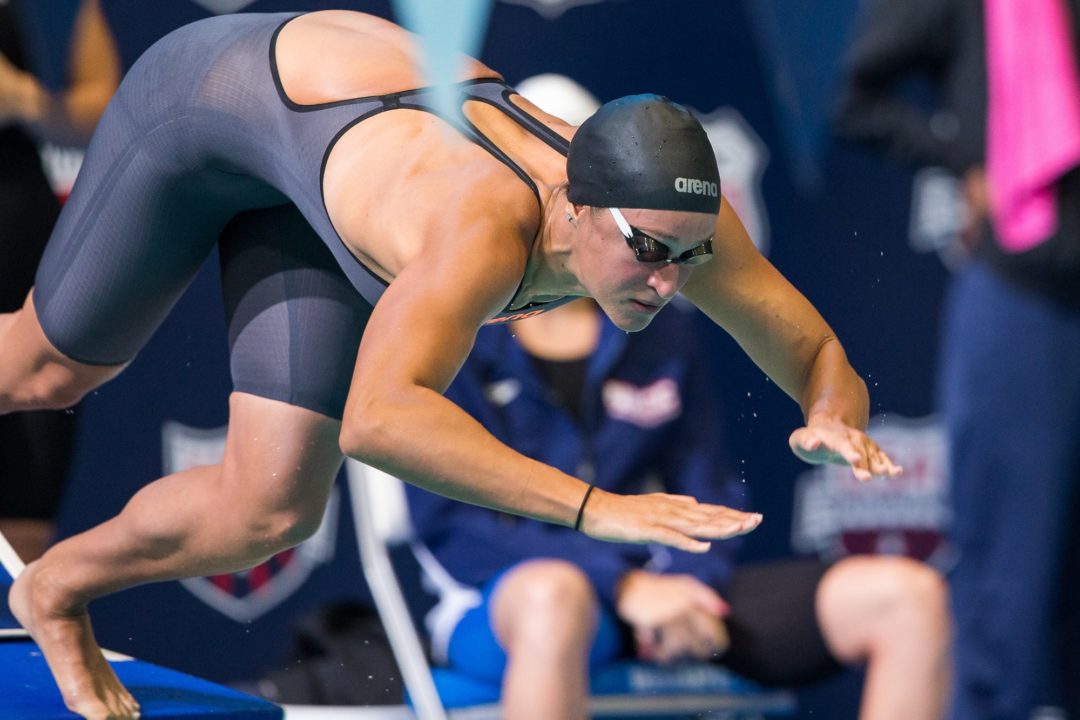 Should USA Swimming consider athletes who traditionally perform better in relays than they do in their individual events? Megan Romano went 52.90 in the 4x100 freestyle relay at the World University Games, her time is 1.55 seconds faster than her time in the individual 100 freestyle. (Photo Credit: Tim Binning, TheSwimPictures)

In light of Megan Romano’s 100 freestyle relay split at the World University Games, you have to wonder if USA Swimming is choosing the best relays possible. Romano split a 52.90 while anchoring the 4×100 freestyle relay, almost running down the Russians to finish second. Today, she split a 54.45 to finish third in the 100 meter freestyle. Her reaction time was .71 in the individual event. Her reaction time in the relay was .18, which means her relay swim was over a second faster than her individual swim, if you only look at time in the water.

Last year in London, the women’s 4×100 freestyle relay finished third. The fastest split in the women’s 4×100 freestyle relay was from Missy Franklin. Missy led off in 53.52. The relay finished third; they were .45 behind the Netherlands and 1.09 behind Australia. If Romano would have had the fourth spot on that relay, and done the same time, they would have been .75 faster, and only .34 behind Australia. Only two women split under 53 seconds in that event last summer at the Olympics.

There are several athletes who perform better in relays than they do in their individual events. Is there a way that relay performance can be considered when selecting the international teams? Romano did not make the Olympic team last summer, but with a 52.90 relay split, the relay would have been significantly faster, and USA would have received the silver medal. There are several other swimmers who also perform better in relays. Romano has similar time spreads during the NCAA season between relays and individual events.

Megan Romano is swimming at the World University Games as well as the World Championships in Barcelona. She qualified as an alternate in the 4×100 freestyle relay.

Do you like the relay selection process that USA Swimming uses right now, or do you think it is time to revise the process? Let us know what you think.

You mean like having Lochte anchor the men’s 4X100? There is no reason to assume that Romano would have swum that time last year, nor any particular reason to assume that she will always swim that much faster on relays. All the same, a swimmer can produce a deep enough body of work to where you can rely on them as a “relay star”. Think Jenny Thompson. And who could have predicted Lezak’s anchor leg? Nobody, but you did know if anyone could do it, he could. But that was based on swims over multiple meets and several years. One outstanding split does not a career as a relay star make, I’m afraid.

I agree. what is great about our sport is that it is objective. The fastest time wins! or gets on the relay. you don’t want coaches making subjective decisions and then you end causing all kinds of problems.

Please don’t bring back the memories of Lochte anchoring that 4×100 last year:)

It is imperfect, but it is “fair.” Unless someone can come up with a concrete version of “if you do X then you swim in the relay over someone who beat you in a race,” I don’t see this changing. It also opens up the rosters to be more than 26 per side if relay only swimmers are taken. Not sure if that actually matters or if it will just require a larger budget.

I think the idea sounds good, but I don’t know how it could be done in reality and still maintain any objectivity. It would just be opening a huge can of worms.