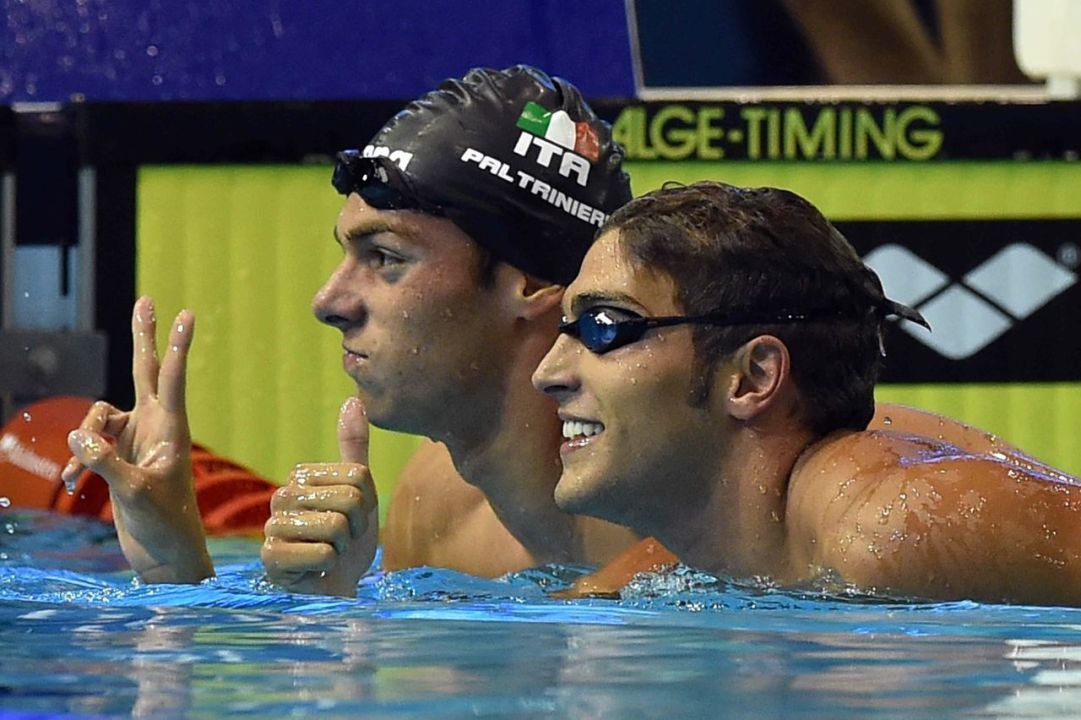 Several stars will be competing in the Settecolli Trophy including Italians Gregorio Paltrinieri and Gabriele Detti who rank first and third in the world in the men's 1500 freestyle... Current photo via Arena International

Canadian Kylie Masse took the women’s 50 backstroke in a time of 27.82. She failed to match her prelim time of 27.67, which is a competition record. Masse, who set the 100 backstroke Canadian record at the Olympic Trials, also set a new Canadian record in the morning beating Brooklyn Snodgrass‘ record of 27.97, which she posted at the 2014 Commonwealth Games.

Katarina Listopadovà of Slovakia finished second in a time of 28.23. Listopadovà’s time is also a national record beating her own mark of 28.55, which she put up at this year’s European Championships.

Italian Elena Gemo finished third in a time of 28.40.

Coralie Balmy of France took the women’s 400 freestyle in a time of 4:03.66. Balmy, who led the race from start to finish, improved on her season’s best of 4:04.39 moving her placing in the world ranking from eighth to fourth. European Championships star Hungarian Boglarka Kapas finished second in a time of 4:05.65 followed by Italian Diletta Carli who touched in a time of 4:07.32.

Italian Gabriele Detti dominated the men’s 400 freestyle finishing over six seconds ahead of the field. Detti finished in a time of 3:44.21 breaking the meet record of 3:44.71 set by Ian Thorpe in 2001. He was not able to match his season’s best of 3:43.97, which he posted at the Italian National Championships and currently ranks fourth in the world.

2012 Olympic champion Ruta Meilutyte took the women’s 100 breaststroke in a time of 1:06.15. The Lithuanian was not far off her season’s best of 1:05.82, which currently ranks third in the world. Melutyte was followed by Italian Arianna Castiglioni who finished in a time of 1:07.15 and Kanako Watanabe of Japan and Jennie Johansson of Sweden who tied both touching in a time of 1:07.35.

Meilutyte’s Lithuanian teammate Giedrius Titenis won the men’s 100 breaststroke and in the process set the second meet record of the evening. Titenis took the event in a time of 59.63 beating his own record of 59.72, which he recorded last year.

Italian Lorenzo Antonelli finished second in a time of 1:00.77 followed by German Christian vom Lehn and Nicolo Martinenghi who tied with a time of 1:00.87.

A Hungarian collected gold in the second straight final as Laszlo Cseh picked up the win in the men’s 100 butterfly. Cseh finished in a time of 52.21. He was followed by teammate Adam Telegdy who hit the wall in 52.74 and Adam Barrett who touched in a time of 52.91.

Ranomi Kromowidjojo of the Netherlands took the women’s 50 freestyle in a time of 24.28. Kromowidjojo was not far off her season’s best of 24.07 and even closer to her meet record of 24.21, which she set in 2012. The time she posted at the European Championships currently sits second in the world rankings.

Canadian Chantal van Landeghem finished second in a time of 24.71 followed by Therese Alshammar of Sweden who recorded a time of 24.75.