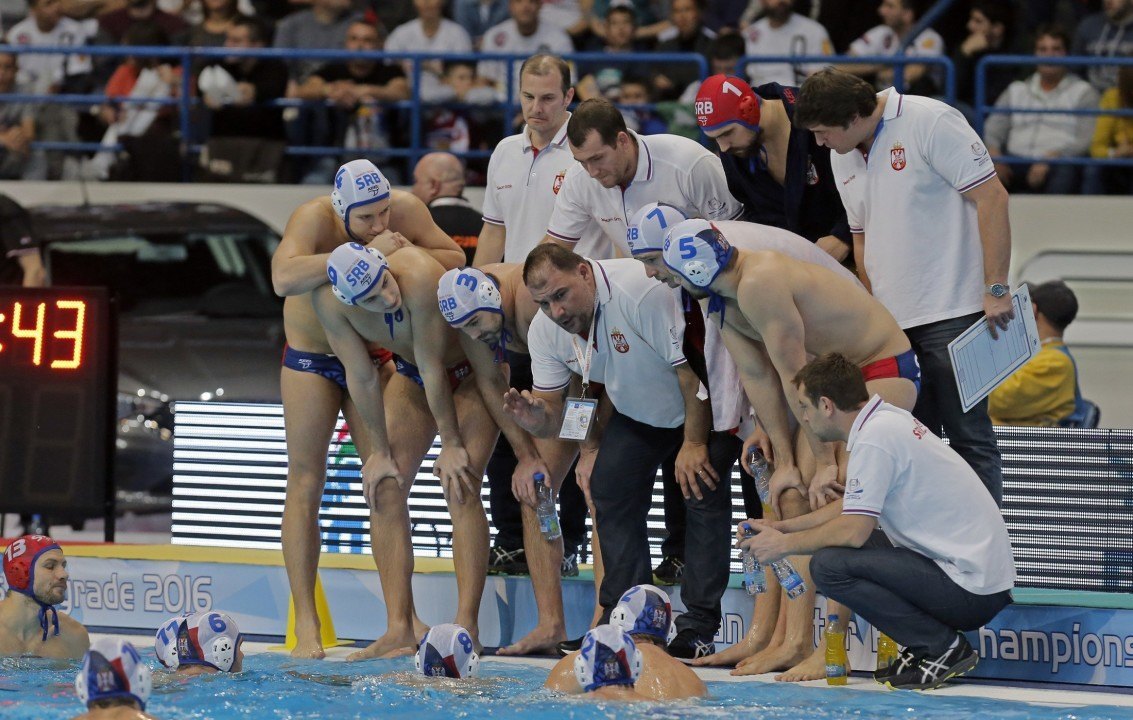 Serbia moved on to the semifinals in the men's water polo tournament with a 10-7 win over Spain on Tuesday. Archive photo via Dusan Zivkovic/Belgrade2016

While Spain emerged from pool play as one of the two top seeds, it was Serbia who dominated in the quarterfinals on Tuesday. Filip Filipovic opened the score with a long-distance shot with 5:12 left in the quarter. Spain’s Alberto Munarriz Egana tied the score less than a minute later, but Dusan Mandic scored twice in the final minutes to put Serbia up 3-1 heading into the second period. Milos Cuk netted one early in the second for 4-1, then Guillermo Molina Rios racked up two goals for Spain in just over a minute. The Spaniards were unable to capitalize on that momentum, and Serbia added another three goals from Mandic, Stefan Mitrovic, and Milan Aleksic, and the team went off at halftime with the score stopped at 7-3 in favor of Serbia.

Spain added two in the third quarter and, more importantly, held Serbia scoreless. Molina Rios scored with 6:52 left to play, while Munarriz Egana made it 7-5 with 4:50 on the clock. The fourth period began with a Mitrovic shot that found its way into the net. That was followed by a goal for Spain signed Balasz Sziranyi Somogyi. Filipovic put Serbia back up by three, 9-6, with 5:52 left in the quarter. A power play goal from Spain’s Marc Minguell Alferez narrowed Serbia’s lead to 9-7. Minguell Alferez took another shot in a man-up situation with :48 left but it was blocked by Serbian goalkeeper Branislav Mitrovic. Mandic connected once more in the final seconds of the game and Serbia advanced with a 10-7 win.

Filip Filipovic stated: “Sometimes you have to touch the bottom so you can see how to rise. I think after the Brazil game we literally touched the bottom of the pool, the green pool. I think the changing of the venue was a good change for us. After we lost to Brazil we didn’t have many options. We needed to win and win until the end of the Olympics and that’s our goal.
“This was definitely our best performance of this tournament. We didn’t allow Spain to score early, which would have forced us to chase the game. I’m very proud of my teammates. We made a promise back in Serbia that we would fight for a medal.”

Spain’s head coach, Gabriel Hernandez, told the press: “Serbia was the worst team we could play against in the quarterfinals. They have won everything in the past few years. We knew we would have to play at our very best to beat them but we weren’t able to do that. We lost many individual battles and it was a struggle to keep possession of the ball.
“There were many factors that went against us today, such as our right side, which was bad today. We also didn’t start well in defence and this caused us many problems. We just weren’t good enough and when you play a team of that calibre it was always going to be difficult. We hoped to play for a medal but now we will play for our dignity in the classification matches.”

Serbia I think is what the title is supposed to say