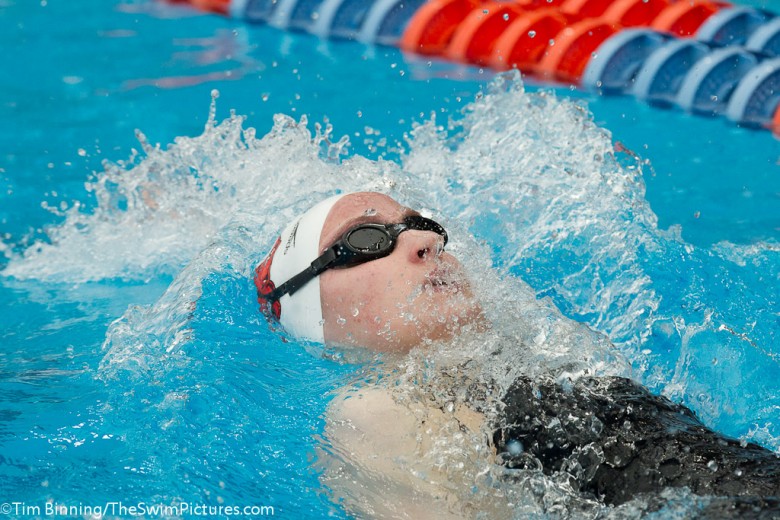 Julia Kucherich and Arkansas kicked off their season by winning their own relay meet, but SMU stole some headlines thanks to a new addition to their roster. (Photo Courtesy: ©Tim Binning/TheSwimPictures.com)

This week, the powerful SEC warmed-up for next weekend where we will see the beginning of some head-to-head explosions, including Brett Hawke’s Auburn Tigers against Dennis Pursley’s Alabama Crimson Tide.

Swimmer of the Week honors go to Alabama’s Shana Lim for some impressive backstroke swims at the Arkansas relays, and BJ Hornikel of Alabama for his top-4 early-season 100 free swim against Delta State.

Arkansas won the first ever Razorback Relays meet, kicking off Sean Schimmel’s tenure in Fayeteville. Schimmel came to UA after guiding the Maryland Terrapins through their final few seasons of existent before the program was unceremoniously dropped this season.

The meet included Arkansas as the champions, a fast-rising North Texas team as runners-up, and a squad from SMU finishing 3rd.

Among the highlights for the Razorbacks was their win in the 300 butterfly relay, where sophomore Susanna White split a phenomenal early-season 55.30 on the relay’s 2nd leg. If she continues to develop, she will prove as an admirable replacement for the graduated school record holder Katie Whitbeck.

In the second event of the day, the 300 backstroke relay, Arkansas’ Shana Lim (55.48) and SMU’s Isabella Arcila (55.38) both got their teams off to a great start, with times that are among the best reported in the country so far (and within a second of national leader and Olympian Rachel Bootsma). Lim would swim a 55.1 later in the 400 medley relay, which Arkansas also won. On the second leg, however, it was Arkansas’ prized freshman Anna Mayfield who put some serious separation into this race, splitting a 53.48 (albeit with a dive off of the block – so it’s hard to judge what that means on a flat-start aside from “fast”). The Razorbacks would eventually win by over five seconds.

SMU would fight back by winning the first traditional relay event, the women’s 800 free relay, including a nice surprise addition to their lineup this year: Nathalie Lindborg. The Swede (who led off here in 1:51.08) swam for Cal as a freshman in the 2010-2011 season, and was projected to be their next huge freestyler. Last year, she disappeared, but now has re-emerged in Dallas swimming for the Mustangs. That could be a huge boost to them, as combined with Nina Rangelova (who anchored here in 1:48.6), SMU will have two big free relay pieces ready for this season as they look to defend their 16th-place finish from NCAA’s last year.

One final standout freshman performance for Arkansas came in the 3×500 free relay. There, freshman Anna Mayfield, on the Razorbacks’ B-squad, led off in a 4:54.12. For the first-year swimmer out of San Antonio, that’s already within 5 seconds of her personal best.

So far, it looks like Schimmel, thanks in part to a great recruiting class by outgoing coach Jeff Poppell, has things headed in the right direction for Arkansas.

At the 2012 ASA Open Water Swimming College National Championships (typically only attended by a few Texas college programs – but every National Championship has to have a foundation, right?) the Texas A&M Aggies finished 1-2-3 individually, and topped the team title with 301 points. That put them ahead of University of Incarnate Word and Trinity University: both out of San Antonio.

The 5km swim was raced in Lake Travis, just outside of Austin, with 2012 U.S. Olympian Cammile Adams winning in 1:01:51.3. For a swimmer whose lone stumble at last year’s NCAA Championships was the 500 free, where she failed to score, it’s great to see her kick off the post-Olympic year with some great distance freestyling.

She was followed about 30 seconds back by All-American distance swimmer Maureen McLaine in 1:02.23. Sprinter Lili Ibanez finished 3rd in 1:04.34.

The Missouri Men and Women swept their hosted Show Me Showdown over the weekend to kick off their tenure in the SEC, though a strong performance from Missour State kept the scoring relatively close.

The host Tigers swam off events in some places, so we didn’t get to see the full-force of either squad, but we did get a few tastes. Cassie Cunningham kicked off her year with a 56.24. For a swimmer who has designs on at least a top-16 finish at NCAA’s in this event last year, that’s a phenomenal season-opener for her, considering last year she opened up three seconds slower. If she can get to a 55-mid or low by early November, then she’s in store for a big season.

One of the Tigers’ biggest recruit in recent years, Dani Barbiea, kicked off her college career in stylish fashion with a win in the 100 fly in 56.31. Her fellow freshman Emily Doucette didn’t have a great swim in the 50 (24.27), but looked much better in the 100 with a 52.47 to tip Drury’s Wai Ting Yu.

Missouri State, as mentioned, had some great early-season swims here. Vitalii Baryshok won the 100 free in 45.39, ranking him 5th in the country this year among reported times.

Alabama kicked off the Dennis Pursely era with a win over Division II oponent Delta State, located in Mississippi.

Top honors for the Statesmen go to German freshman Karl-Richard Hennebach, who won the men’s 100 fly in 50.97. That puts him 3rd among Division II swimmers this year, and as the fastest freshman.

Not as big of a surprise when you consider her sister already swims there.