San Diego State, UC Santa Barbara Winning Big After Day One of the A3 Performance Invitational 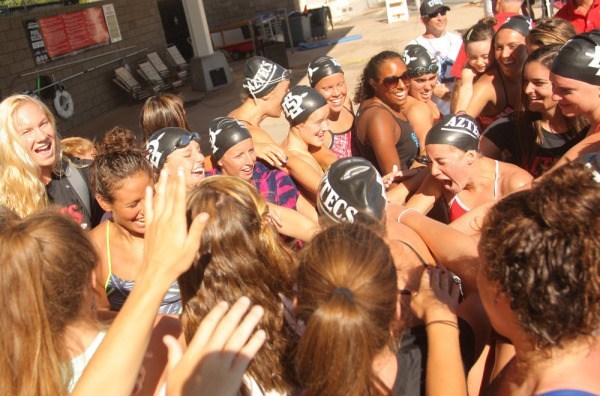 The San Diego State women and UCSB men are up big through day one of the A3 Performance Invitational, which features some strong teams from California and other western states. Archive photo via Stan Liu

The San Diego State women and UC Santa Barbara men are winning big through day one of the A3 performance invite, even without the advantage of relay victory points.

USC sent relays to the invitational but are not swimming individuals as they get ready for the Texas Invite and USA Swimming Nationals. The Trojans won both the 200 freestyle relays and 400 medley relays, and both the men’s and women’s teams have 128 points each thanks to the relay victories.

Team scores through day one:

The San Diego State A relay gave the Trojans a run for their money, with the Trojans winning by just .11 seconds.

San Diego State was also under the pool record, coming in at 1:30.01. Anika Apostalon, Chelsea Bailey, Whitney Weisz, and Taylor Johnson were the close runner ups. Anika Apostalon and Chelsea Bailey were out in front by over half a second, but the Trojans back half was too much for the Aztecs to hold off.

UC Santa Barbara was a second in 1:20.82. Wade Allen, Mikey Forbes, Lukas Paulauskas, and Chase Lemley did not have the speed over the second half to match the Trojans, as was the case in the women’s relay.

Riley Spitser of San Jose State Jumped out to the lead early and didn’t look back. She was 53.82 through the first 100 compared to Heren Alanis of UCSB’s 55.62.

Bakersfield’s Mitchell Huxhold dominated in the prelims, going 4:19.23, and albeit a bit slower in finals, he was still just as dominant on his was to the 32 points he won for his team.

Cal Poly Teammates Austin Cunniff and Dustin Bolt where 4:28.28 and 4:29.76 for third and fourth, respectively.

San Diego State got it’s second straight win of the evening with a 2:00.51 performance from Natilee Ruiz. UCSB’s Katie Records, was second in 2:00.91.

San Jose State secured a third place finish from Morgan McCormick, who was 2:02.97.

San Diego State’s Shannon Herman and Savannah Miller were sixth and seventh in 2:04.69 and 2:02.84, helping the Aztecs build on their lead early in the meet.

Dylan Kubick was the victor in 1:49.16 for UCSB, but not far behind was Mickey Mackle of Cal Poly, who took second with a 1:49.40. The race was close, with just .01 hundredth of a second separating the men going into the breaststroke.

Kubick out split Mackle on both the breaststroke and freestyle, by about a tenth on each leg, to take the narrow victory.

Another UCSB swimmer, Andy Lau, was disqualified from the A final.

San Diego State placed four swimmers in the A final, another two in the B final, and two in the C final.

Anika Apostalon won the A final in 22.41. Chelsea Bailey was second in 22.72 for the Aztecs, Taylor Johnson was fifth in 23.40, and Whitney Weisz was seventh in 23.58, to finish the scoring for San Diego State.

Jackie Taylor scored 7 points for the Toreros with her second place finish in the C final. Taylor swam a 23.70. Samantha Guttmacher was fifth in the C final in 23.88.

Only one swimmer broke 20 on Thursday, UCSB’s Wade Allen, who did it three times.

Hannah Weiss, Jasmine Tosky, Kendyl Stewart, and Kasia Wilk handily won the relay, setting another pool record for the trojans in the process. Weiss had the most impressive split with a 52.63 on the backstroke.

USC won their fourth relay of the day in just as convincing a fashion as the other three. Ralf Tribuntstov, Ridge Altman, Dylan Cart, and Domagala Michael finished in 3:12.79. Carter split a 46.79 on the butterfly leg, and Domagala Anchored in 43.85.

UCSB finished second in 3:18.20. Wade Allen had another solid swim, splitting 46.94 on the butterfly leg.