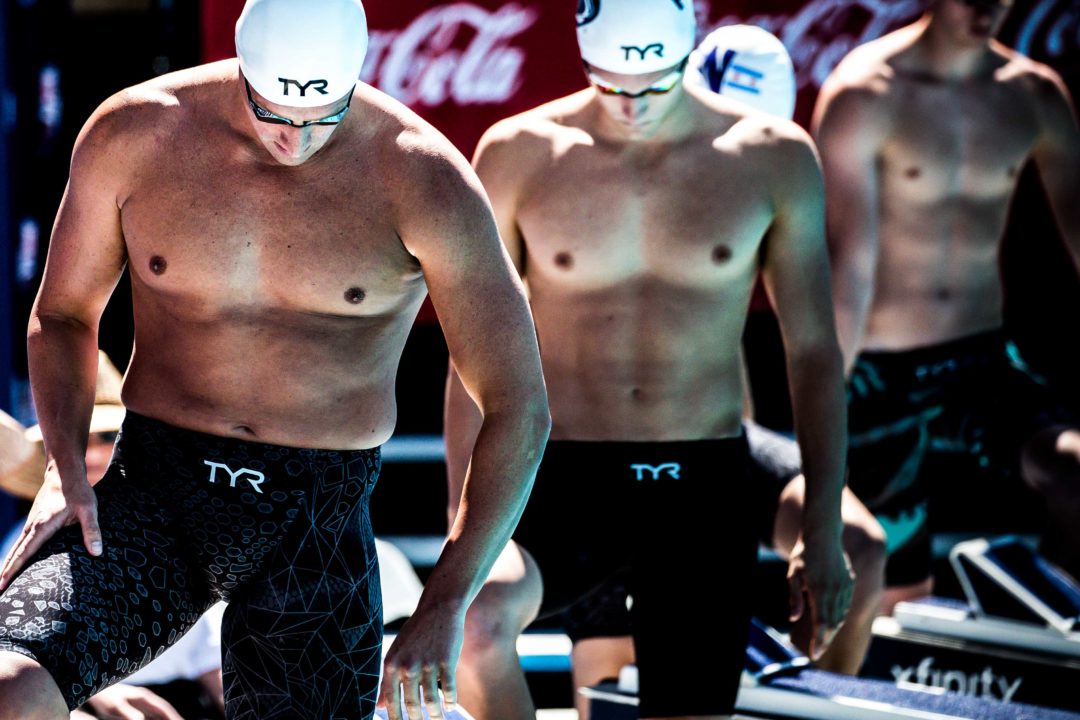 Ryan Lochte (above in the foreground from US Nationals) says that he's lost 21 pounds since the US National Championships in August when he won the 200 IM. Archive photo via Jack Spitser/Spitser Photography

Zoe Ammundsen and Ainsley Trotter both clocked a time of 1:03.05, which moves them up to #5 all-time amongst 14-year-old Australian girls.

American swimmer Ryan Lochte claims to have lost 21 pounds since his win in the 200 IM at the US National Championships 2 months ago in an Instagram post.

In the post, Lochte shared “before and after” photographs, with the first being at US Nationals, where he won the 200 IM in his first major competition back from suspension, the latter being labeled as October, 2019. The photo on the left is labeled as 217 pounds, while the photo on the right is labeled at 196 pounds. 196 pounds is similar to the weight at which he’s raced for most of his elite swimming career.

While not labeled as an advertisement, the post does appear to be a paid promotional post for a fitness tracking app.

Getting my groove back thanks to the help of @fitplan_app I’ve adjusted my diet and upgraded my fitness routine and I’m down 21 pounds since Nationals in August! Not only is it my goal to make my 5th olympics but it would be an honor to represent USA in Tokyo next Summer! Subscribe in bio! @tyrsport #teamtyr #myfitplan #usa #focused #onmygrind

Lochte returned at the US National Championships after serving a 14 months suspension for an anti-doping rules violation. That suspension resulted from an Instagram post as well – he posted a photo of he and his wife receiving an intravenous infusion of vitamins and fluids which are not banned, but the method by which he received them is. The reason for the ban on the method is primarily driven by the possibility of diluting any banned substances from appearing in an anti-doping control test.

The 35-year old Lochte is a 12-time Olympic medalist, including 6 gold medals. At his last Olympic Games in Rio, he won gold as part of the American men’s 800 free relay, but missed the podium in his only individual event, the 200 IM, where he was 5th in 1:57.47 (only a little faster than he was at US Nationals). Since Rio, he has served 2 suspensions, including one for what he called “over-exaggerating” an incident in a Rio gas station, which has limited the amount of racing he’s done since.

Ryan is the Britney Spears of swimming. Can we just leave Britney alone?

He is more than back …..loving this & everything that will happen until Trails / Tokyo . Its gonna be fun with Ryan back to swimming business .

having been in the shape he is now for 90+% of his life (achieved thru hard work in the 1st place).
after over a decade of troy training, his body was probably aching to get back into this shape

He probably saw that photo above and said wtf? Wouldn’t be surprised if he has it hanging by his weights and elliptical trainer.

He’s got the toilet in the background and the wife’s make up in foreground. It’s just so Lochte.

I hope he doesn’t have to full rest for trials.

would love to beleive you right now …..i know he can go there again .

He looked so bloated and out of shape and now he looks amazing! Not easy to do…Good for him!