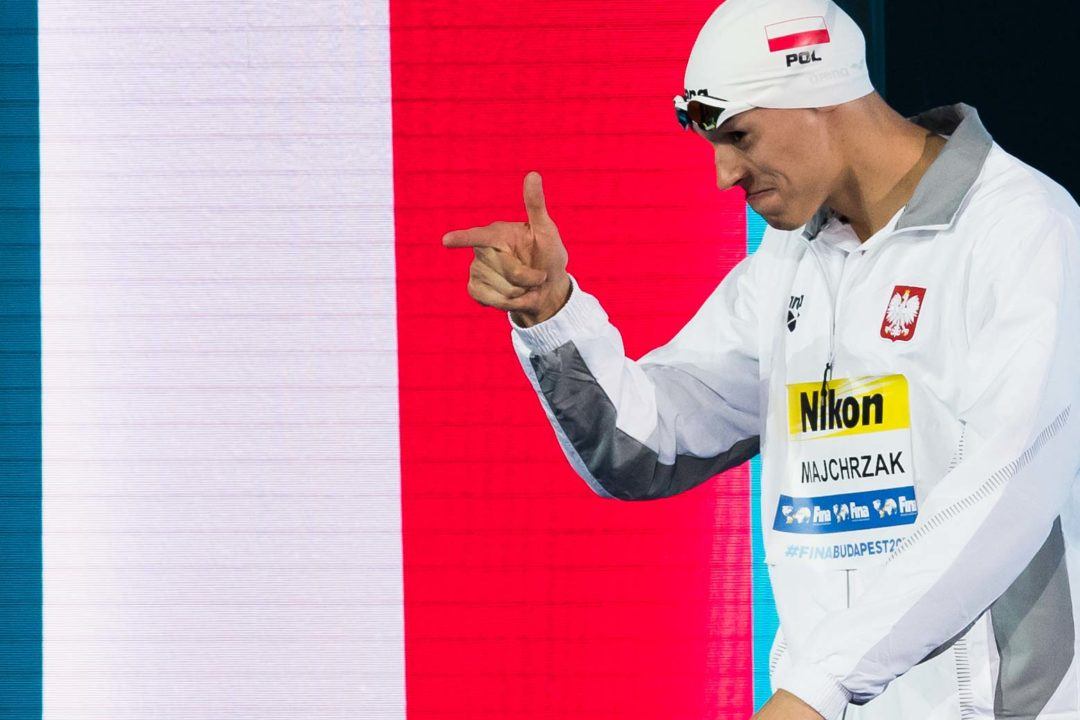 As swimmers all over the world remain stuck at home due to government-mandated lockdown measures, a rush of new social media challenges has captivated the web. Many swim teams separated by the pandemic have joined in on the action by completing the ‘Don’t Rush’ challenge. Featuring the song “Don’t Rush” by Young T & Bugsey (feat. Headie One), the challenge consists of a swimmer tapping the camera with a swim cap, which when removed reveals an outfit change from formal clothing to a swimsuit. The swimmer then throws the cap out of the frame, which the next swimmer then “catches” and begins their own sequence.

With many age group swim teams posting their own versions to social media, France’s national team completed the challenge, as seen in Florent Manaudou‘s recent Instagram post. Among those joining Manaudou in the video were 2016 Olympians Charlotte Bonnet, Mélanie Henique, and Damien Joly.

In response to France’s post, Russian national teamers recorded their own version of the challenge, beginning with 2018 Euro’s medalist, Anna Egorova catching and discarding a French swim cap. Egorova then picks up a Russian swim cap and passes it off to 2019 World Champs silver medalist Andrei Minakov.

Following Yuliya Efimova, Sergey Fesikov, Kirill Prigoda, among other Russian national teamers, Vlad Morozov ends the video by polishing off a trophy, picking up an American swim cap and tapping the camera with it. With this, he is seemingly challenging the US National Team to follow suit with the challenge. The Americans have yet to respond to the challenge.

After France and Russia’s videos, 13 of Poland’s national teamers completed the ‘Don’t Rush’ challenge. Olympians Kasia Wasik, Radoslaw Kawecki, and Kacper Majchrzak were among those featured, and like Russia, Poland challenged another national team. Ending the video with a frame that reads “We Nominate Australia”, Majchrzak shared the video to his Instagram, writing “Thanks to our swimmer friends for this funny idea! Don’t rush swimmers – we nominate the Australian Swimming Team for the next one! Let’s Roll!”

Morozov did not use the American cap to polish his trophies.
Nice try SwimSwam.

oops! didn’t notice that he switched out the towel for a cap – thanks for the catch, just edited

There should be a swimswam tik tok

Actually, there should be no tik tok at all. Just a psa

There shall be no cringe tok

University of Indianapolis has a good one