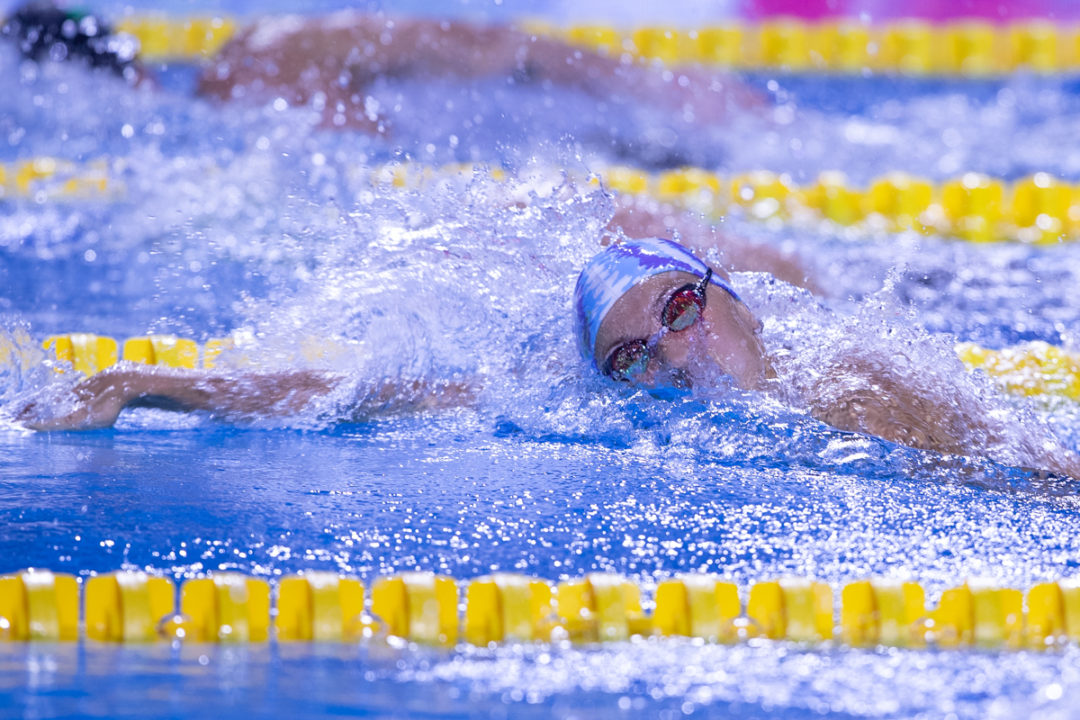 Veronika Andrusenko (above) is one of four swimmers who didn't qualify at the Olympic Trials, but who have been to Russia's tentative Olympic roster. Archive photo via “Rafael/Domeyko Photography”

The All-Russia Swimming Federation has announced both a tentative roster for the 2020 Olympic Games, as well as its roster for the upcoming European Aquatics Championships.

The announced Olympic roster includes 4 new names who did not hit qualifying standards at the recent Russian Olympic Trials.

On the men’s side, that list includes sprint freestyler Alexander Shchegolev, an 18-year old who swam a personal best of 48.24 in the 100 free at the recent Russian Olympic Trials.

His best time going into the meet was just 48.81, and he bettered that in four separate swims across a week of competition before landing over half-a-second faster. That time placed him 5th in the final of the event behind:

With three swimmers flat-starting under 48 seconds, Russia is in medal contention in this race later in the year at the Tokyo Olympics. Shchegolev’s emergence as a 5th, along with the already-qualified Ivan Girev at 48.34, gives the Russians some options to rest their stars in prelims and still sail safely into the final.

The other three additions came on the women’s side in the former of Veronika Andrusenko, Valeria Salamatina, and Daria K. Ustinova (the backstroker).

Andrusenko is one of the key swimmers and stars of the Russian team historically, including a finals swim and 8th-place finish in the 400 free at the 2019 World Championships.

But the 30-year old veteran might get the chance to swim the 200 free individually, but at a minimum will be a crucial relay leg for the Russians.

Meanwhile, Daria K. Ustinova, the backstroker (as compared to the similarly-named freestyler, who was already qualified), was chosen likely on the strength of her win in the 200 back in a time of 2:10.82. While half-a-second short of the FINA “A” standard for the Olympics, she has been as fast as 2:06 in that event, and so is still a finals threat.

The selection is pending the results of the Russian team’s upcoming training camp which begins on May 8 in Volvograd. That camp was originally scheduled for Turkey, but because of the ongoing global coronavirus pandemic, Russian leaders decided to hold the event domestically instead.

No events have been attached to the official selection, which means that the Russians have left themselves wiggle room to find ways to get swimmers where they need them – for example, Yulia Efimova, the defending World Champion in the 200 breaststroke, didn’t qualify in that event.

Russia has also outlined a roster of 30 pool athletes and 10 open water athletes for the 2021 European Aquatics Championships that will be held from May 10-23, 2021. The pool swimming events will run from May 17-23, while open water swimming runs from May 12-16.

The event will be a key preparation event for the Olympic Games in pool swimming and for the Olympic qualifying event in Setubal, Portugal in June for open water swimming.

As we’ve seen from several other countries, there are many more top-name athletes expected to participate than we normally see in an Olympic year. It’s not expected that most will be fully shaved or tapered, but the lineups will be deep.

That group will help fill some roster holes left by a list of “reserves” that includes names like Veronika Andrusenko, Daria S. Ustinova, and Vlad Morozov.

Countries are able to send 3 swimmers per event to preliminary rounds of the European Championships, so in the example of Belonogoff, there is room for extra swimmers even where all of the Olympians within a stroke group are attending.

Dratsev is 38 and still grinding

I would add the women’s 200 meter breaststroke with Chikunova.

Yes, you are right, i forgot that event. 200 breast should be super competitive. 2 women already sub 2:21 and american trials still to come.

Italy will send all top athletes. Roster done past week.

How does the FINA A Standard work for a country like Russia? I’m surprised that they are allowed to send athletes who don’t have that standard (to compete individually)?

If nobody hits an A cut a country can send the fastest person with a B cut. A cuts are for sending two athletes.

Obviously there are going to be swimmers whose best time is slower than 2.10.4 . Who do you think will make up the 6 or 7 heats ? Otters?

In Russia there are more qualifiers with A standard then places in Olympic team and even in relays. A standard time didn’t even get some place in relay team. So what is your question about?

Did they qualify a relay?

I think so, as long as Russia is allowed to send relay teams. They won 4×200 silver in Gwangju.