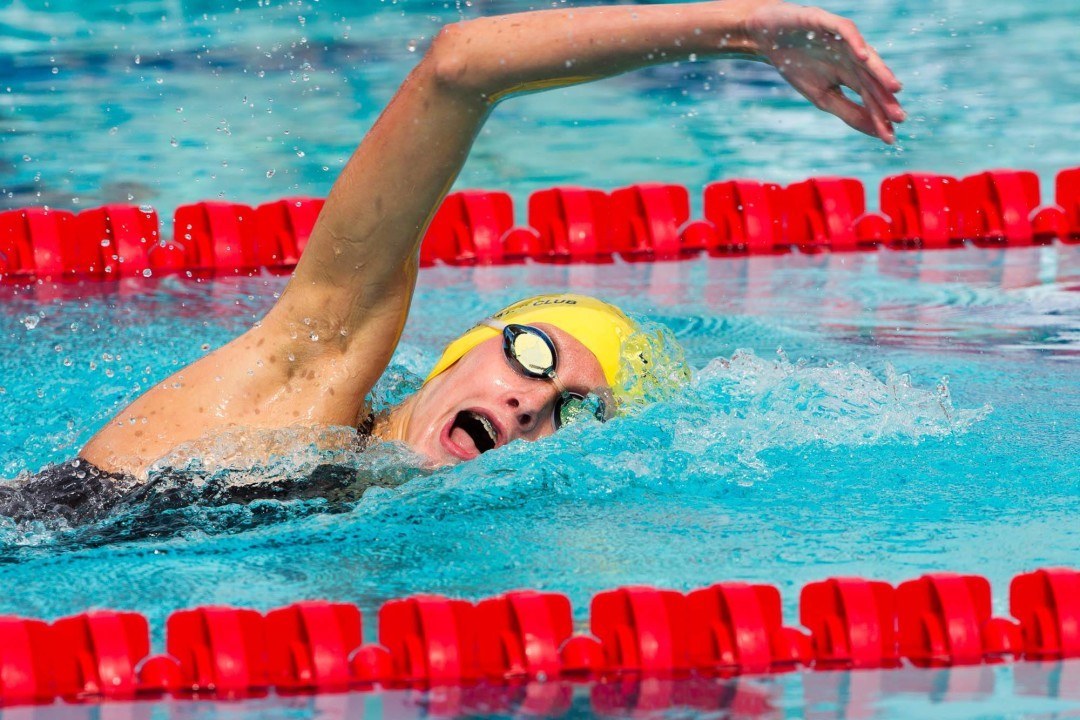 Taylor Ruck has been an intriguing junior prospect at the domestic level for several years now. But this summer's Junior World Championships seem to be serving notice that Ruck has arrived on an even bigger stage. Archive photo via Tim Binning/TheSwimPictures.com

In the shuffle of Australia’s junior world record and Tamsin Cook‘s meet-record leadoff leg, it was easy to overlook a game-changing swim further back in the 4×200 free relay field from Canada’s Taylor Ruck.

But the 15-year-old Ruck came up with perhaps the swim of the night anchoring second-place Canada, putting up a split with some international significance in the senior ranks as well as the juniors.

Ruck blasted a 1:56.71 on her leg, the best split in the field by well over a second. In fact, her split was enough to bring her team back from a 2.3-second deficit on Russia for the silver medal, even though Russia’s Anastasiia Kirpichnikova had a very solid (relative to the rest of the field) 1:59.5 split herself.

But Ruck made the entire field look a bit pedestrian with a split that would have fit right in at the World Championships a few weeks ago.

Put Ruck on that Canadian World Champs relay and the team moves from 11th place overall into the medal final.

Though one could look at that as a missed opportunity for Canada, it’s just as easy to see it as an exciting prospect for the future. That World Champs relay was already young, with 17-year-old Emily Overholt dropping the best split. Adding Ruck to the team down the road should give Team Canada two elite young talents to pair together as they look to get into international medal contention.

Ruck lives and trains in Arizona, competing with USA Swimming’s Scottsdale Aquatic Club. Ruck represents Canada internationally, though she’d be good enough to help Team USA in a big way. Put Ruck on the American relay at Junior Worlds and the team repeats as Junior World champs and breaks their own junior world record by a wide margin.

On top of that, Ruck’s split in Singapore would have made her the third-fastest on Team USA’s gold medal-winning relay in Kazan, behind only Missy Franklin and Katie Ledecky.

Ruck has been an intriguing junior prospect at the domestic level for several years now. But this summer’s Junior World Championships seem to be serving notice that Ruck has arrived on an even bigger stage.

The Canadian junior relay was faster than their senior relay by 0.27

Bobo has been raving about Ruck since…forever. I think his first Ruck post was just after her first swimming lesson, when she was 3, and she was way faster than the 4 year olds. 🙂

Most excellent swim for Ms. Ruck. Really looking forward to seeing her rock the rest of her individual events.