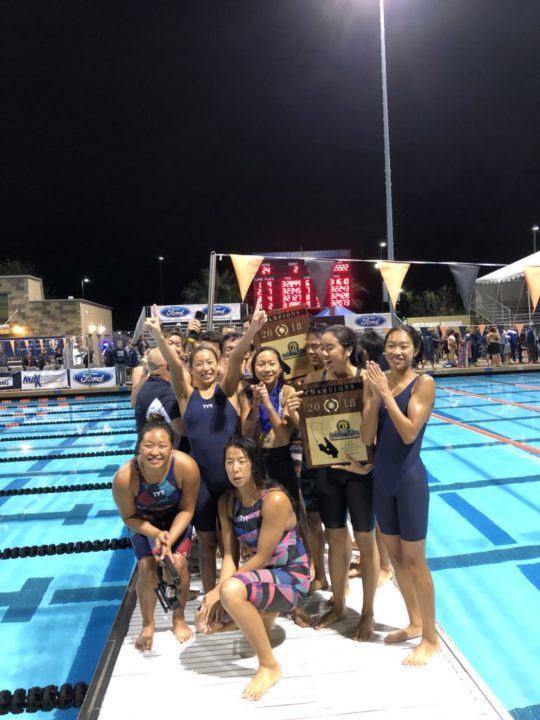 Rowland High School swept the titles as the 2018 CIF – Southern Section Division 4 championship meet on Friday in Riverside. For the boys, this marked a 2nd-straight title (after finishing just 19th the year before), while for the girls this was the a step up the ladder after finishing 2nd in each of the last two seasons.

In its early stages, this meet was a highly-competitive team battle. Rowland won the opening 200 medley relay in 1:53.72, placing just .13 seconds ahead of Downey, who were runners-up both in that relay and the meet. Rowland is set up to dominate this relay for a long time, with a squad that included 3 freshmen, a sophomore, and a butterflier Azurine Chang who split 27.05: faster than her team’s freestyle anchor.

Nguyen was one of only two female swimmers in the meet to post automatic state championship qualifying times. She did so in both that 50 free and in her later win in the 100 free, where she finished in 51.57. Grand Terrace freshman sprinter Destany Lewis will join her at the state meet after a 23.81 in the 50 that also automatically qualifies for state. She finished as the runner-up in the 100 free as well (53.65), but the latter was short of the state championship consideration time.

4 individual wins and a sweep of the relays for Rowland, who saved their sprint star Nguyen for the free relays, was enough to help Rowland cruise to the Division 4 title.

While the boys from La Salle High School in Pasadena were just 7th in the team battle, 2 spots lower than last year, Friday marked the end of the sectionals career of one of the best swimmers in school history: James Torrez. The George Washington-bound swimmer won both the 100 fly (50.70) and 100 back (51.10) for the 3rd-consecutive year to qualify for the state meet.

Torrez also split 24.24 on the backstroke leg as he led off La Salle’s championship-winning 200 medley relay to a 1:40.27 win. He was joined by Andrew Lee, Derek Chen, and James Desjarlals to give La Salle a 3rd event victory of the day.

Torrez was one of two boys at the meet to automatically qualify through to the CIF state championship meet. The other was Ocean View junior Dominic Falcon, who won the 500 free in 4:32.83 to win the 500 free – about a second short of his best time from Sectionals in March. Falcon’s swim is also an All-American consideration time: the only swim to meet that standard in the meet.

Falcon also won the 200 free in 1:41.21, which is a state consideration time and exactly 3 seconds faster than runner-up Ethan Smith of Vistamar.

The meet’s other double winner was Maranatha senior Tanner Gish, who won both the 50 free (21.82) and 100 free (47.70), the latter of which missed a state consideration time by .01 seconds. Those mark the first two wins of his high school career.

Astonishingly, Rowland took the overall team title without winning a single event. Their best finishes came in the 200 medley and 400 free relays, where they were 2nd.