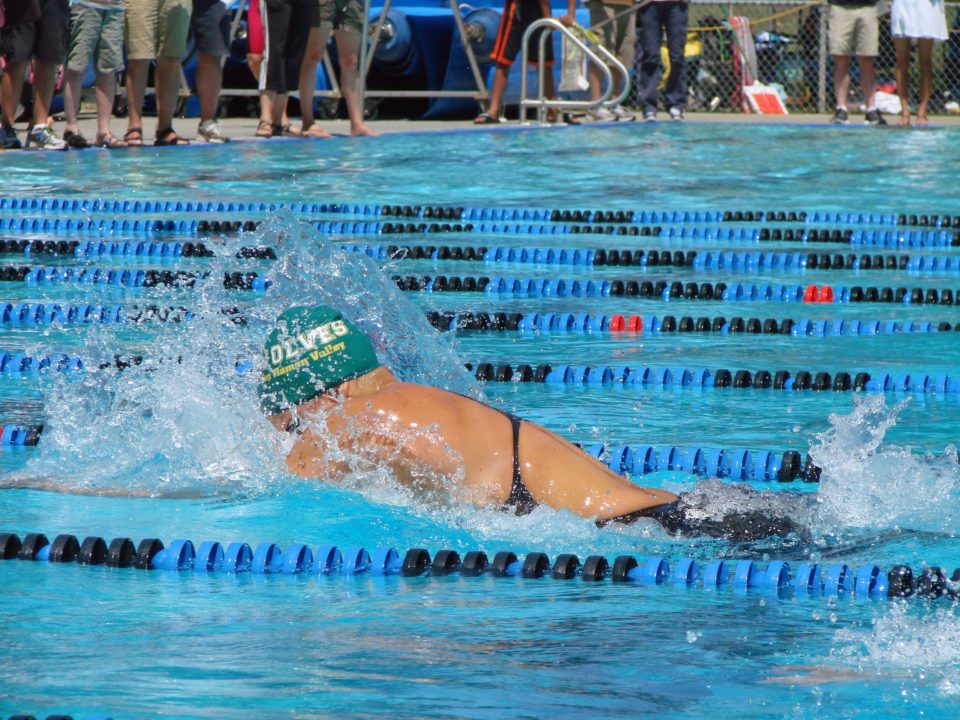 Heidi Poppe led the way on the women's side on Friday at the California North Coast Section Championships. Current photo via Dean Ottati

As indicated in the 2014 NCS Meet Preview (here), it didn’t appear that the very top end of this year’s NCS championship meet, would be quite as fast as last year.  But also as expected, many of the races were tightly contested, and as a result the times required to get into a championship final (8th) or consolation final (16th) were in many cases faster than last year.  There were only a few swimmers in this meet that could afford to hold much back and still expect to make a final.   Still, there were several new NCS records set.

One of the questions going into today’s meet was:  Can sophomore Maxime Rooney of Granada break the NCS 200 Free and 500 freestyles records?  Tonight we know the answer is an emphatic yes!

But Rooney was not quite finished with his record breaking day.  He very nearly broke the NCS 100 free record by leading off the 400 free relay in 44.29.  Instead Rooney, along with his Granada teammates Bryce McLaggan (Sr.), Trent Trump (Sr., Grand Canyon) and Nick Silverthorn (Sr., Cal) will have to be content with setting a new NCS record in the 400 Free Relay: 3:00.13.  In the preview to this meet, SwimSwam wondered if this Granada team could break 3:00.  From where this reporter sat, it appeared Granada was playing it safe on their starts, and they could do it tomorrow.  Granada will be chased by the men of Northgate (3:05.05) and the small school wonder College Prep (3:06.75).  The same four men of Granada were very close to the NCS record in the 200 Medley Relay, finishing in 1:30.80.  If they can shave just under 3/10ths off that time tomorrow, they will break that record too.

In the women’s 200 Free Relay, two teams broke the existing NCS record.  Carondelet qualified first in a 1:34.35, but they were closely followed by the women of San Ramon Valley who finished in a 1:34.52.  Tomorrow these two teams will be swimming next to each other, and the adrenaline should ramp up.

The men of Castro Valley also get a little more SwimSwam love for qualifying first in the 200 Free Relay.  One question for tomorrow, when all the teams are finally racing next to each other, will be can they get a little more out of the first leg and stay ahead of the wave?

Maddie Murphy (So., Carondelet) is tough.  She will head into tomorrow’s 100 free final as the top seed, but she will do it right after the 100 fly final where she is seeded third.  Brittany Usinger (Jr., Accalanes is the top qualifier in the 100 fly.

Arjun Sharma (Jr. College Prep) – 48.59 and teammate Grant Watson (So., College Prep)—49.22 head into the 100 fly final as the top two seeds.  Normally having the two top qualifiers is enough for College Prep to earn the small school shout out, but small schools have their own set of ever changing and arbitrary criteria, and you can’t win it in every article boys!  Maybe tomorrow.  Probably tomorrow cuz you look to be headed to a top five team finish.

Call it a hunch, but it seems like Nick Bigot (Jr. Terra Linda), the top qualifier in the 100 free (44.9) has a little more left for tomorrow.

As expected, Nick Silverthorn (Sr., Granada) heads into the 100 breaststroke as the top seed.  But what might not have been quite so expected is just how close the field is.  Silverthorn posted a 55.1, but in a different heat, Hank Poppe (So., SRV) found yet another gear in the last 10 yards to finish in a 55.47.  Carson Sand and Stanley Wu also finished under 56.  Breaststroke is apparently alive and well in Northern California.  Today 24 guys broke a minute.

As all schools, large and small, compete directly in the NCS Swimming Championships, today’s small school shout out goes to the men and women of The Athenian School (~300 total students).  In the 50 year history of NCS swimming, Athenian has only ever scored points in two of those years, and each time it was a single individual making the consolation finals.  Athenian has never had a relay have a second swim. This year, Athenian will have 3 relays swimming in the consolation finals tomorrow (Men’s 200 MR, Women’s 200 FR, Mens 200 FR).  Athenian also boasts its first two championship finalists:  Freshman Emma Cottril will go into the women’s 50 free as the top qualifier, where she will be chased by a very tightly packed field of experienced seniors, and Junior Zach Ottati (disclosure alert – yes, he’s related) will be in the championship finals of the 100 fly where he will be chasing a packed field.  Ottati will also appear in the 100 Back consolation finals as well as Nate Borchers (Sr., Trinity) who will make an appearance in the consolation finals of the 500 free.  The Athenian Owls are on the rise.

On the women’s side, SRV appears to be in control, but the battle for second place is wide open.  Carondelet, Campolindo, and Amador Valley are all about even.  Amador Valley had 3 top 10 divers, but only one top 8 relay.  Carondelet has 2 relays seeded first, but one in consols.  Meanwhile, Campolindo has 3 relays in the top 8.  Every place will matter in this race.

The men’s side is too close to call.  Northgate and Granada are going mano a mano, with Campolindo lurking in third.  Northgate has at least one swimmer or relay in every A final, but no divers.  Granada had 3 divers finish in the top 10, but only two relays in the finals.  Look for things to heat up right away in the men’s team race.  In the Medley Relay, Granada and Northgate are the top two seeds, and in the 200 free these two teams account for 5 of the 8 finalists.  Again, every point will count in the team race.

Unsolicited Advice to All of Tomorrow’s Finalists.

After each championship final, it’s an NCS tradition to hand each finalist a flower along with their medal.  To all of you receiving flowers, know this: You earn big points with your parents when you come into the stands and give your flower to them.  Your parents will be proud, and you’ll hear several ooh’s and aah’s from the other parents nearby.   Enjoy the moment.  There are so precious few of these high school championship meets.

This year’s championship finals will be held at the Concord Community Pool in Concord, California.  Racing begins tomorrow at 10:30 AM.

Results may be found on SwimPhone: Here

I remember watching Mr Rooney in video 3 or 4 years ago at the Far Western championships and he was already impressive very young. Happy to see him continue to improve being older. 1.35 and 4.20 are great times for a sophomore in high school! And these are only prelims! I believe he’s pretty good in the 200 fly as well.

And after Ally Howe, Heidi Poppe shows her talent.
Stanford recruits look really good this weekend.
It would be cool to see her break the minute barrier in the 100 breast before going to college.