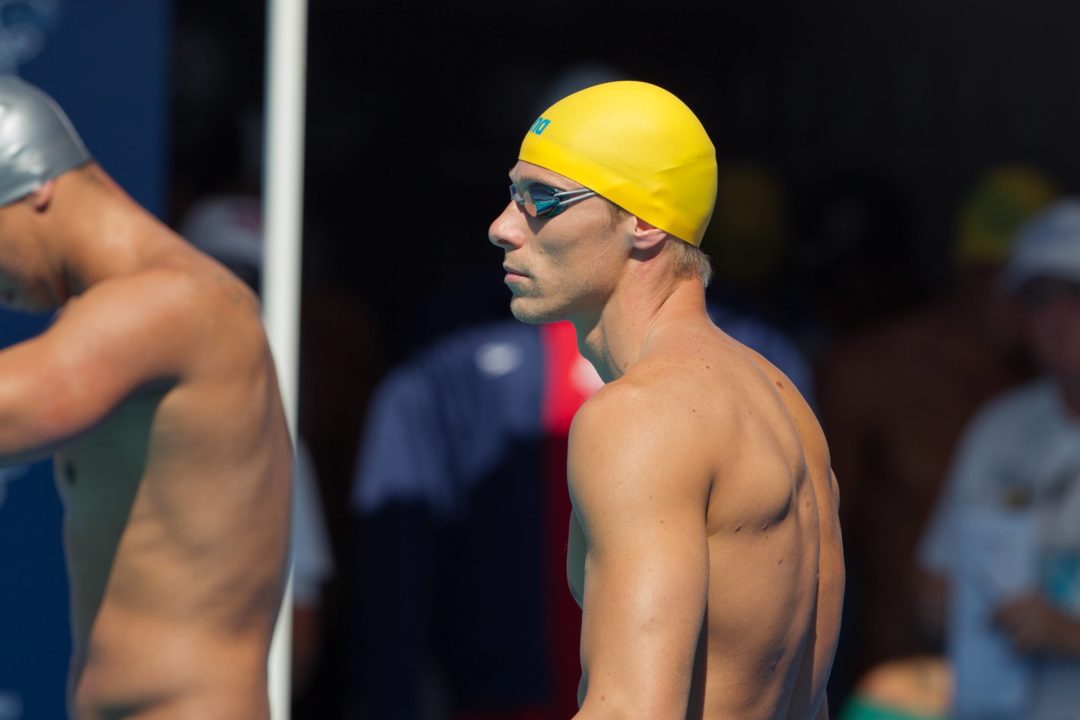 When Cielo tested positive for banned diuretic furosemide in 2011 and did not get suspended, Schoeman said that the case "set a dangerous precedent."

On his former coach Brett Hawke‘s podcast “Inside with Brett Hawke” last week, Roland Schoeman revealed he apologized to Cesar Cielo (also a former Hawke disciple) for past critical comments after Cielo had a positive anti-doping test in 2011.

“Heading into it, or beforehand, there was a level of judgement or ignorance on my part. I think specifically to when Cesar tested positive,” Schoeman says. “I think most athletes function from a level of ignorance because it’s not currently in their awareness – testing positive. After I tested positive, and the results came out, I sent a message to Cesar and said ‘I’m so sorry. Because I judged you based on a level of ignorance, or a perception within my conscious that didn’t take everything into consideration.'”

When the world record holder Cielo and three of his Brazilian teammates tested positive for the banned diuretic furosemide in May 2011, his South African contemporary Schoeman vocally objected to the Court of Arbitration for Sport’s decision to uphold a lack of punishment for three of the swimmers (Vinicius Waked was given a one-year ban).

In an editorial he penned for The Swimmers Circle (which later became part of SwimSwam), and in a since-deleted tweet, Schoeman said that CAS “set a dangerous precedent,” and that the four were indisputably “guilty of a doping offense.” Adding fuel to Schoeman’s fire was that Cielo was cleared in time to competed at the 2011 World Championships.

CAS let Cielo and two teammates off under the precedent that banned substance had been ingested accidentally via a contaminated, prescribed caffeine supplement.

Almost exactly eight years later, Schoeman found himself in a similar situation. The then-38-year-old tested positive for banned substance GW501516 in May 2019, a drug obtained on the black market and considered to be a cancer risk. The test did not become public until February 2020, when it was announced that Schoeman is serving a one-year ban retroactive to the initial positive test.

Schoeman spend about $16,500 to test over 20 supplements for a source of contamination, and was not able to find one, but got off with a one-year ban for a variety of reasons that lead the FINA Doping Panel to believe he ingested the substance accidentally (infractions of this type usually get two years).

Despite the ban, the Olympic postponement opens the door for Schoeman to qualify for a fifth Games after he is reinstated on May 18. He would have missed South African Nationals, which were originally scheduled for April 4-9, but were rescheduled even before the delay was official.

Check out Schoeman’s full interview below:

eh i believe him. sue me

Does anyone believe this guy? He’s seemingly playing this right out of the “Lance Armstrong School Of Lying” playbook.

I’d be more inclined to believe him if he’d have done what he originally released in his statement: say no more about it.

well, how the table turns…

I bet Cielo, Nicholas dos Santos, Henrique Barbosa and Vinicius Waked (Brazilian teammates) who all tested positive for Furosemide are like leave us out of this.

There is no sympathy

This guy really knows how to spin things to make him look like the victim. All we know for sure is he tested positive and he says it was contamination. Everything else is just spin. He wasn’t cleared he just got a reduced ban.

Probably was contaminated by those monkeys.

og reference. schoeman seems to always have been a bit arrogant and it never changed

Apology not accepted? Karma’s a bitch.

Does the doping advantage really matter for a man competing at 38 years of age? I have always wondered how much time you would drop from doping, would it even be worth it?

What you are saying is it’s ok for certain people to dope.
Is that what you are insinuating? I remember Dara Torres was swimming better at 40 and she got in amazing shape.

Dara Torres is a legend

Arguably the most impactful class of steroids for swimmers would be those that accelerate the recovery process, allowing an athlete to train more without breaking down, or to recover better between races. Those would be especially effective for an older athlete, who would typically not recover nearly as well as an athlete in their teens or early 20s.

This ^ how many athletes who were once clean decided to dope later on in order to keep their careers going.

The botox and hair plugs of the swimming world

Just go to any masters nationals, and you’ll see…

If being honest and a fair sport is important, no it’s not worth it. certain EPOs will definitely make you stronger through the fact they let you recover faster so you can train harder. Do movie stars get ripped in 6 months over the age of 40? All the time. But sports have rules against such drugs, so if you want to compete in most pro sports, this discussion isn’t relevant to anything

Ignoring the dumbness of question 1, on 2, it depends on the drugs.

Sophisticated, blatant doping in the vein of Armstrong/East Germany can give huge benefits. However, that kind of relies on everyone else being on the juice, otherwise it’s just too obvious.

It’s maybe 1-2% for something like the Clear (the steroid made infamous by Balco). Endurance athletes can get big benefits from EPO, but first an effective test and latterly blood passports have hopefully significantly curbed that.

Ultimately though, 1-2% at the elite level is the difference between gold and going out in the semis. That’s why people still dope.

I am trying to say that at such an old age I can’t see the reason for doping, I haven’t heard of a magical drug that can drop 2 seconds in the 100 free it just doesn’t make any sense